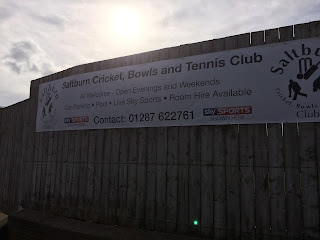 I was nervous as I walked through Saltburn on Sunday morning, one of the North Yorkshire's most underrated coastal towns in my opinion.  This club just HAD to be open.  How else would I fulfil my Mum's wish of visiting my FINAL Yorkshire pub with her on Mothers Day?

My last trip up here had been fraught with disaster, but with the sun shining down on me and a stiff but mild North Westerly (or something), I knew today was going to be different.

A padlocked fence around the cricket, bowls and tennis clubs didn't help my heart, but my hopes were raised when I found a building tucked behind it all, THE CLUB, and an open door!! 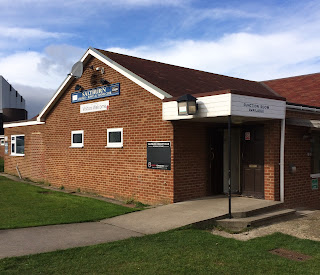 My joy was short lived however as I wandered in to find the place in darkness, shutters down over the bar.  I know fellow pub ticker Duncan Mackay would wrench it up and pull himself a pint and down it in one in this situation, but I'm merely a junior pub ticker so I tiptoed from room to room, until I found an old couple drinking coffee and reading papers......


I felt a bit awful disrupting their peace but "OI CHUMPS WHEN YOU BLOODY OPENING EH?  11:30AM GBG N WHATPUB MEAN ANYTHING TO YA?!"  They told me "just after 12 noon, so to be polite, I stood in the bracing wind outside in my long black veil and waited forlornly.  Like a faithful dog waiting for it's dead master to return.

I had a nice chat with a young bar bloke who obviously thought it weird, me looking so delighted to be here seconds after opening, so I bored him with BRAPA for  a few minutes until other customers arrived.  I didn't have to show my CAMRA card, sign or book or owt,  Take that Skipton!  After admiring the view of the cricket pitch through the low windows, and then the massive trophy collection, two Indian lads came in with cricket bats.  A bit off season I thought.    And then the locals descended and it became proper clubby.  Much Middlesbrough moaning "we are relegated!" was a big theme, having to say "happy birthday Dave" was another.  A ladder had been propped up at the bar, presumably for me to walk under, and they started putting up a curtain as a partition which hid the real ales - so was glad when they gave up on the idea completely.  What is the worst type of Twild?  A ginger one of course, well there were FOUR of them with Adam Henson playing the role of "Dad".  The young girl wanted a glass of pepsi.  "Do you want vodka in that?" asked an old local.  "What is vodka Daddy?" (possibly quote of the day).  "Wait til the last match of the season, then you'll find out!" was the old man's reply.  The girl was upset when her twild brothers went outside. "They are not playing, darling" said Mummy Henson, "they are practising football!"  Classic.  As if this family couldn't get any better, they then complained about the lack of Caffreys.  "It's just not selling", said old man steward, "you're the only ones who drink it".  Ginger twilds?  Caffreys?  Who were these people?!  I was then asked to appraise my real ale, very good - "and why should we listen to YOU?" asked old local.  "Because I am BRAPA" is what I wanted to say, but the young barman told him I drink a pint in every GBG pub, and that shut him up!  Time to go.  Crazy but wonderful place.


I walked back through Saltburn, took a bit of sea air on the pier, and had a lamb samosa like all good seaside people do, and then my bus arrived on time amazingly and 35 mins later, I was in Staithes. 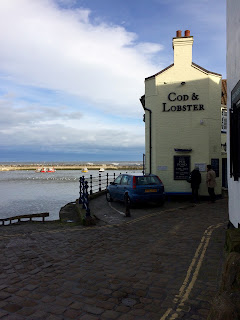 Yes, it was wall to wall diners and the only space in this small but homely pub was at the bar, so only one thing for it, I swung off my coat, scarf and bag with the certainty of a chap who was even fooling the three regulars into thinking he was a regular!  If that makes sense.  After a few nods and "ayes", I settled down with a pint of some rebadged house beer nonsense, served by a friendly barmaid with the most glittery eye make-up ever witnessed in BRAPA history.  Taking photos of any aspect of the pub was impossible, it was cheek to jowl and even lifting my pint was a struggle.  Writing notes about people sat 2 inches away felt a bit wrong too!  The nicest man turned out to be the landlord, I think, but this experience reminded me very much of when I sat at the bar in the Speaker in Westminster!  Spookily, we all had to say "happy birthday" to a man again (probably called Dave) and an Indian family turned up, not with cricket bats this time, but their order of chicken nuggets and coffee to a table outside, was the most dramatic it got apart from a mushy peas v garden peas faux pas.  Almost everyone else ordered scampi cos they think they are in Whitby, tourist idiots!  It was good to see close-hand how hard staff work at busy times, not helped by a ruddy faced young man who came downstairs, revealed he was feeling rough from night before, and went back upstairs to bed immediately.  I drank up in 25 mins and was glad to be out of there, would love to go on a quiet wintry midweek night.

I climbed back up this really steep hill, and nearer the bus stop was this forboding looking building, looming large in the fading light, quite sinister and finding the front door was a challenge .....

This was a happy, smiling pub from the moment I entered, loved the green and white colour scheme, quite unusual, felt like being in a Plymouth Argyle supporters club and locals moved to let me see the the pumps.  However, I was being a bit freaked out by a man who looked like a homeless Jimmy Savile with walking sticks, propping up the bar and staring in my direction.  It later turned out he was former landlord Trevor who had to give it up when his eyesight failed, so I was hopeful he couldn't see me.  I was served by a lovely young brunette made almost entirely of flannelette, like a granddad's nightshirt.  Another stand out barman was the athletic Kyle Kane, so named by me cos he supported Spurs, was glad to see them winning 4-0 and looked like their entire starting 11 amalgamated into one.  He was everywhere, until he totally let himself down by putting the rugby on!  The pub couldn't believe it.  But good news for one man, who's marriage had been on the rocks since he asked his wife to move from a nice sunny large window seat to a dingy side table so he could have a better view of the game!  She rolled her eyes, and mouthed to me "what a wanker he is" or something (I've never been a good lip reader).  I'd missed my bus so ordered another one - my beer was from Kent (obviously) and about 6% but I didn't notice that as I'd pressured myself into it due to Trevor.  Apart from one customer who stood at the bar "accidentally" touching everyone's arse, the rest of the pub descended to a table next to mine (friendly old duffers), and started looking at pictures and YouTube videos of bird boxes (??) on their mobile phones - for about 10 minutes!  One of the blokes then had the temerity to make the following social observation  "you'd be lost without it wouldn't you?" I agreed with him, declining to mention bird-box-gate.  But we soon got chatting - the art of letter writing has been lost apparently, but soon I was on more familiar BRAPA territory and I soon realised the whole pub was listening!  And it was huge room.  An audience with Simon Everitt.  Wennington pub garden all over again.  It even allowed estranged husband to escape his wife's evil glances, nip out and check the score, as she was listening to me from the far window.  Utter classic!

I took the bus back into Saltburn, really fancied some fish & chips as I had an hour to kill before my train home.  It was dark and very windy, and suddenly all I could see was pizza places!  Earlier, loads of fish n chips at 11am.  Silly Saltburn.  But then, I saw some gleaming handpumps from a modern glass window and I could see the lights flashing "pre-emptive" so I decided to investigate.....

I asked the barmaid (a cute young thing who still hadn't learnt that it was okay to talk to strangers if you work in a bar) how long this'd been here and she said it opened less than a year ago.  Not sure if it was a micro,  it didn't feel limited enough and just had 4 ales on(!) and a cider, and more than one loo and a decent area downstairs/upstairs too.  Plus they had some quite nice features.  But then to prove the day had come full circle, a family containing ginger twilds arrived and they all gurgled in my ear'ole for the next 20 minutes.  The door then inexplicably opened and slammed shut on it's own - and me and the barmaid looked at each other like "definitely a ghost!"  Not sure if this is a co-incidence or not but something weird followed.  Remember that embarrassing Brit Awards where Sam Fox and Mick Fleetwood co-hosted, very badly?  Well, a gothic Mick Fleetwood and a beetlejuice Sam Fox suddenly appeared at the bar.  All a bit too much for me, and whilst I admired the bar for looking a bit like my new bathroom flooring, I left before I was anymore freaked out!

I think this was the most fun BRAPA day of 2017 so far, and there've been some great ones.  I now take a break for Pancake Day on Tuesday (today as I write this) and to take stock of a fruitful Feb.

I'll be back for a month end review but I have a surprise early March trip to look forward to!