BRAPA - A Day of Two Halves in Leiceister (not in the beer sense!)

Why have I never FULLY enjoyed any of my 7 trips to Leicester?  I can't blame them for Hull City's usual inability to 'perform' here, but the pubs and the general lack of warmth and 'giving' from the natives are what we really get my (regimental) goat.

The people of Leicester must have HATED winning the Premier League.  They had to be happy and joyous.  It can't have felt right.  Pub blogger extraordinaire Martin Taylor appraised my favourite Leicester pub Ale Wagon as "perhaps Britain's grumpiest pub".  What he (probably) meant was that it encapsulated the city better than any other.  And that is the sign of a truly great pub.

Why else does Leicester legend Gary Lineker spend every Saturday evening trying to recreate the "Ale Wagon experience" on faux bench seating opposite Alan Shearer, a man with all the charm and charisma of an Ale Wagon regular?  "I'm off home to creosote my fence" MUST be a stock phrase uttered here.

I know a very nice man from Leicester called Richard (no he's not a hunchback who lives under a carpark).  He's a pub man, an ale man, a kind Leicester fan, very humble, supportive of BRAPA too.  But even his helpful local knowledge hasn't helped me get the best out of pubs in the City.

Their lack of shelf life is a problem - "The Pub" was hailed as a wonderful new thing about 5 years ago, by 2pm on same day, the TEN handpulls started running out at an alarming rate, I don't think it ever recovered.  Then it closed and got re-branded.   "The Salmon" supposedly amazing, my 600th BRAPA pub in fact, high anticipation, but a blocked piss-plunging disappointment with dull beer and disinterested staff.  This is why I didn't go with any "pre-emptives" I was recommended today.....they could all be dead within a year!

'Twas just my Leicester luck, we'd got in before 11am, the sun was out, the Hull City scum were singing, we ran as far across town as we could to this 11am opener, the Charlotte, but it was shut, and I don't mean "not open yet shut", I mean "CLOSED DOWN PROPER SHUT!"  Peering in through the windows, rats seemed to be nibbling on the landlord's carcass in the middle of the floor (okay, I might be exaggerating) but it had been closed down for 2 weeks, so a ruddy faced man in Leicester Tigers shirt told us in a rare display of 'communicative local looks you in the eye' behaviour.

All my other earmarked pubs were 12 noon openers, but we all know what the saving grace is in situations such as this ..... SPOOOOOONS!

A pub tick is a pub tick, is the best you could say about this bustling 'Spoons.  Dad jokes about "a pint of Wetherspoons" meaning they all have that standard stock taste (not gravy, quite), though his friend takes him literally and thinks he thinks there is a beer called 'Wetherspoons' can you imagine?!  I've actually had some wonderful Wetherspoons pints (Maltby, Bury, Castleford to name just three), just never with Dad, so I blame a combination of him and my "Leicester luck" for the fact that both our beers tasted identical, not awful, just boring and tired.  Despite being a huge place, Dad did well to find us a table in the sun, and when a strange bearded creature knocked on the window and waved at us, you could be forgiven for thinking this was a Wehterspoons 'character' until the presence of Tom Irvin was looming large over our table, with his usual greeting "we're going to lose today".  He's rarely wrong these days.  And the poor lad had just come from another 'Spoons, and two seasons ago, we went to ANOTHER one, called Last Plantagenet which had some tardy service in the extreme.  "A second rate king for a second rate Spoons" to paraphrase David Starkey.   Time to move on.

We stood outside  pub two and waited down this side street pub, fairly huge and modern looking, at 11:57am until they opened pretty much bang on 12 and we were inside.  I ordered an Everards Tiger because (a) it had a 3D pump clip (b) it might be lucky for Hull City and (c) it seemed the Leicesterly thing to do.  It wasn't really up to scratch.  Young bar chap was friendly with a "this isn't a proper boozer you do realise that?" kind of a smirk and soon we were sat in some hideous leather bench booths in an area called "Pub Garden Kitchen".  Not quite "Bowling Room" is it?   Another neon sign said "Lel" whatever that means.  LE1 perhaps?  It certainly wasn't lol.  Well, until a posho woman spied her posho friend, stared at her drink, said "what is THAT?", the reply "THAT is water!"  Thanks for Tom for encouraging me to use that exchange.  We then scowled at a menu on a blackboard, Tom suggesting this was a contender for BRAPA worst pub of the year but it was more Theale-bland than outer-Wolverhampton-thoroughly-upsetting.  It was utterly dull though. 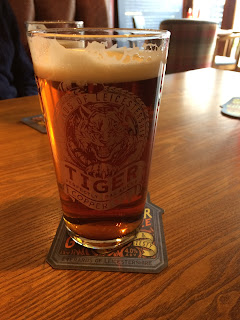 It was at this stage of the day where Dad had a "Good Beer Guide" crisis of confidence, denouncing my 'bible' as little more than a selection of pubs entered at random into the GBG.   The real problem, I tried to explain, is that Leicester has been given a WAY too big allocation - probably to give it similar rights to Nottingham and Derby - but about five or six would do.

Even so, I felt like I (as a staunch GBG advocate!) was under scrutiny just as much as Leicester,  the next pub simply HAD to deliver ..... 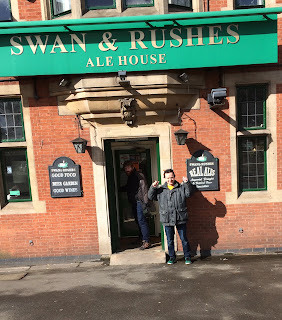 It didn't help matters that Richard who I mentioned earlier, told me (at a Scunthorpe fan's 30th birthday in Hull!) that this pub had gone downhill in recent years.  But as soon as Tom opened the inner door and we walked up to the bar, Oakham ales gleaming, moody looking Leicester old men, a very straightforward pricing policy (see below), carpets, seats, basically, a proper pub, I knew we'd recovered and we'd be here to stay.  So typical then of Dad to say he was almost disappointed it was good and we were staying(!), "just imagine how many pubs we could've got done if we kept hopping from rubbish pub to pub!" And if this was the pub going "downhill", how good must it have been before?  We managed to save a huge table just for us 3 (and Ben when he arrived for a quick one after 2) which was quite an achievement when you think how high the influx of Leicesterites was due to this pub being quite near the ground. I was the only Hull City shirt in here, and was this the reason why, at 2pm when I went for the final round, it took over TEN minutes to get served??  I'd already noticed the staff were a bit slow but the locals, having prodded and picked at me for a few mins before realising I belonged to the same species and they could talk to me (no eye contact of course), wondered if my City shirt was causing the issue and they all went off to another bar like I was some leper!  Anyway, i was served about two seconds later so in yer face Foxes!  It'd been a great pre-match session and the earlier woes were a distant memory.


We'll gloss over that little thing called a football match, and it was pouring with rain by now but we had time before the train, and I'd seen a pub between ground and station, with a 'trophy' next to it, meaning it had won some pub of the year award or something ..... 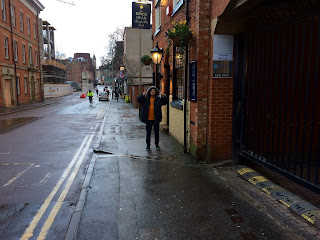 Ohhhh  yesss, and suddenly Leicester's pub redemption is complete!  This was the pub that Dad rated "even better than the Swan and Rushes" and you know what, I think I may just have to agree.  And a proper backstreet boozer with an Ale Wagon-esque crowd of curmudgeonly old locals - you'd have thought they lost 0-5 judging by their expressions, simply marvellous.  Vintage Leicester, and after craning our necks over the post-match barflies to get served, we shared a table with a sleeping version of the Elephant Man and I noticed a pub cat, totally unfazed like all good pub cats, asleep on the table next to me.  Poor thing though, I think Leicester fans are dog people cos they kept coming in, patting it's head, and scratching it's back like they'd not learnt the art of cat stroking before.  It suffered in stoic silence, yawned, and pretended the outside world didn't exist, you could tell it was a Leicester pub cat.  Before I could breathe, a man we always see after away games came to moan at us about Hull City for about 20 mins.  We were like "chill out dude, you're in an award winning pub, stroke the cat and/or elephant man and relax". 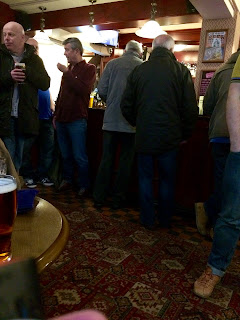 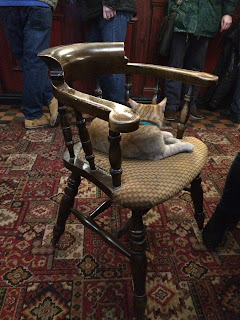 So only 5 GBG pubs to do in Leicester for now, I don't suppose we'll play there next season and I'm not due to do the county of Leicestershire til the year 2032 but I will be back!