BRAPA - From Dukinfield to Slaithwaite

If anyone tells you they've visited Dukinfield, or that they even know where it is, then they are lying.  They are probably trying to impress you, but as I walked through the grey drizzly windswept streets of Ashton-under-Lyne on the edgy A627 (my green leather jacket and odd gloves nearly caused me to be the victim of a drive-by shooting), I realised I'd still have to wait 30 minutes for the pub to open.

Solace came in the form of a pie shop, Martins to be precise (and note the lack of apostrophe making it inferior to Paula's, across from the pub, which our very own Martin (Taylor) visited on his trip). The pies weren't labelled at all so I asked the girl which types they were.  "Which one?" she asked, a dim response I thought seeing as EVERY pie looked the same.  I settled on a gorgeous cottage pie, with a crusty layer and cheesy topping, and ate it on a swing in Dukinfield Park, in the rain.

Who says I don't do classy?  This was living and breathing Dukinfield.  The Town Hall was very nice too, and the lovely Lizards chap off Twitter told me a famous racing driver was born here.  Nora Batty or something?!

So yes, I felt like Mr Dukinfield by the time the pub doors swung open at 12 noon and 54 seconds, though one barmaid immediately legged it across the road to Paula's, but the other one assured me pub was open and I was drinking this £2.55 pint of a beer from another made-up place (Mobberley or somewhere) and very good it was too!  I took it to the raised area of this fantastic lounge bar to the right - there was a chilly looking pool room to the left, and again, I was using Martin's blog to give me pointers throughout my 30 mins here.  Red is a nice warming colour, good for pubs, but this was red in the extreme - the reddest pub I've been in since that Salopian Bar in Shrewsbury.  I got the impression it wasn't an out and out ale pub though as adverts for Smirnoff, 2 for 1 shots, and Guinness 'bunting' were hanging everywhere.  I had to suffer a large screen with Keith Andrews trying to be a football pundit as the White Shite took on another horrific club in the kind of fixture that actually really wants me to see Hull City get an automatic 'bye' into League One.  But I loved being the only customer, and this was a real sturdy street corner local which you can't ever imagine not standing here.    The two barmaids munched Paula's baps in the corner, all was well. Oh yes, and weren't the toilets noisy?  Loudest extractor fan ever. 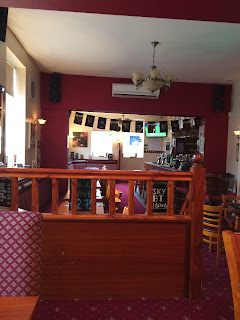 I walked back into Ashton-under-Lyne where, like almost every Greater Manchester place I visited in 2015/16, had a new pub for me to tick off, so I went .... obviously.

It was immediate from the outset that this was also a self proclaimed "concert venue", or gig dive if you are being more truthful.   I have to admit, I never find pubs doubling as music venues to be the best (Alma, Bolton and Purple Turtle, Reading are two examples) but this was better than both,  though a bit rough and ready.  A blonde skinny girl with her tummy out called Sarah - stock phrase "Fooookin' Dick'ead" - turned round to smile at all new arrivals, before swiftly turning away in disappointment, and she was giving relationship advice to a man in a tracksuit with an impressive chin.  I ordered a Draught Bass as a 'thanks' to Martin for guiding me through the Dukinfield process, but found it a bit limp which may have been quality rather than the ale itself, I never have any luck with it!  Zouch was one example, when a dog tried to drown itself in the canal.  I was served by a barmaid with obligatory tattoo sleeve and nose piercings.  Me and a few old blokes watched "Come Dine with Me" and it caused much hilarity and heckling, like we were watching a sports event!  Sadly, they left just as I was bonding with them.  An old couple replaced them.  The old dear sat down, she had no teeth but necked a pint of Thornbridge Jaipur (5.9%) in a way that put me to shame.  And if that didn't sum up this pub, I don't know what did.


The rain was now teeming down on Tameside as I ventured tram-wards towards Droylsden, a place I've always wanted to go to.  This is mainly because I've seen their football team play away from home three times with performances ranging from "workmanlike" to "stodgy" to "inept".

The one recurring factor of the Bloods(?  Or is that Saffron Walden Town?) performances is that they never make playing football look easy, effortles or pleasurable.

Despite the weather, something strange happened.  People started smiling at me!  Ahhh, this must be the friendly part of the region.   And after some needless faffing around near a shopping precinct, I found the pub on the main road .....

Evident straight away that I was not only in a local's pub, but a bit of a classic.  Beautiful little place, wood panelling ,warm - though I had to bite my tongue when an old dear saw the state of me and remarked "oooh, 'as it started raining?!"  "It's safe to say it has!" was my restrained reply.  Sarcasm may've not worked.  I dried off and went straight to the loo where I got into conversation with a Scotch bloke who told me not to complain about the weather because he lives in a place called Wishaw and it's far worse up there!  I hadn't even said a word to him at this point, but he seemed like a good fellow.  Time to settle down then but immediately noticed my ale tasted off.  Sour, chemically, not traditionally sulphur "off", it didn't even look terrible.  I hate taking pints back, but had no qualms in this instance.  As I waited for the barmaid to reappear, a local lager drinker helped appraise it - but he wasn't sure not being an ale drinker.  But the barmaid's attitude (a redoubtable old looking lady who seemed to have been there a long time) was simply that another bloke had just drunk 2 pints of it and not complained i.e. it must be me!  She didn't taste or smell it herself.  It smelt of wee!  I nearly did an Alan Partridge-esque "SMELL MY BEER!" It was the only ale on, but before I could consider going onto the keg Boddies, she'd already pulled me another.  Initially, I thought it seemed improved but as time went on, it got worse and worse.  Of course, I felt too awkward by now to take it back again, so eventually left the last third or so!  It's rare in my BRAPA challenge to have a bad pint but it can happen to the best of pubs, it's more the manner of how it is dealt with.  In fact, when it happened in Armthorpe a year ago, the staff actually turned it into a positive experience by being so good about it!  And it 'soured' what would've been a really good pub experience.  I did later have a DM chat on Twitter with a (younger) member of staff about the incident, which made me feel better about things.  I even got a Droylsden pre-emtpive recommendation out of it so good on 'em!  Every cloud.....


I couldn't end on a bad note, and my train was going through Slaithwaite - one of three remaining West Yorkshire ticks.  It was still only 4pm so I decided to fit it in.

What I hadn't accounted for, "Transpennine Scum!"  Ugh, awful bunch, and something about men and women in their 50's and 60's acting like 20 year old tossers that really depresses me.  I thought people had stopped doing this ale trail 5 years ago, especially on a wet wintry day like this.

I got quite lucky really, a load got off in Marsden, and the ones who joined me at Slaithwaite ALL went down into the town, instead of up and around this cobbled bank like me.  I even did a little celebratory jig in the rain, I was THAT pleased to see not one following me to this pub!

And yet, something in my mind was telling me THIS was the mystery pub I did at the end of my inaugural Transpennine crawl  11th July 2009.  I'd got VERY drunk that day but had been sobered up in Marsden and this, the last pub, I remember the steepish walk and the low loungey area, lots of Mum's with twilds and disco equipment by the bar - and it WAS the same pub!

But as I said in my piece on Hebden Bridge yesterday, you shouldn't stereotype folk, it'll only come back to haunt you.  And so it was, my heart did sink when I saw six Transpennine blokes making a massive meal of ordering their pints - one was complaining he wanted a Farmers Blonde and not a Bingley Something (not it's real name) and cos he'd had a sip, she wasn't allowed to change it!  So I just elbowed in amongst them and got served by the two jolly barmaids.  The group went to sit at the far end, and were good as gold, but I didn't expect it at the time, so sat at the near end, near two locals - the capped John Torode and evil Gregg Wallace of Slaithwaite, only more objectionable.  I can deal with bad language (even though I don't condone it), but these two absolute fuckers were on the "Wokingham Paint Stained Overalls" level of people who make your skin crawl.  I can't do it justice, one theme was their obsession with wide arsed women, getting a series of women staff along to surreptitiously compare them like something in a cattle market.  The staff laughed along with them, but you could tell no-one liked them.  They even tried to start an argument with someone in the busier right hand bar, because they didn't like his brother.  Still, I wasn't taking my pint for granted and enjoyed it immensely. and this'd be a cracking pub in the right circumstances.

Back to York before I did any more damage, after all, the MAIN event was still to come on Sunday in what was a weekend festival of pub-ticking, and a good time to do it as my flat doesn't feel like my own until I get a shower put in!