A hastily arranged day off work and overnight stopover took me to Warrington for the first time in my life, being a town that doesn't have a football team though I did almost consider stopping off here on the way back from "L is for Llandudno" in 2013, but I ran out of time.

Cheshire (along with Bucks) is the main focus now for the British Real Ale Pub Adventure, and although Alsager is next alphabetically having done Agden Wharf last year, the 2pm Saturday opening time continues to annoy me so I went for the next one along, Appleton Thorn with it's limited clubby opening times.  The 8E was late setting off due to chatty bus drivers, everyone was either cockney or scouse on this bus.

A bit of confusion on arrival as I was greeted by two women smiling expectantly from behind a desk, with boxes on the table and some polling booths just behind them.  Luckily I spied a window through to a bar, pushed an unpromising looking wooden door, and inside was seated half the village waiting expectantly for the smiling barman to 'pull the ales through' - it was 19:30, same as the opening time, so I tried not to look too eager for a pint!  They'd be waiting all week for this moment.  Having said that, I was second to be served after a 10 year old coca-cola drinker so it was some classic queue jumping I'd pay for in Leicester two days later.  I also ordered a pork and apple pie, which he said he'd bring through to me, 30 minutes later but worth the wait!  The hall was a grand place with huge vaulted ceiling and curtains, a nice echo, a bit like a religious beer festival.  I was a bit scared by the ancient agricultural machinery, and wondered if the pitchfork was used to chase pub bloggers out of the village if they complained about tardy pies.  Some off-putting lycra clad men started handing out beermats, and like he could read my mind, gave me one for my beer, and one for a souvenir!  Some lost looking people came in, wondering if the bar was where they voted!  Whether the Appleton Thorn by-election had a surprisingly high or low turnout, I think this excellent Village Hall can be held entirely responsible.  The bus was a bit late, as car after car arrived so I played "pint drinker or voter?" judging by the occupants of each vehicle. 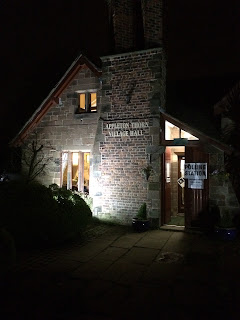 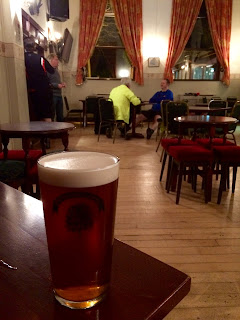 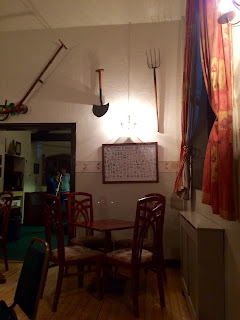 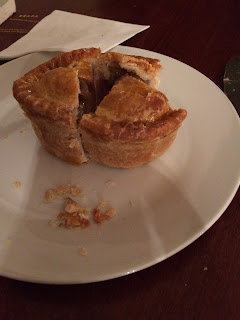 The bus driver seemed in a hurry (well, if your mates hadn't been stood around gassing earlier, you wouldn't have to rush now!) and I pretty much jumped out of a moving vehicle at Stockton Heath straight into the next pub. 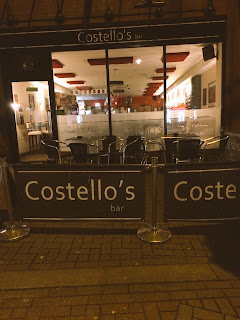 It all felt very familiar until I realised I'd been to a bar with the same name (and feel) in Altrincham, selling wonderful beers by Dunham Massey and Lymm, but also lacking a bit of proper pub fibre.  Though warm and comfortable it was.  I also wonder if Lymm's Brewery Tap is one of these two, it seemed to have the same 'beer menus' on the tables.  A friendly barmaid with the high pitched whine of a Twild served me, meaning the neighbourhood dogs started barking and bats started circling the premises.  As I stood at the bar, the staff did that off-putting "where are all our customers tonight?" as though my presence actually reduced the number present.  I sat in a booth near four no nonsense men, one had a grey tracksuit on which looked to be an extension of his skin, and he spoke passionately on the topic of vaping, and went outside 4 times during my stay, returning to say things like "smell that .... custard, mmmm" which was a bit weird.  An extended version of pub favourite "Bad Moon Rising" played for about 20 minutes, until the regulars started joining in.  And then an excitable local Jonjo Shelvey won a bet with his wife about how long this bar had been open, and jabbed her aggressively in the chest in celebration.  They met up with another couple but the man was sent away for "being annoying" in what seemed to be the least successful wife-swapping I've seen in a pub so far, and believe me, you do see it in the north-west with unerring regularity. 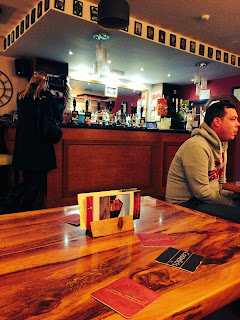 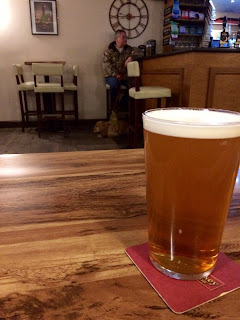 From a comment of Twitter, it was hard to know whether I was supposed to think Stockton Heath was a salubrious posh-hole or a down and out scroat-hole, but as I passed some shifty looking hooded individuals near a bookies, I was in the next pub, or should I say the first pub, of the night. 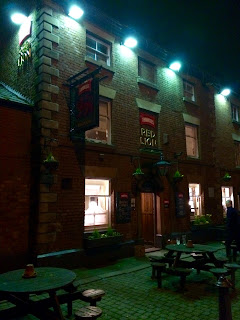 This was much more how I'd imagined 'Warrington' pubs in my mind's eye on the train over here, a proper no nonsense multi-roomed Thwaites house, making the most of itself with top quality ale, a happy joyful clientele (note to Costello's, here's where your 'customers' are - a proper pub) and people crowded in front of a rugby league match which was causing much hilarity as L**ds were getting a tonking.  Nice to see dislike of the White/Rhino shite spans different sports, and binds us all together from Warrington to Hull and back again.  Heart warming.  As was the tiny little "bowling room" where I was fortunate to get myself seated opposite 3 young student nerds who reminded me of me and my friends on night's out, getting frustrated with Untappd and making weird comments - the highlight being "we are all chess pieces if you think about it" and yes, it was meant literally.  However, putting your phone on loudspeaker to chat with a hungover friend was a lack of pub etiquette which is harder to forgive.  Like the face-timing Grandma/Grandson in Settle that time, ugh!  The barman had obviously been told eye-contact was important when dealing with the public, he took it to the nth degree, but I liked him.  The students and only other people in the room all left, just as another couple came and sat down - "is it something we said?" they joked.  "It's okay" I said, "at least I'm still here!" They didn't look thrilled.   Really good pub this.


I walked back over this bridge past a couple of motorway ring roads and before I knew it, I was back in Warrington and still time for a last orders drink, after all the GBG said this closes at midnight and it was only just half ten ....

When you walk into a pub and the first thing you hear from one of the old blokes sat at the far end of the bar is "the thing about fucking Southerners is that they get so fucking easily offended!" is that this is 100% pub.  Well that and my sudden need to order a pint of Warrington Special Bitter in t'most Northern way I could muster - ey up mate, paaarnt of that WSB or whatever it's called laaakkke". (I got told I was too posh to have ever lived in Barnsley the other day!)   I think I got away with it, though I was slightly terrified.  Bar assistant Paige, was already clearing up, and Maurice, the most vociferous of the 'end of the bar gang' bought her a pint.  She looked like an honest lass, working hard to make ends meet to feed her child.  Speaking of which, the pub also had free quiche on which seemed totally uninkeeping with the situation.  I didn't dare risk going for a slice, whichever way you take that, it could've ended my life!  The pub was a hive of Warrington Wolves paraphernalia and must be lively on match days.  I sat on one of those awkward barrel stools (whoever thought they made good pub tables should be shot, where do you put your legs?) One thing I couldn't get over was the weird smell of the pub, something that'd become something of a Warrington theme but more on that tomorrow.   Yet in a strange way, I quite liked this place. 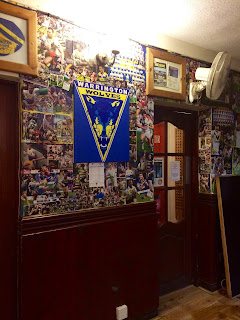 For now, it was back to my refreshingly archaic Travelodge which had actual KEYS rather than swipey cards.  Still, nice to get a shower and that there was no denying after 2 weeks only being able to do the vitals in the sink.  And on that note, see you all tomorrow for day two.