After a traumatic day at work where I first walked through a blizzard, and then found out in a nerve-wracking redundancy meeting that I WILL be keeping my job after all (almost a shame as Tom had worked out I needed to move to Stoke Gifford), I was ready for a pint, or two (or seven).

And so it got to 4pm and I was ready for the final trip to West Yorkshire (well, until September) and chance to try out a new railway station, at a place called Crossflatts which I'd always thought was called Crossflapps.

After a stroll along the menacing B6265, I was (eventually) confronted by a huge cow made of wire and I'd knew I'd arrived: 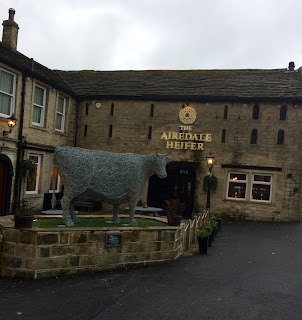 Although confronted by one of my pub pet hates, those piles of logs which are always for show and never EVER put on an actual fire, the pub had a warmth and friendliness about it despite being vast and suspiciously foodie.  The barmaid was one of those characters, I broke her off in mid sentence as she was about to ask me "what style of beer I liked" but undaunted, she told me the new five pound notes "will never be the same".  I laughed, a bit confused, noted the cosiest pub areas near limp fake fires were taken, so sat on a huge table with a fine array of Amstel beermats in the shadow of a poor cow, that had been force-fed til it was 312 stone by an evil man of the cloth.  I almost collided with three school teenagers, too old to be twilds, but they loved running from one door to the other, opening them, giving weather reports to 'Mum' (barmaid), and then running to the next door to cause a chilly through draught.  "No it isn't snowing, but it might be sleet!" was the general theme.  The one local at the bar nodded sagely, and made a vague presentiment that spring was not quite here yet.  No one cared so he left the building.  As I noted piped Bryan Adams and a specials board offering Rosemary Jus, I suspected this'd be an easy pub to criticise, but the warm feeling and great pint of Bridgehouse left me feeling pretty contented about the place.


I got the (obviously delayed) Shuttle bus into Keighley, where each passenger smelt of either wee or weed and had tea cosies or hoodies pulled up over their heads, and a five minute walk down the road from the bus station greeted me with one of Keighley's more picturesque landscapes: 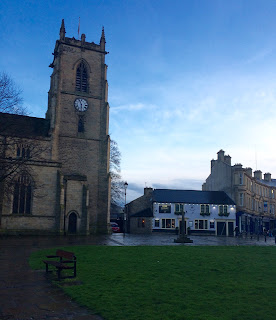 So I had a great feeling about this place before I entered, and being confronted with a healthy range of Timothy Taylor beers also added to my sense of Keighley wellbeing, as I was served by a friendly young moon-faced blonde who said "do you want anyfink ewse?" and looked generally happy but vacant.  As I looked around me though, I suddenly realised why it had that horrid "bar and kitchen" tagline - half the "pub" was diners only, and they seemed to be afforded more traditional snug pub seating than the drinkers area - as I witnessed when a group of oddball twenty somethings lurked in the doorway as though they didn't know how pubs operate, before nervously saying they had a table booked.  The place was near on empty.  Then a disturbing ginger slob resembling the Airedale Heifer waddled to the bar, bought a shot for his girlfriend in an obnoxious way, then waved two menus around like he was landing an aeroplane, before ordering food.  Girlfriend looked embarrassed, Miss Moonface remained pleasant and professional.  The church bells next door tolled, but couldn't drown out the piped reggae, but at least a trip to the loo made me realise an almost snug area facing the ale pumps was a bit cosier.  But on the whole, finishing West Yorkshire here isn't to be recommended, and when you think how good Brown Cow and Cricketers are, what is the point of all this?


I wandered back to the station, half tempted to pop into the Self Publicist Arms and ask for a pint of BEST BITTER to see if I got thrown out / corrected / beaten up, but alas my train was due very soon.

And there we have it, West Yorkshire complete for a second time, and only 3 pubs left in the whole of Yorkshire which I hope to mop up on Saturday (x2) and Sunday (x1).  So see you then.

And what of the future of my Tuesday night after work BRAPA trips, I hear you ask (or is that just the voices in my head)??  Well, I've identified an achievable one in Notts, possibly Lincs, a good few in Greater Manchester, and I'll take another look at Lancs too but suspect they are too rural.  It'll more likely be once or twice a month now, until September where we'll no doubt have new Yorkshire challenges to look at.