BRAPA - The Frustrations of North Yorkshire

So this was the weekend when I would finally finish my home county of North Yorkshire (or so I thought), after almost three years of dedicated effort, missed buses, chauffering genius, Theakstons, Black Sheep and pubs masquerading as restaurants, or vice versa.

It'd all come full circle as my first designated NY day was in Aldbrough St John & Manfield, when I escaped Tour De Yorkshire scum in July '14, and I was back in the same area on Saturday.  To spice things up, we temporarily crossed the border into Co. Durham for an 11am opener ......

I should've really been in Hastings / Battle for pub tick 1066 but too late to worry about that, and in the warm sunshine, we found a side door marked "Welly entrance" which I'd like to think was a tribute to Hull's Wellington which also had a side entrance that opened five minutes before the front, alas I think it was for walkers with muddy boots.  The friendly barmaids knew we were waiting, but a staff conflab surrounding 'foody tactics' meant "The Fox Hole Kitchen (and vague pub)" would've been a worthier title.  We sat in an overly tight window seat for two to wait for them to organise themselves.  Our first ales pulled through were used for fish batter, so the most wired barmaid told Dad, which helped us get one of the most cracking quality BRAPA pints of the year so far.  Striking portraits of grimacing old locals, probably bemoaning their village pubs demise into restaurant territory, looked down on us, and we were glad we were in here bang on 11am as 'reserved' signs littered the tables.  A blackboard said "free beer" and got me excited but it wasn't forthcoming.  And piped reggae reminded me of Keighley's Lord Rodney Bar & Kitchen, and despite the lack of church bells today, I decided I shouldn't moan too much!

If you were wondering the real motive behind a foray into County Durham, it was to demonstrate to Dad (BRAPA chauffeur extraordinaire) that his 'skills' are easily be transferable from North Yorkshire to Co Durham without much effort!  After all, with Yorkshire almost complete, we had to discuss "his future" and negotiate a new contract - he proved his Lincolnshire worth in Louth a couple of months back, and now he's proved his future is secure by agreeing to some south Durham requests.

However, the immediate challenge was not yet complete and a short drive south to another pretty North Yorkshire village, Melsonby, was about as frustrating as BRAPA gets.

We pulled up at 12:03pm to see a smiley raffle prize Easter Egg lady balancing 12 of the things, waiting on the pub doorstep looking confused.  I joked they'd surely never had THREE people waiting for opening before, and would wonder what's going on, when I noticed a blackboard clearly stating 5:30pm opener on a Saturday!  Which is rather anti-social isn't it? 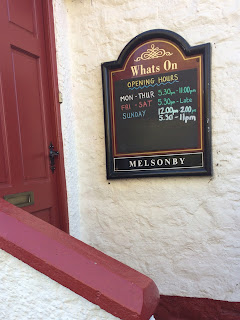 Both the Good Beer Guide and Whatpub had said 12 noon opening, and even more damning, Mrs Easter Egg had been chatting to the landlady only last night and was sure she'd said she'd be open at noon.  We found a phone number and rang, straight to voicemail.  I peered in 3 windows, all very dark.  Oh well. "it is what it is" (Dad's favourite phrase) so we moved on.

It was time to adapt.  Special mention now goes to Mummy Everitt, her of Welsh Ankle fame.  She'd insisted on being present at my final Yorkshire tick - West Haddlesey the following day.  But now, it'd be Melsonby I'd finish in, so how would she feel about doing that instead on April 2nd and we do West Haddlesey today without her?  No problem.  Top Mum BRAPA work.

If all this seemed complicated and traumatic, the A1 up here was closed in about a million different places and by the time we found a route to Hunton (through Richmond), we'd been going over an hour to get about 8 miles and were thoroughly traumatised and in need of a pint!  It seemed a lovely rural setting.  You know when the GBG says "off the beaten track", it means "impossible to get to". 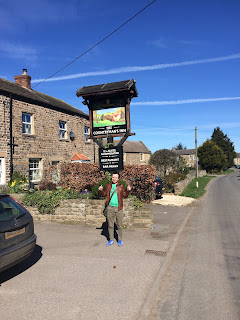 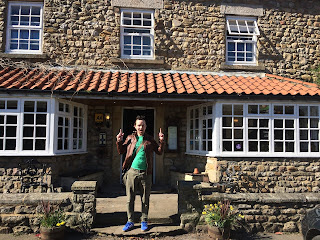 And this closes at 2:30pm apparently and was now gone 1:30pm so kind of just relieved to see it open under the circumstances!  I think I'd have ripped my GBG in two and run off crying.  But our Half Moon ales were seriously vinegary and after some debate (just to be sure, still a bit scarred from Droylsden!), we returned them.  The landlord's total lack of reaction and surprise seemed, errrm, surprising!  He changed them with good grace though, turned the pump clip straight round, but a bit of empathy wouldn't have gone amiss.  Didn't he want to smell/taste the beer for himself?  A jolly red faced one armed landlady appeared in what was 'BRAPA cameo of the day', shame she didn't stick around, she must be the charisma behind the pub.    Meanwhile, he helped a tourist book a taxi to a golf club, and talked him through the beers noting "those two gents said the Half Moon is off, so I'll need to investigate that" which I really hope wasn't code for "I'm turning the pump clip back round as soon as these dimwits drive off".  It all felt a bit Llansillin York Guzzler.  Golf club man got a shock when he turned around to see his wife had vanished, but she'd gone outside to escape.  We enjoyed our replacement ales, and no longer had any qualms about smuggling our cheese n onion pasties.  Then the landlord went outside to spy on us through the window, pretending to tend to his window boxes, see if I'd wired the pub to a listening device etc.  It was that kind of a pub.


After a bladder busting drive back down the A1 towards Selby, we finally reached West Haddlesey.  It's fair to say it had been a weird day (even by BRAPA standards), could it get weirder?  Yes it could!

So if we hark back to late January, I was fuming about this place when we left Hull City v Man Utd early, so we could get here at 10:20pm, with their advertised closing hours of midnight, and the pub was lit but plunged into darkness as soon as our car pulled up.  Coincidence, no it wasn't! So my face was set to "disapproving", but annoyingly, the pub was brilliant from the outset with it's bric-a-brac, two jolly old duffers, wheezing landlord, wood-smoke smell, not a food menu in sight.  Perfect.  And a little beer garden (well, benches in a car park!) to enjoy the first outdoor pint of the year - flippin 18 degrees by now, it'd been blizzarding in L**ds on Tuesday!!  BEEP.  We ate our sandwiches and noted the bench tribute to Bruno 2016-12, presumably the pub goldfish, who'd passed away but was still remembered.  BEEP.  Our calm was disturbed in a series of novel ways.  BEEP.  Firstly, two scruffy scroats brought FOUR dogs of various species to another outdoor table, and all decided to fight with each other intermittently.   BEEP!  Secondly, what kind of Twild wears a t-shirt bearing the slogan "Mick Parrott Plant Services" with the company phone number on the back?  One that burps coke in everyone's face and then riles the 4 dogs into a further frenzy, that's who!  BEEP.  And then a docile dog appeared and the 4 evil ones ganged up on it.  BEEP!  And all the time, a flippin pub alarm sensor which I thought was a sophisticated Starling and Dad thought was his mobile phone (by dint of him being rubbish with it) BEEPING every few seconds!!  I'll wait a bit longer for a relaxing 2017 outdoor drinking experience.  Crazy stuff. 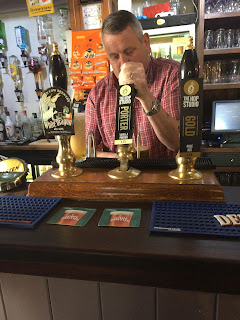 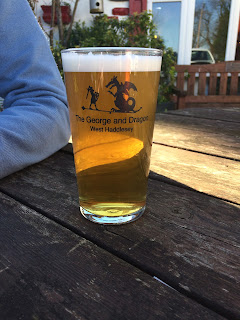 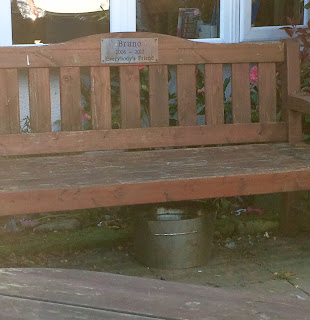 Now I'm not saying that I then told Dad what a good pub the Wheatsheaf at Burn was and that we should pop in, but had we have done, we'd have probably found a thoroughly brilliant airbase themed pub, friendly barmaid, great beer, but I'd probably still ban it from the GBG for one incident I noticed - see photo below and see if you can guess what my problem was? 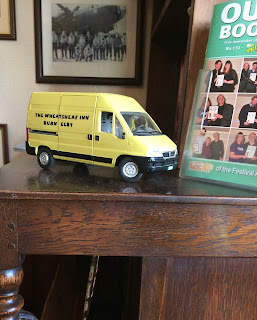 Well, no-one said North Yorkshire was going to be easy, and I'll be praying at 12 noon next Sunday then when I arrive with Mum and Dad, the Melsonby pub door is open and I can celebrate having completed another county.  I'm taking an axe and flamethrower with me just in case.

On Sunday, I was able to revisit my 2015 BRAPA pub of the year, the Boot & Shoe in Ellerton.  An absolute classic, would be in my top 100, and quite why East Yorkshire CAMRA have forsaken it in favour of the likes of Market Weighton's Carpenters Arms, Pollington's King's Head and South Dalton's Pipe & Glass, only they can tell you.  My sister's new local pub since she moved, she did well.

No midweek BRAPA this week but I'm doing plenty of "bookwork" to document every GBG pub I visited from 2001-2013 as a result of Hull City away games and other random trips as I still need a definitive total as well as the "current" GBG total.

And I'll be back in Bucks on April Fools' Day so don't wait up.