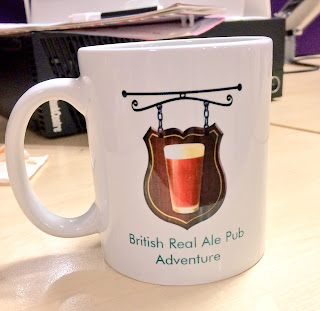 Good evening fellow ale fans, pub lovers, or people who have clicked on this by mistake,

March was a successful month with 27 new Good Beer Guide pubs visited, breaking the BRAPA record of 25 set in 2015.  The March monthly average is also 25, so my new BRAPA stats number crunchers tell me (I keep them locked in the basement away from sunlight).

The surprisingly productive month was mainly thanks to an early month binge of North Cheshire, only my second 'official' visit to the county, though with 24 ticks there, it is still my 12th most visited county as things stand.

That brings me onto another BRAPA record, I visited pubs in EIGHT different counties across the month.  One highlight was completing West Yorkshire again, the other one was getting all 5 of my outer Milton Keynes pubs done.  The standard of pub was, how shall we say it, "mixed".  I generally either loved or hated them.  But more love than hate.  Here are my three favourites:

I also discovered what a good town Southport is, how happy the folk around Milton Keynes are, and reassuringly, how depressing Leicester still is.

Last year, I set a liver-busting record of 45 pubs in the month of April and though I don't expect to reach those heights again, I will be disappointed with anything less than a pub a day.  35 if I'm being really honest.

We kick off on the 1st of the month with my second official BRAPA tour of Buckinghamshire, this time we are going much further south than MK.  I better not overdo it as the BRAPA-parents are helping me finish North Yorkshire on Sunday lunchtime.

Tuesday 4th could see the first of my non-Yorkshire Tuesday nighters, but it all depends if work let me out at 4pm.  If so, Nottinghamshire, Derbyshire or Greater Manchester are likely locations.

The following Saturday, it is NFFD (Non Football Football Day time).  After consultation with the brilliant enigma that is Thos. Irvin, it seems train strikes are a factor so we have devised a devilishly plan so simple, it'll confuse all.

A week later is Easter, and whilst I don't have any immediate Good Friday/Easter Monday BRAPA plans, I won't rule it out.  The Saturday has become 'Caturday', for the first time in BRAPA history, Ruby the Cat actually dictates when Dad can get away, and being a loyal son, I said I'd not leave him stranded in a rural York cattery at 12 noon so pubbing starts late.

I still haven't worked out where I'm going on 22nd April, the events of the previous week may have a bearing but as you know, I'm as keen to crack on with Cheshire as I am with Buckinghamshire.

It's at this point that BRAPA really hots up.  The day after, I'm in Derby for a punk gig and I still have two ticks to do, and I wouldn't mind getting out to a village or two aswell!

And after the Monday to recover, we have our first of three BRAPA holidays of the year - "Ale in Aylesbury".  Has anyone been on holiday to Aylesbury before?  Who knows, it seemed a bit grim on my last visit, but I'm spending 4 nights there picking off random Central Bucks pubs like meat off a potentially gristly carcass, but beware those midweek opening hours in dodgy little villages!

And I'm straight to Southampton from there to watch those soon to be/already relegated Tigers, by which time my liver will be pickled so I won't care.  And if I get chance to pop into Kentish Town on Sunday 30th, I might as there is a 'Neighbours' meet up in some non GBG pub and of course it is  the best TV programme ever!  Bank Holiday Monday 1st May?  Recovering with a cold compress to my head.  But hey, you've gotta live haven't you so if York's first micropub opens on that day, I'll drag myself to it in the evening!