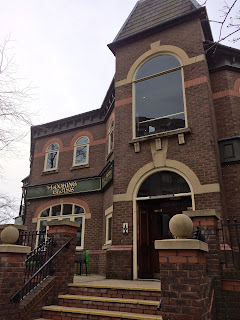 Like all good Wetherspoons clientele, I sloped out of bed at 9am, scratched my bum, yawned, and crawled past the bus station to join the old couples, shopping Mums and dusty men in hi-vis for a pint of 5% Jabberwocky and a full English breakfast.  I felt that this Wetherspoons missed a chance to be unique.  Pub pets are not something I've ever seen in the pub chain and with it presumably wanting to take on an 'Alice in Wonderland' theme, an actual Cheshire cat would've been perfect.  Would it have been grinning from ear to ear?  Well, the service was efficient if miserable.  The table a sea of sticky crumbs.  My table number had been 'stolen' so I had to 'describe' where I was sat (always fun), the beer was good, breakfast nice but a bit tepid - bacon a bit like eating a brillo pad, the old women were friendly (had I stayed any longer, I might've got a bingo invitation) and there wasn't much else to say of a grey Friday February morning in 'Spoons. 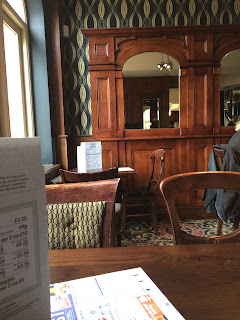 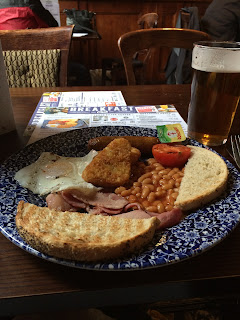 I hopped on the bus to Thelwall, somewhere I considered on my Lymm day but I decided it was a pub too far, and probably better approached from a Warrington angle.  The bus was a sociable hive of coffin dodging lunatics, who waved at anyone they saw in the street - and the bus turned down EVERY estate going to give them that opportunity.  The 80 year old gent next to me with the footwork of Bruce Forsyth wouldn't keep still, thinking he'd be better off near some lady friends at the front of the bus.  But they weren't Miss World contestants.

Thelwall looked like a nice place, and the pub was tucked out of the village round a bend behind some trees .....

One thing I'm learning in the course of BRAPA is "the longer the pub driveway, the more gastro nonsense it'll be".  Chester's at Sunderland, the Chestnut at Ayr, the Victory near Leeds, and now this, I felt like I was walking to a wedding evening function rather than going for a morning pint!  Luckily, I chose the correct door out of the thousand options (always go most wooden and battered) and after some deliberation over where the staff were, an business like European lady appeared and served me a £3.70 thing which was Oliver Cromwell themed, and Cromwellian in it's lack of fun fun fun.  Though it grew on me like a malty fungus.  Fair play to the pub, it had some surprisingly real features you might not expect from an expensive chain gastro-pub.  Like real bookcases and a real fire at the far end, the woodsmoke smell probably the highlight.  A lack of beermat and a few groups of frightful old posh ladies having tea and scones (at this time!  terrible etiquette) didn't help, but a text from my shower people to tell me they were completing, and some free Wi-fi cheered my mood.  In the bogs, I went to grab a paper towel and the whole thing collapsed on my thumb - it was red for hours afterwards and I may be suing Brunning & Price(y) if they do this to me again.  I'd been to 4 of their pubs before and am sure I always get injured going to the loos! (slipped on leaky green soap in Armoury, Shrewsbury , hit head on beam in Rowbarge, Woolhampton, collided with a twild in Old Harkers, Chester and got hit by chef coming out of kitchen too fast, Wharf in Manchester).  As one of the posh old ladies spoke of her "difficult upbringing" and declared that 'depression doesn't really exist' only to be admonished by her peers "anyone could be listening!", they were.  I hid a BRAPA card in "The Principles of Physical Geography" by F J Monkhouse.  If you find it, let me know. 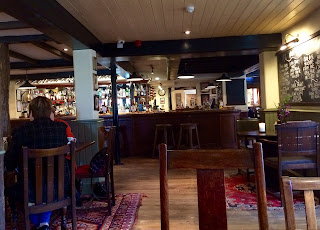 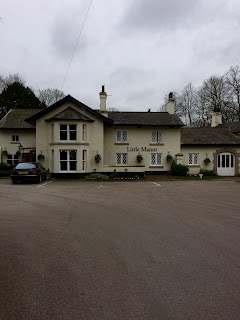 The rain was pouring down by now so the bus just had to be late didn't it?  A lively old couple crossed the road to tell me if I'd been here 3 minutes earlier, I'd have managed to get a delayed bus back into Warrington instead.  Just what I needed to hear, thanks(!)

Back in Warrington, I decided not to go out to another village (I was getting short on change anyway) so decided to seek out my third and final Warrington tick ..... 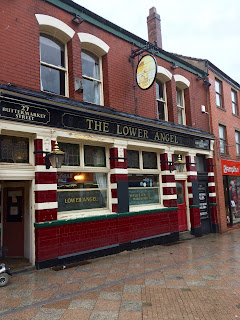 Good things come to those who wait, and my final Cheshire pub of this fruitful overnight stay proved to be the best.  I knew from the minute I walked in, smelt the dank 100 year old grime, observed two middle agers in a corner munching their sandwiches from a carrier bag, the hopelessly but wonderfully worn bench seating, and the locals telling me it'd be easier for me to look at the blackboard rather than try and peer round them at the pumpclips.  Their ulterior motive, they were all trying to get a good look at 'Geoff's' phone, seemed he was on a dating site and had got a date with this local woman who they reckoned was far too good for him!  "She hasn't seen your coconut head yet!" said the camp scouse landlord in a bid to boost Geoff's confidence(!)   Alas, I think I was the only person in the pub not shown her profile picture.  Still, it served me right as I'd broken my own BRAPA code of conduct "the locals are always right" by telling them it's much better to look at the pump clips than a blackboard - they did NOT like that.  What was I thinking?  I sounded like a know-it-all twat the second the words had left my mouth.  And I was an outsider for the rest of my stay, only a strange gargling man with long beard and half a mullet nodded at me, and that was probably his nervous twitch playing up when we were stood in the bogs drying our hands together!!  A couple of other visitors arrived to make me feel less of an outsider, they all got tasters of the 7.2% Polygraph from Shropshire which led to some terrible 'Polygraph testing' jokes, but a minus point to the pub for only selling it in HALVES.  Jeez, you automatically get a pint of Old Tom in Crewe or Stockport by simply looking the direction of the pump clip!  Anyway, a classic pub that couldn't have been less like the previous pub.  I bet I know where F J Monkhouse prefers to drink. 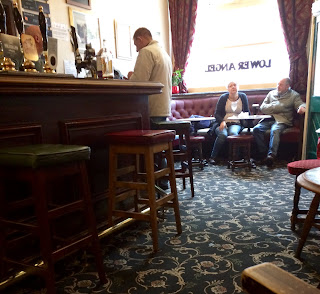 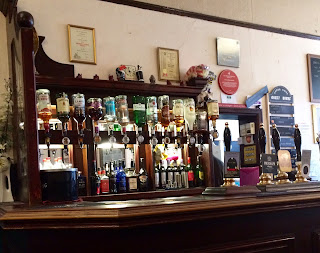 Back on the train after I bought lunch from a mad woman who gave me a recipe for this amazing stew she was making (Warrington was determined to leave an impression on me, though I think I'll need to be back for some of the surrounding villages) and although the train back to York was direct, it was (a) heaving and (b) I might arrive home too early and see the shower-men still in my flat, so I hopped off at Manchester for my final pub .... 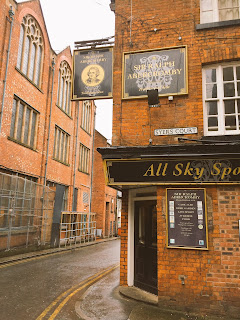 Manchester GBG ticks are pretty hit n miss, it has to be said.  One minute, you can be full of joy in a place like Angel or Marble Arch, the next you can be crying into your pint in somewhere like Pie & Ale or Rising Sun, wondering when life is going to end.  But this is everything I like about Manc pubs, central yet hidden down a quiet unassuming side street, full of dithering old locals, switched on friendly staff, and in this case, a fire which I could warm wet clothes in front of as Sky Sports News hot luminous screen singed my eyebrows just above.  Such was my happy sense of goodwill, I offered to give an old man 80p to help pay for his pint so he didn't have to go into a £20 note, though if I'm being brutally honest, the old bugger had been faffing around for so long, it was a case of me impatiently wanting to order a drink ASAP as much as anything,  He told me the poor lighting in the pub combined with his bad eyesight was the problem - he needs to go to Record Cafe in Bradford or Further North in Chapel Allerton if he's struggling to see his change in here!  These Lancastrians don't know they're bloody born!   If the rumours are true that Gary Neville wants to buy this pub, I'm sure it'll be light and airy in a year or two when it's a restaurant.  Arsehole.  The music was funky, a group of men played darts happily in a tiny back snug, and there was a weird kitchen like canteen thing in the far corner.  A bit of controversy to end as the erstwhile barman declared to a colleague that this pub's new manager has been sacked before he'd even started!  He did say why but it was too hushed for even my BRAPA ears to hear.  We can only imagine.  Maybe he's a Man City fan.


So that was fun, I'll be back tomorrow to review Saturday's trip to Leicester.  Plenty of venting needed about that city, so get ready.