Never have I felt less motivated for a day's pub ticking in BRAPA's 8.5 year history.

But a mental and physical lethargy had well and truly swept over me when I woke on Saturday 29th July, the last of my four days in Cumbria.

Had those 30K step walks on the Boot-Ravenglass day finally caught up with me?  Was I emotionally bereft due to last night's Neighbours finale?  Maybe I was in a garlic induced coma as a result of that Kiev (sorry, Kyiv) pizza, garlic bread and cheesy garlic mushrooms?

Whatever the reason, I had to physically drag myself to the railway station and aboard a train, where I hopped off out west at Brampton, a spot so remote, it isn't even that close to the town of Brampton.

It was a shorter walk than expected, only about two miles, I'd been imagining about five.  A mizzle descended, and combined with the humidity, a small cloud of flies followed me all the way as I wind my way through the quiet country lanes, barely passing a car, pedestrian or biker.  I try to swat the flies away with a big stem of bracken I'd pulled from the side of the road. 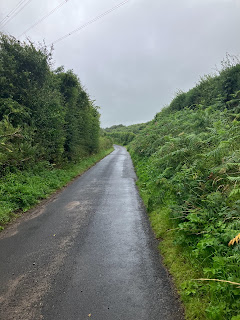 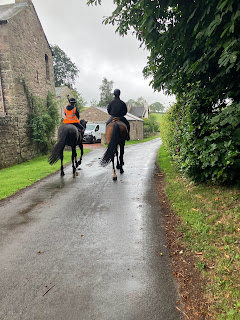 These two horse people said hi and we had a ten second chat about the weather, though not quite long enough to ask if I could hop on.  Arriving at a pub by horse remains on the BRAPA 'to do' list.

The pub came into view a few minutes later, the standout building in a tiny village. 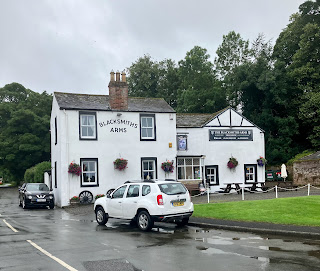 A reassuringly traditional pub with a fine red carpet, upholstered benching, wooden beams and many rooms was music to my errrm, eyes(?) as I enter the Blacksmiths Arms, Talkin (2322 / 3885) .  I'm one of the first customers, in fact I can only see one old bloke reading his newspaper and supping a pint of Hawkshead Bitter.  The bench facing the bar seems to be the hardcore drinkers area.  An army of ladies from each generation (the oldest of whom has her hair in 1950's rollers, the youngest of whom probably has the Talkin OnlyFans market sewn up, but this is wild speculation on my part).  They are limbering up, there is much military planning going on, for the onslaught of lunchtime diners.  'Not sure where all the bookings have come from today!' cries the main lady, possibly an ex sixties Carnaby Street Vivian Westwood fashionista, and I too find myself braced for the arrival of the masses.  I've got a second pint by the time this happens, joining the locals (there's four now!) in setting up a tab and shouting to the bar to get table service.  'When in Rome...' is a phrase I use a lot in this pub ticking lark, you really have to adapt your own game to the local customs.  Doddering elderly folk who haven't pre-booked are arriving now, putting extra pressure on these poor ladies, but the pub is large, and everyone gets a feed.  Time I pushed off, I've more than outstayed my welcome, mainly because the trains to Carlisle are so infrequent.  But an enjoyable pub to be in.

The mizzle has turned a full on yillen by the time I reached Brampton station again, and I was glad that someone had built a shelter so I could eat my snacks and patiently wait for the train. 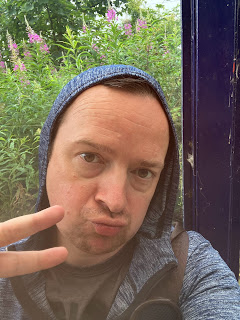 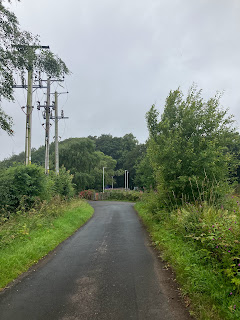 Back in Carlisle, I now walk to the bus station to get a bus in the direction of ... Brampton!  Felt a bit backward, but trust me on this one.
I miss a bus by seconds so have another painstaking wait.  It is mid afternoon by now, I'd normally be frustrated to be only one tick in but that lethargy still hovers over me like a ghostly kestrel, or something awesome.  Look, I'm not a poet, sorry.
It is the opening day of the football season and back in Hull, we are 0-1 down at home to Bristol City,  Daddy BRAPA reports from the back of the east stand.
Just as I had on day one, I hop off the bus at Little Corby, where I'm hoping it is second time lucky for this pub with stingy opening hours ..... and it is. 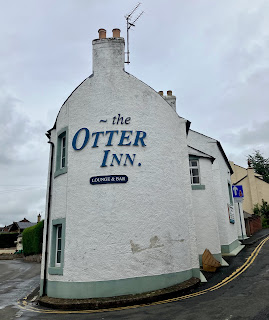 "Otter, what's one of them? shouts Col from my bag .... oooh what a snidey bitch that cauli can be!  Welcome to the Otter Inn, Little Corby (2323 / 3886) and an impressive guv'nor, imagine an imposing Derek Acorah grounded in reality and very much alive, serves me a cracking Corby Blonde, one of the best pints I'd had all week.  Like all good guv'nors, he spies my GBG from a distance and comes over for a chat - which includes a reference to their limited opening hours making life difficult for tickers.  He admits this place is a hobby pub, without using that exact term.  As my final pub tick of the holiday, it sums up Cumbrian pubs quite perfectly.  The decor and furnishings have been blanded out into something resembling a grey cafeteria / bad art gallery but the clientele, warmth of people, and the multi generational feel from kids to oldies, compensate to give the pub a very centred, authentic atmosphere.  Wholesome, against the odds.  This is Cumbria ticking all over. Ample opportunity to stand on my second dog of the holiday after yesterday's Wetheral incident, as I run the gauntlet to the gents, but all that happens is an old bloke says he's glad he brought his handwipes.  His friend comments that anyone who lives anywhere else in the UK is jealous of Cumbrian rain, the only place that has been bucking the trend of this droughty summer, as I found out earlier to my cost.  As I peer into the distance, a partially hidden Sky TV screen is reporting we've equalised thanks to a Vegan Tofu penalty.  1-1.  Woop!  Time to catch the bus back to Carlisle. 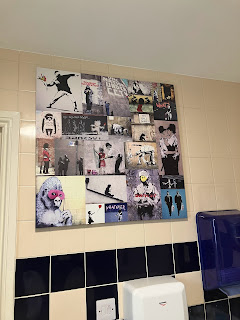 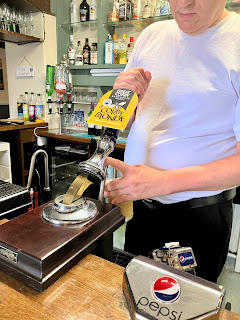 To my shock, as the bus trundles into Carlisle, I notice we have won in the 93rd minute thanks to Jean Michael Celery.
Daddy BRAPA sounds like he's almost unwilling to take the win. 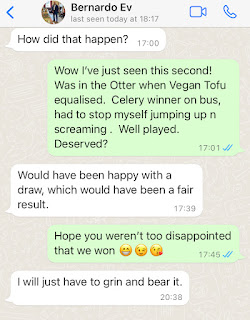 Oh yes, the bus is trundling into town more than a chubby ex Swansea City striker called Lee who sounded like Orville the Duck.
The reason is, we are passing Brunton Park picking up a load of miserable old men heading back into town.  I check the score and am surprised to see Carlisle have won 1-0.
"Who did they play?" shouts the crazy old lady at the back.  "Crawley" someone tells her.  "You know why Crawley lost ....." she slurs, ".... they just didn't crawl enough!"  She lets out a wheezy cackle.  No one joins in.
I've missed my connecting bus to Curthwaite and quite frankly, I don't care.  I should really get a train to Maryport/Workington and try and get my Crosby and Seaton ticks but I just can't be arsed.  This isn't like me!
Instead, I'll keep it local.  As John Virgo once said in the snooker, "if you don't play the balls, they'll never forgive you".  And I think pub ticking might be similar "if you don't play the pubs, fate will work against you".
I visit two craft bars which that nice Carlisle man on Twitter had recommended as some of the better beer places. 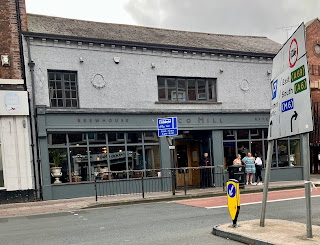 I'll review them both together as they were pretty much the same thing.  Coco Mill and the Last Zebra were both cask free from what I can see, so probably not very pre-emptive, but then again Indie Craft in Kendal had no cask on my pre-emptive visit and that then made the GBG.  So ya never know.
Both bars had a wide range of crazy keggy stuff, and the £7.10 I paid for a very average 3.8% hazy pale in Coco Mill was extortionate and made me quite upset!  Last Zebra was £5.75 for a much more flavoursome 6%er, and it represented good value in comparison.
Coco Mill was the slightly weaker place for me, duller surroundings, didn't feel entirely clean, staff a bit peculiar / overworked, a bouncer had to let me in once he knew there was enough space, and I had to play musical chairs because I kept sitting at reserved tables .... problem was, there was no indication they were reserved at all, never mind at what time!  The bloke who kept chasing me about probably saw me as a nuisance, but I was just trying to use my initiative.  Why should drinkers be second class citizens?
It was a similar story at the the Zebra, but it was a brighter, younger crowd with happier staff and I felt comfier here.  Whether the zebra skin on the wall was real, I'm not sure.  The seating arrangement / staff engagement was even more muddled than in the Coco Mill.  I was told to 'sit down' and they'd take my order.  This took ages, and when I question it, I was told there'd been a misunderstanding because they thought 'I was already here!'  A man soon strides over and I'm told "your table expires in 15 minutes" which I think meant it was reserved for diners, but how would I have known?  This time though, I am instructed to sit at the bar, where a rowdy old man had been told off for chanting a Carlisle song (I'd spied him doing the 'Monster Mash' on the way in, totally incongruous in the surroundings so I had to laugh, as did everyone around me).  His embarrassed wife who looked like an elderly Yazz was trying to eat Spag Bol in trying circumstances so I gave her as much elbow room as I possibly could, whilst admiring the staff mullets, more tributes to the likes of Henry Ramsay and Scott Robinson II?  Neighbours is massive innit?
Conclusion - I think the craft scene is a bit much for BRAPA .... but it was an amusing and instructive little finale to my ticking mini-break.


And there we had it, back in my hotel, with my new found taste for craft beer, I had the final can which I didn't manage the previous night, with some nice food, and had a nice early night! 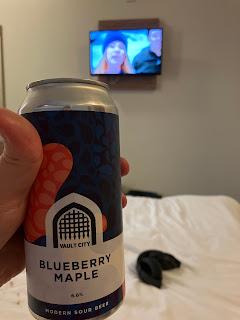 After all, I needed rest as it was only a few days until my 19th trip to Blackpool punk festival.  Ticks in between the bands?  You'd better believe it!  Join me tomorrow for the first of a two-parter.
Thanks for reading, Si