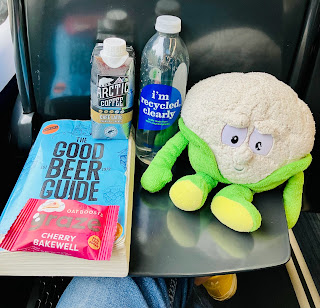 Colin returned from his long post-Cornwall layoff for a rare Thirsty Thursday appearance.  He needs an eye operation for cauli cataracts, but that would happen soon.

After two ridiculously hot days (36 and 39 degrees in York), we finally had a cooling down period, as I headed back over to Lancashire where Preston train station really is becoming a home from home, and I don't know how I feel about that.  Even the pigeons are starting to recognise me.

Team Blackpool?  Team Preston?  Team Blackburn?  It really depends which Twitter pub person I'm talking to.  It's never Team Burnley though.  I shouldn't that before tomorrow.

One of my most awkward remaining ticks was in Bispham Green.  Nowhere near Bispham.  South of Preston, close to Croston on an awkward bus route that runs every two hours.  The pub closes mid afternoon for added GBG japes.  Ticking, it'll be the death of me. 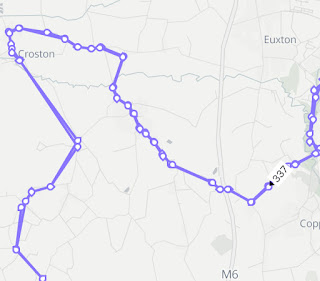 I was quite shocked to see the bus arrive.  I was the only passenger, the bus resembled one of those care in the community chuggy little 1970's contraptions, which struggles up hills and emits an awful lot of fumes from its back passage.

Still, it got me there, and you can't ask any more from a bus. 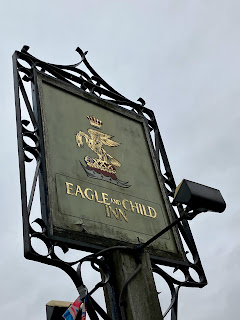 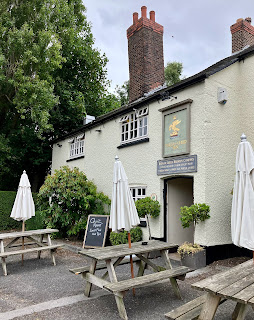 The first question I'm asked on entering the Eagle & Child, Bispham Green (2296 / 3859) is 'will sir be eating with us this lunchtime?' but there is no 'r' in Si, and in any case, they weren't really that posh.  For an award winning food pub, I was delighted to see that the core of an old village boozer was still in tact.  It was dimly lit, there were carpets, crooked beams galore, a low ceiling, distinct drinking areas, and today at least, it wasn't too hard to find a tucked away alcove to take my pint of Speed Wobble, a song by Cerebral Ballzy, to.  A more intimate Brunning & Price would be a fair description.  At the bar, a bloke appears from the cellar triumphantly brandishing an ice cube on the end of a pair of scissors. "Done it!" he exclaims to the lady serving me.  She looks at him like 'my hero'.  What he'd done was unclear, but a blockage caused by an ice cube considering the recent climate seemed improbable.  Staff members occasionally pop their heads around the corner and give me a reassuring smile, as if they cannot fathom someone being sat here on a weekday lunchtime simply drinking beer.  A trip to the loo reveals a surprisingly expansive raised garden, including a part time bowling green, backing out onto a field.  The grass is scorched from the summer heat.  It is out here I sit for pint two (a Lister's Summertime, and both ales was in good nick here).  With the bus timings, I had time to kill.  I'm hungry now, and being outside gives me chance to smuggle the two Pepperami sticks I'd purchased earlier.  Shrunk by a good few inches since BRAPA began ..... and Pepperami sticks have become shorter too. 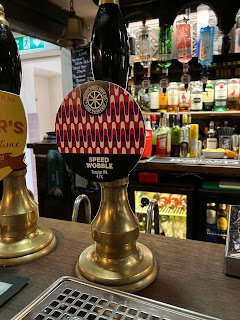 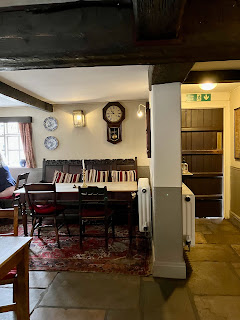 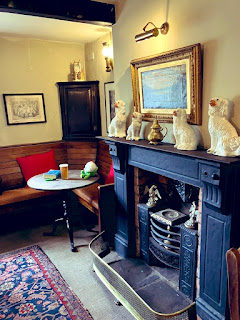 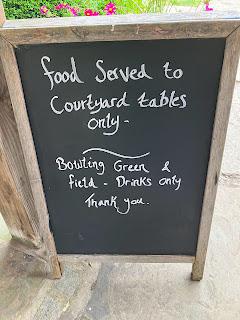 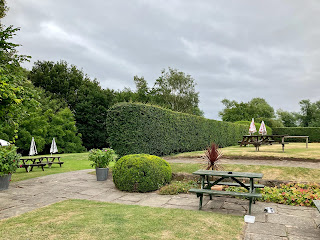 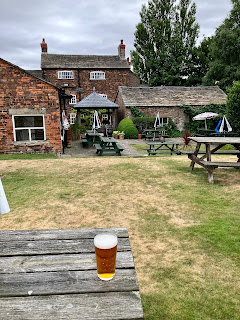 Bus and train behave themselves, and soon I am back in Preston where I message local pub hero Matthew 'SeetheLizards' Lawrenson to see if he wanted to come out to play.  He did.  I think this was our fifth trip involving the Preston area.  Will it ever end?  I believe he has more 2022 BRAPA appearances than anyone apart from myself and Daddy BRAPA.
I'd been planning the forthcoming Rebellion Punk Festival at Blackpool in a fortnight, and knowing I had delights such as Wrea Green, Knott End on Sea, Longridge and Grimsargh to consider, I didn't want the additional pressures of Lytham and St Annes.  Otherwise I'd end up barely watching any bands!  Best to get these two chalked off today, as they were on the same route as another I require at Freckleton.
We took the bus to our furthest point, which was St Annes.  I should've had two ticks here but No. 10 Ale House has shut down, which made life easier.
As we walk towards the pub, we encountered a fork in the road..... 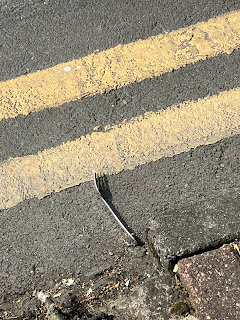 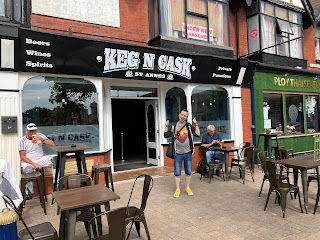 Keg 'n' Cask, St Annes (2297 / 3860) won't live long in the memory, being an unremarkable grey and sea blue colour schemed micro with high seating , probably more reminiscent of the underwhelming ones around Preston rather than the more positive experiences I have had in the Blackpool area.  To its credit, the man at the helm seemed a good guy, and I got the impression that had the situation arisen, I could've got chatting to him.  I KNEW I should've brought Pedro today, because a fine Titanic Plum Porter at £3.20 was one of 7 (SEVEN) beers on the bar.  The other six, I'd never tried, but when it comes to TPP,  I cave in almost as readily as I do for ESB.  Or Green Devil.  Or Spingo Special. Colin needs a signature beer.  Has anyone brewed a cauliflower infused craft ale yet?  Cauli Wobble?  Surely they have.  Matthew teaches me about George Formby Snr over the loud piped music, and in a moment of confusion reminiscent of 'the phantom ticker of Sidcup' (for those of you who remember that far back), Matthew inadvertently highlights the 'Wrea Green' section of my GBG map!  What drama, and how is Blackpool Jane going to react when we do that tick together in two weeks?  (Short answer, she won't because even I won't be bringing my GBG to a punk festival weekend). 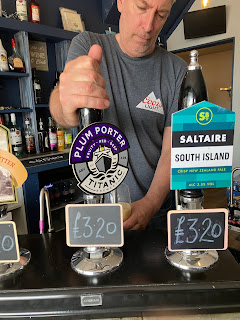 I'm not feeling too optimistic about making the next bus to Lytham, but as we round the corner, I see a little local one just about to depart.  'Quick run!' I instruct Matthew, and he must hate me, always making him run for buses.  I'm still not convinced he's recovered from the day he nearly died of consumption in Bamber Bridge.  No one should die in Bamber Bridge.
We make it just, I think the driver saw us and waited.  Even if my day ticket isn't valid, and we get off a stop too early by mistake, it was still worth it.
A livelier crowd outside this one, making the outdoor photo quite awkward, verging on cringeworthy. 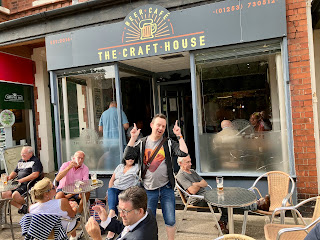 Especially as dark haired moody lady under my right arm makes a snide comment as we enter, a shame as her pink shirted man friend was loving it.  Welcome to Craft House Beer Cafe, Lytham (2298 / 3861) and once inside, there is a single file queue snaking back to the entrance.  The bloke in front of me is about seven feet tall, so no idea what beers are on, until Matthew eventually spies a blackboard to our right.  Our overworked host Chris has the additional stress of me saying "are you called Chris?" as I order a pleasant Pheasant Plucker, Matthew gets on t'lout.  Chris confirms he is indeed a Chris.  I tell him that Blackpool Jane has said to say hi.  We agree she's a good egg, but I cannot linger, because the stream of customers isn't abating and the sweat on Chris's overworked furrowed brow suggests a man who wants me to toddle off pronto.  We sit outside, despite our 'persona non grata' reputation from those who know us as the 'photo duo'.  "Get a good piccie earlier?" squawks a different lady eventually, and I'm starting to suspect everyone in Lytham is wanted by the police.  She's really nice actually, Lytham Jayne they call her, a local CAMRA lady who loves the idea of BRAPA so much, I let her do the highlighting.  I've never seen such a confident debutant highlighter.  I tell her as much, and she replies it is because she is a teacher.  She confirms Wrea Green is pronounced 'Ray' as Matthew still had doubts, then we follow each other on Twitter, her account is set to private so that's why she didn't pop up, but our bus is very close so we have to dash.

One pub left to go, 'twixt Lytham and Preston, a 4pm opener in a place I'd never heard of until this year called Freckleton.  Let's go in and I'll tell you what to think about the pub. 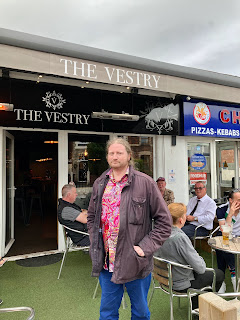 Another 'hard to be conspicuous when you want an outdoor photo with your Paisley shirted mate and a Cauliflower waving from the bag' opening salvo at Vestry Tap Room, Freckleton (2299 / 3862), but the post-work lads out here seemed a bit more game for a laugh than their Lytham counterparts, even if they do eye the lens with some suspicion.  Had Jeremy Beadle's ghost popped up, it'd have been even more memorable.  Expectations for this pub were particularly low, having visited their sister pub in Tarleton a couple of months back, perhaps the dullest of all the dull outer Preston micros.  But this place outshone its sister, despite having obvious similarities in terms of a drab identikit interior.  The mood lighting, locals with a 'League of Gentleman' attitude, and a fabulous bubbly pink haired landlady set the tone.  She loves Matthew's shirt, and she'd either go really well with it, or clash terribly, I just couldn't work it out.  The ale is stunning murk, 'He's Not the Messiah' and I can't believe she laughs when I say 'he's a very naughty boy' because EVERYONE must say that after ordering this, and really, if this was an episode of QI, klaxons and alarms would be flashing in my direction. 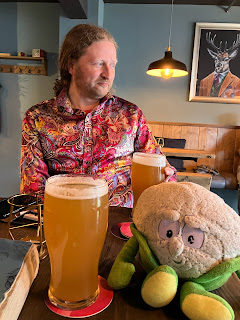 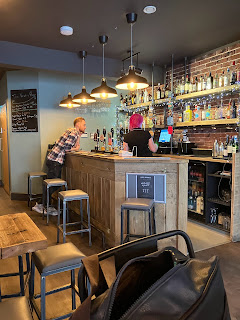 Back in Preggy Preggy, there is time for a second trip of the year to the always good value Old Vic before my train home. 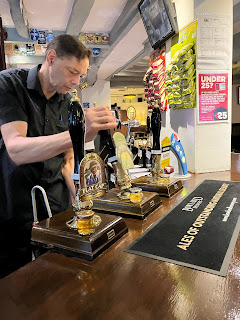 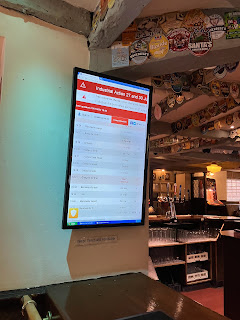 Four more ticks complete in my quest to get a fully green Lancs before the new GBG arrives in (hopefully) mid October.  Ten to go, they are getting a bit strung out now (Silverdale and Longridge in particular are peeing me off) but I'm getting somewhere close.
See you Wednesday for news of another foray into north Kent.
Si