BRAPA in ..... DARWEN'S BEERY OF BRAPTUAL SELECTION (& AN OTTER FAREWELL)

Here are the five steps of Darwin's guide to pub ticking for any scholar's out there:

Variation - a nice mixture of pubs. Heritage, micros, 'Spoons, dining monstrosities.  They help keep the blogging fresh and stop me from taking the really good ones for granted.

Inheritance - that'd be lovely!  And lots of it.  To help with those tricky taxi trips to Uist in later life.  But no rush Daddy & Mummy BRAPA, you are both very young for your ages.

Selection - Having to trust the local CAMRA members re what pubs end up in the GBG.  I think 90% of the time, they get it right.

Time - Always the hardest thing to control, time just flies on BRAPA days, what with buses, trains, long walks, even if you are keeping it to 25-30 mins per pub, time along with bladder is the thing I wish I could stem the tide of.

Adaptation - Biggest skill I've learned, I was proper stuck in my ways pre-2014 but BRAPA has taught me that for all the planning in the world, stuff can and probably will go wrong, so if you have to adapt your route during the day, then always have a back up plan / 'reserve' pub options.

I was (just about) recovered from Cornwall as I set off to my bread 'n butter Lancs for a rare 'Fursty Friday' tickathon.

I'd barely slept due to messed up sleeping patterns that always seem to happen when you are off work for a long spell, so I lurched around Blackburn bus station and an indoor shopping centre in zombie fashion.  I received plenty of reassuring 'you are one of us now' nods from the assembled locals.

A gentle bus ride took me to the village of Wheelton for pub one, open well before noon.

Red Lion, Wheelton (2281 / 3844) had one of those early morning 'we are very much open, but we are in a state of flux' atmosphere's going on.  Henry Hoover grinning up at me from the floor, a yellow 'don't slip on your arse' wet floor sign, and a lady who had to break off from mopping, hoovering and sweeping to serve customers.  Mugs of tea, mobile phones and sets of keys strewn across the pub, more doors open than you'd normally see.  Two lads were already supping pints, unaffected by the upheaval.  I was amazed to see so many ales on, about eight I think.  A real 'greatest hits' of some of my favourite ales.  Seemed like too many to maintain good quality, but I was wrong.  In what would be a month of often poor beer, this Hawkshead Gold was in absolute prime condition, and if you don't trust my taste buds alone, look at those lacings!   And once I'm sat down, pint in hand, it is a companionable place to be, homely, the cleaning only adding an authenticity to the place rather than detracting in any way. 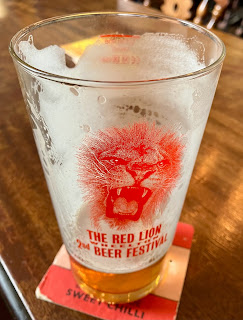 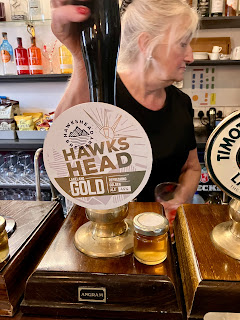 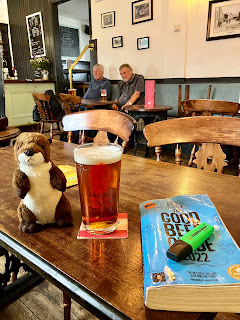 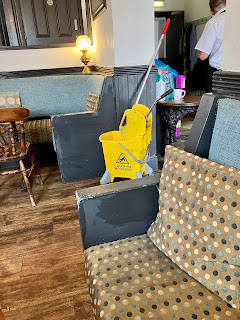 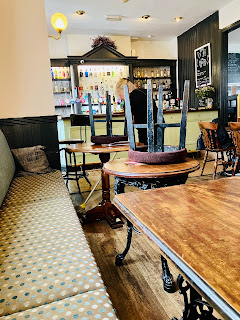 I reached Darwen by late lunchtime / early afternoon.  Two ticks here.  Both sounded alarmingly 21st century.  The sun was out and being a Friday, there was a buzz in the air as I walked down the main street, like folk had already started their weekends. 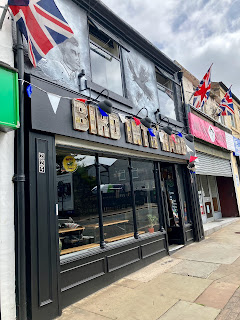 With beer shop based beginnings, I was surprised to see parallels between Bird in th' Hand, Darwen (2282 / 3845) and my previous Red Lion - an open front door, and a lot of 'activity' though here it wasn't so much cleaning, but general maintenance.  I'm surprised how much depth the place has, and as I peer through into the recesses, two young lads are lounging around strumming acoustic guitars.  This is all too much for our genial owner, who seems a practical kinda guy, and he soon summons the not too dynamic duo, enlisting them in some beer barrel moving.  Looks like heavy work, so I bury my face in my GBG and get busy with the Stabilo in case the same fate befalls me.  If I stare at Wiltshire long enough with a pained expression, hopefully I'll become invisible.  From what I can gather from overheard snippets,  the lads are European (Austrian?  Swiss?) , owner knows their Mum, seems to be some kinda part exchange / summer arrangement.  I'd love to think there's two Darwen lads learning to yodel in the Alps as we speak, but with mouths full of Toblerone and Emmental.  Despite my love of Black Edge brews (and any beer costing £3.30), I'm not getting on with this rum porter.  Kept well, but the rummy tang was too much. 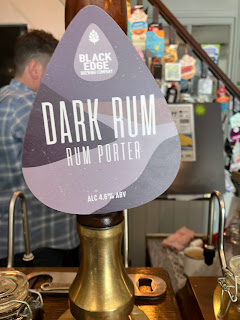 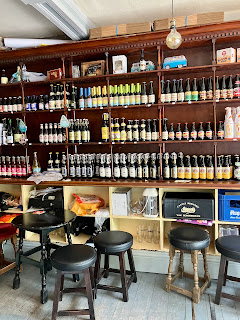 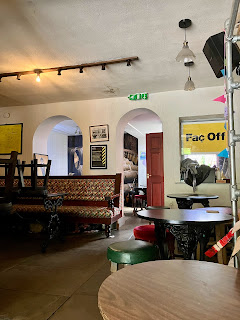 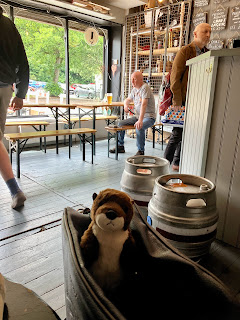 A few yards down the street, I came to my second Darwen tick ...... 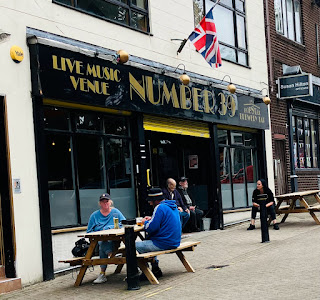 For the first time today, I felt like I was actually 'in in' a pub rather than just 'in', if you know what I mean.  A bit like when the kids say "are we going out tonight .... or are we going OUT out?" meaning full on club / restaurant / 6am finish, rather than nipping to the local, back home for 11pm. Number 39 Hopstar Brewery Tap, Darwen (2283 / 3846) was the rather unappealing name, but this place did feel more like a boozer, partly due to a decent gaggle of old boys n' girls already on their way to weekend oblivion.  The chap opposite hoarding loo rolls like it was March 2020 only heightened my fascination of Darwen, I don't think I've seen so many loo rolls in random places in one town.  Good to be prepared I guess? BRAPA knows about toilet mishaps more than most.  Could be kitchen roll actually.  Rougher on the bum.  The beer was a funny one - the quality was obviously there, more top lacings, but again I just couldn't enjoy the flavour.  At least I had an otter to help me out. 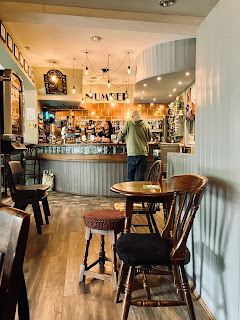 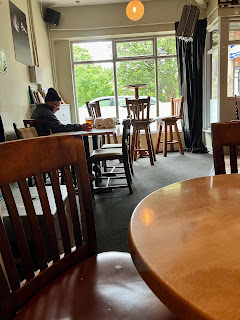 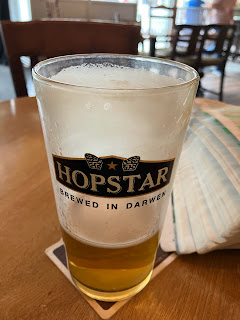 Bromley Cross had become isolated as my one remaining Greater Manchester GBG tick in that northerly area.  So imagine my delight, when I notice at the 11th hour, that it is on the same train route as Darwen, only a few stops away.

Of course, a BRAPA day wouldn't be complete without some transport misery so when an announcement came through saying "the train has been delayed due to a disruptive passenger at Blackburn" (probably the lovely Ian Sutton trying to slow me down!) everyone on the platform let out a collective groan. Luckily, the kind bald man you see above had a friend on the same train, and kept giving me updates re train departure time.  Sadly, I couldn't garner any info about the disruptive passenger or his antics. A BRAPA crapper, as we call them in the trade.

Train finally turns up, looking in tact.  A few sobbing passengers, but you tend to get that in East Lancs.

A decent stride down from station to pub, trying not to trip over the dawdling high school kids too busy munching on E numbers and swigging Red Bull to have any spatial awareness.

Finally I came to quite ugly Swedish bathhouse of a building, impossible to photograph and here we were ...... 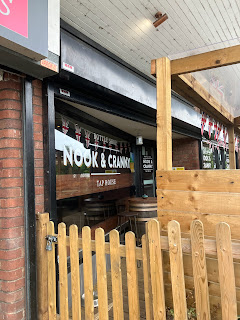 I was interested to see what the Nook & Cranny, Bromley Cross (2284 / 3847) would hold for me.  Comments from fellow pubbers have ranged from "what a cracker, one of the best micros ever!" to "found it quite dull and drab to be honest".  The bearded ginger lad in charge greets me warmly, a people person and most impressive staff member today.  Although my initial impressions were of a pretty standard micro, the longer I stayed here, the more I could sense a warmth, love and care that you get from micros run by the right sort of people.  The green tiled bar and floral gents wallpaper can only tell you so much! I was talking to BlackpoolJane about this on Sunday on our Blackpool pre-emptive walkaround, some micropubs have it, some don't. And this place did.  I'd opted for a Beartown Honey Beer and I'm not sure why, not a huge fan of honey beers, I seemed to be making questionable beer choices all day! 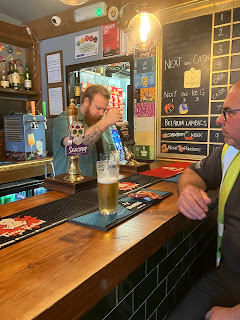 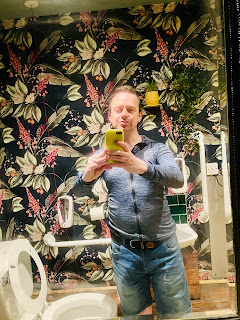 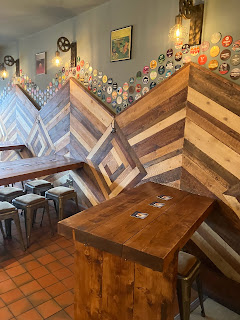 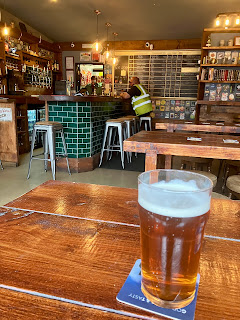 Struggling to keep my eyes open by the time I reached Blackburn again, I found this quality coffee place and got myself a bit of crumble even though it is probably not strictly Keto.

Greening that final pub on the left side of Greater Manchester was a satisfying moment. Only 13 left there now, and Lancs was down to 16 at this stage.  So all going well.  It was goodnight from Ghost Sonya, and goodnight from me, and we got to do it all again tomorrow with Daddy BRAPA in the Rochdale area. 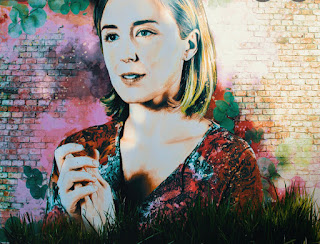 See you on Thursday night for that one.