BRAPA incompetence denied me a first pub tick of August on my second day at Blackpool's Rebellion Punk Festival.

I thought I was being very clever too, taking the tram all the way from St Chad's Road to Fleetwood Ferry, an arduous 50 minute ride.

But despite a note I'd made in my very own notepad reading "Care - check ferry times on Facebook page", it'd had gone clean out of my mind (too much punk making me brain dead?) and I'd failed to notice that the next ferry wasn't until 2:15pm. 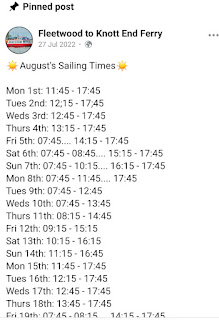 Could I have caught a bus?  Perhaps.  But at this moment in time, I just wanted to get back to the festival and watch some bands.  The tram driver was quite a character. He asks me when Toyah is playing, so I pass him my programme.  And I can see the cogs whirring as he calculates how long he can delay his tram along the seafront around 3pm so he can hear a bit of her set!

To add insult to injury, one of the worst beers I've tasted all year comes next.  I have it at the GBG listed 1887 Brewroom, which I visited pre-emptively in 2018.  No fault of the pub this ale, but this baby themed 'double rusk & oat milk IPA' sounded intriguing, a must try!  However, I found it as undrinkable as it looks.  I think the kids call it 'dank'.  Like Treguard's dungeon.  A knightmare to drink! It didn't help that there were no seats available, I hit my head on the 'poo room' sign, and the barman skipped over serving me in a moment of sheer staff ineptitude. 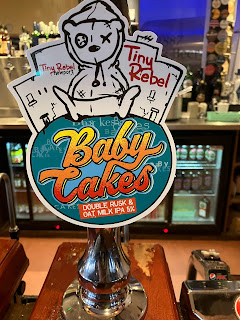 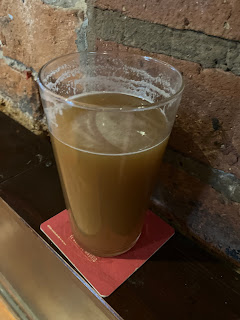 Thankfully, Toyah did what Toyah does and brightened the day - and no, I didn't see any rogue tram drivers breaking in. 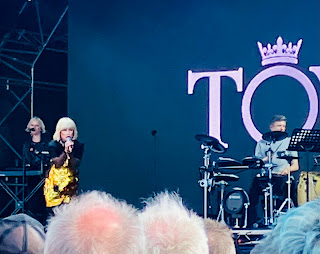 As she almost once sang, 'it's a mystery how the Plough, Grimsargh (2324 / 3887) has made it into the Good Beer Guide' but it has, as I found it to my cost 24 hours later, when I met Daddy BRAPA and took an impromptu mid-festival bus trip up there. 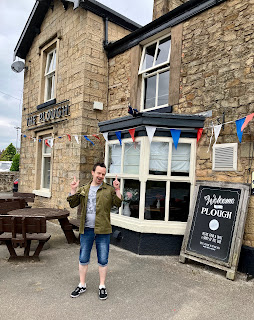 After all, Hull City were away to Preston North End this weekend.  It'd be rude not to go to the match wouldn't it?  But what a dreadful, dreadful pub.  If you are kid, you'd probably love it.  The beer garden was basically a mini race track.  Looked massive fun. 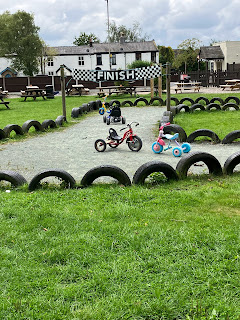 The staff were pleasant enough, but the Plough was dining boredom (but with zero customers), it felt dirty, the swarm of flies around our heads forced us outside, where a wasp then attacked us!  And the beer was even more unforgiveable than the Baby Cakes in that there is no way it should've tasted as sour as a Duchesse Boing Boing.  I tried to convince myself otherwise, but Bank Top rarely do ales like that at 3.6%, and no one Untappd was describing it as anything other than a standard bitter. 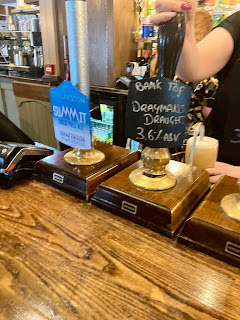 The game was equally dull, and as tends to happen with PNE this season, and finished 0-0.  I melted in the first half, moved to sit next to Daddy BRAPA in the second, but we mentally didn't emerge from the dressing room and were hanging on for the point against distinctively average, flag waving opposition. 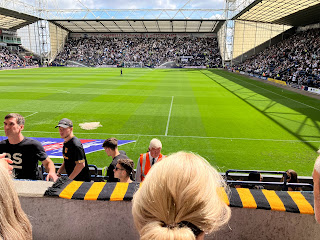 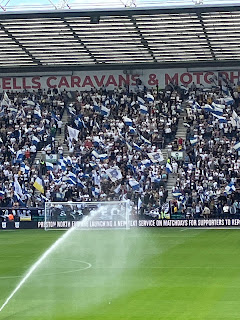 My legs had gone and all the energy was sapped out of me by the time Cockney Rejects finished a few hours later, a band I usually real get into what with his cheeky chappy West Ham Scrappy Doo ex-hooligan persona, but I just wasn't 'feeling it' and couldn't stand up long enough to hang around for Cocksparrer, a band I like even more, especially since I've started listening to their 2017 album. 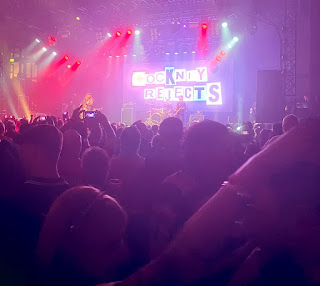 Only one thing for it, head back south towards my Travelodge and tick off a couple of pre-emptives in the vicinty.

The first was a real duffer called the Bloomfield Brewhouse, five handpumps turned around and just this ultra meaty thing from a place called Ansdell 47 was on.  It was scary Saturday night karaoke fun, some of the singers were quite good actually but I hid behind a pool table, where shock horror I dropped my pen and couldn't find it despite ages scrabbling around on the floor amongst crisp and scratching crumbs!

A punk lady did end up lending me her eyebrow pencil so I could keep up with my punk rock alphabet challenge, which is more punk than using a Bic biro if you think about it. 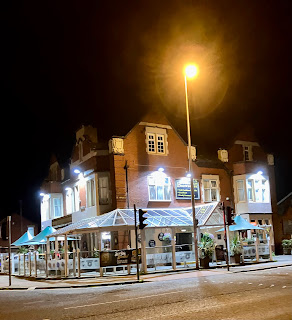 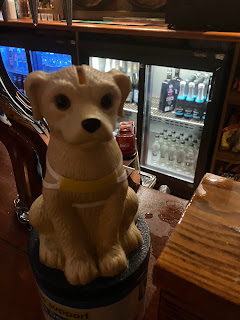 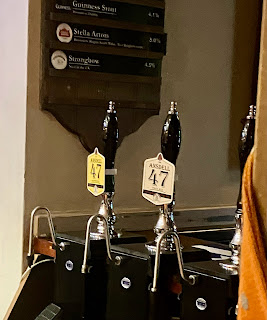 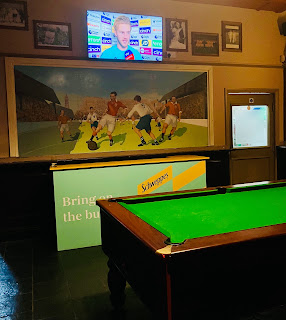 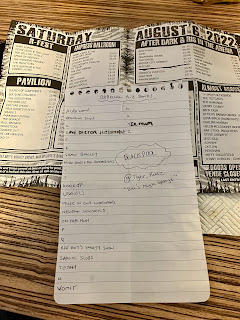 I'd end up ticking 18/24 letters of the alphabet by the final night, it could've easily been 21 with a bit more discipline.  Gives me something to strive for next year, if  there IS a next year!  Not decided yet whether I'll come back in '23.

Back to the Saturday evening and Shickers was a much more impressive pre-emptive.  Lovely old guy, and three gents and this huge dog which must've been half husky or something all chatting in companionable splendour, often throwing me a smile as if to say "feel free to join in our wonderful chatter" but my lack of energy meant I simply wasn't in the mood for talking so just nodded along as they discussed Chloe Kelly, euthanasia and Americanisms.    Not all at the same time.

If this place doesn't make the 2023 GBG, expect to see it in 2024 if it still exists by then (just been watching the BBC news about every pub closing down because of the energy crisis, which'll sure make ticking easier!) 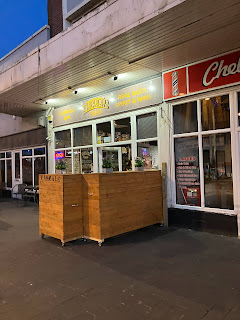 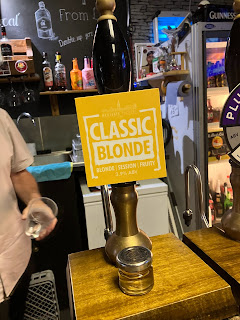 I'd have an even better Shickers experience the following day which I'll talk about at some point in the future but this was a nice gentle introduction to the place.

Sunday was the final day of the festival, but it began with a pub tour courtesy of Blackpool legend and all round good egg Jane 'BlackpoolJane' Stuart.  As far as I'm concerned, she's as synonymous with the town as the Tower, Jimmy Armfield, Pete and Sophie off Gogglebox, and fifteen year olds with burning prams asking you to pop into the offie for a bottle of Voddie but I'd hate to casually lazily stereotype so I definitely won't be doing that.

Pub tick number two was incoming, but where was Jane?  Not on my bus.  I peered out from the top deck at each stop like an eager beagle looking for its owner, but the only passengers getting on were a steady stream of pink haired ladies called Vera.

Wrea 'Ray' Green was the destination, a 'PR' postcode Jane had messaged me with some trepidation, as if worried her skin might blister and burn.  But it looked innocent enough, and very green (the place, not her skin), complimenting my jacket almost as perfectly as a Stablio. 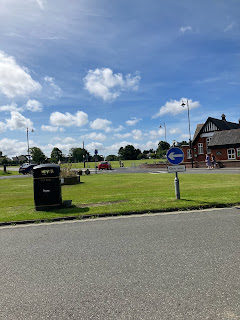 Finally, I check my messages and Jane tells me they opened early and she's walked straight in and has drink.  In a GBG club?  Unprecedented times. 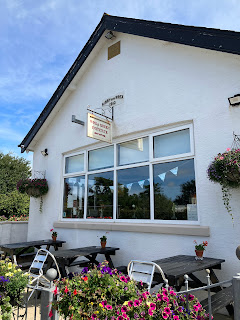 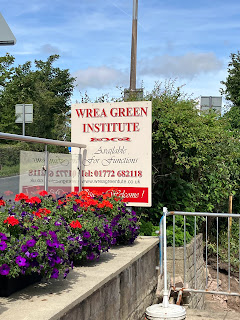 And sure enough, Jane is sat there is Wrea Green Institute, Wrea Green (2325 / 3888) looking chill as a cucumber.  I'm asked to sign a guest book, an inconvenience Jane didn't have.  I knew this jacket made me look dangerous.  Two Marston's are on, so I grab a 61 Deep and am forced to apologise for selling Keane Lewis Otter down the river before we can exchange pleasantries.  My improvised Josh Bowler/Moler analogy was a thing of beauty which didn't get the credit it deserved.  As GBG clubs go, this is certainly one of the drabber I've witnessed, and I was glad of Jane's company because it would've been hard to find anything to say about it.  Just too modern and airy to have a Dartford or Urmston or even Birchanger level of atmosphere that you could really sink your teeth into.  Still, a tick we'd been talking about since New Year's Day when we first met in Cleveley's Shipwrecked, and although being mid punk festival, there was no GBG or Stablio or Cauliflower, mentally highlighting it felt so good! 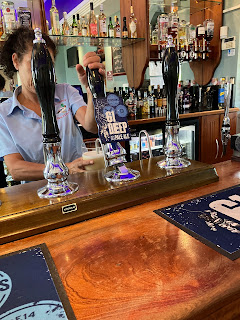 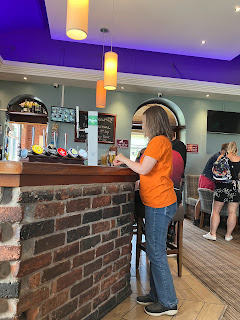 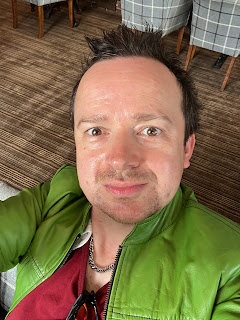 Time to take the bus back into Blackpool for a bit more pre-emptive ticking.  Jane has already blogged brilliantly about it so I don't have to (I will of course, but not until I'm a bit more caught up with August - it is now doing my head in being a month behind on blogging!) but we did Thirsty? , Cask & Tap, Waterloo and went back to Shickers before I finally got some late punk bands in.

Tomorrow, I'll be back for the month end review.  Then, I'm going to blitz August in three succinct blogs (that'll be a first!), then we'll see where we are re Blackpool.   But now, time to load up the iFollow and see what we do at QPR.