Halfway through my my penultimate day in North Hants, the first time I'd ever been to this wonderful county with the sole purpose of ticking off pubs in the Good Beer Guide, and the constant mix of traumatic moments and fun ones was keeping me on my toes.

I'd planned my whole day around this next pub, with its awkward 4pm opening time, I had to time my departure from the Eight Bells in Alton just right for the twenty minute walk north of the town.

As I approached, much relief to see it open.  Coolio! 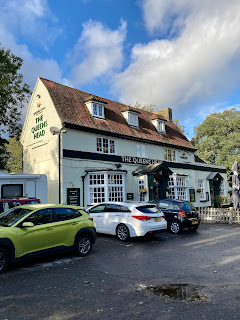 After jumping in the above puddle in delight, I was pleased to find the Queen's Head, Holybourne (1885 / 3102) was one of those classic 'owned rather than managed' traditional GK efforts.  I was greeted by the ultra friendly Mrs QH who gave me the good ole' Covid Chapter & Verse, a bit of Colin love, and some general Cilla style 'what do you do and where d'ya come from chuck?' chat, before presenting me with an ale from the Isle of Wight which really hit home to me what a filthy southerner I was becoming.  It was absolutely top quality, Goddard's, and Mr QH, fresh from bollocking what may've been his teenage son for a maskless pub entrance, tells me he takes great pride in keeping his ales well.  As the boy sits in the far room with an old dude who may or may not have been his grandad, Mr QH who was a smashing guy to chat to admits he'd prefer cask marque accreditation than GBG entry.  Personally, I've seen so many Cask Marque pubs not keeping good beer, I couldn't agree, but he explains it is more scientific, alluding to a bad experience when a drunken group of Guildford CAMRA's came in, one ordering a bottle of Newcy Brown Ale, and then marking the pub down!  Mr QH had to appeal the decision.  Oh dear.  But I was less convinced by his argument when he tells me this Cask Marque guy of clean palette' does it all on public transport, so unlikely he'd get to your Long Sutton and Lower Wields of this world.  Hmmmm,  slightly invalidates it doesn't it if this is true?  Well, it gave me food (beer) for thought, and what with the traditional pub surroundings, an enjoyable pub visit! 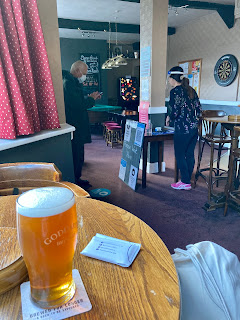 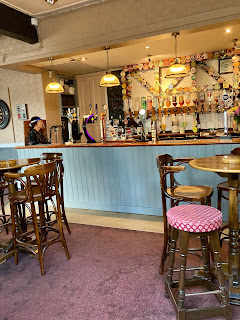 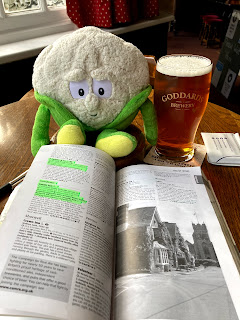 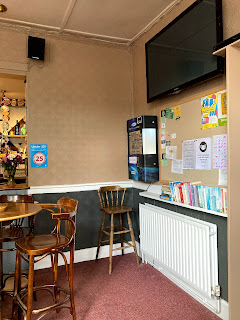 Now, I headed all the way back into Alton for another 4pm opener, this time a pre-emptive I'd had highly recommended, plus they seemed a nice bunch on Twitter.  As I did so, I glossed over the striking Railway Arms (surely a decision that wouldn't come back to haunt me, or would it?)

As is tradition with micropubs, it was set back off the main drag, and I got lost trying to find it in a myriad of shops, but mainly because I walked in the wrong direction.  Pub 5, beer kicking in?  It always does at this time of day ..... 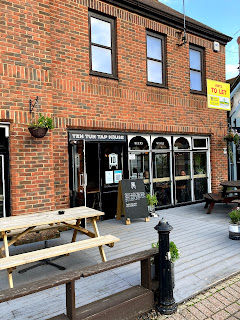 Ten Tun Tap House, Alton has pre-emptive certainty, based on the sort of debutants I'm used to seeing.  As soon as I walk in, I hear a voice call 'Simon'.  Oh dear, this 5th pub of the day always has my mind playing tricks, but when I look up, who do I see but our North Hants hero of day one, Citra Mick!  Yes, he'd dropped me a message on Twitter to say he was coming here after work, but I'd not seen it, and notifications don't pop up on my phone.  I decided to employ BRAPA Pre-emptive clause 14.1.a and just order a half, something deliciously murky I think from Siren, the same people who did that moreish beer we both drank in Clapham Junction's ridiculous Four Thieves thing.  The young guy serving seems pleasant, and the big thing about this place is that it opened on 18th March, just TWO days before lockdown shut the pubs.  Talk about unlucky, they'd worked for months to get to that point.  Surely the last pub to open before lockdown?  Something to tell the grandkids I guess.  And probably means it can't be considered for the 2021 GBG, but watch this space for 2022.  Citra, being the legend he is, devises a plan for my final evening tomrrow involving driving me to a couple of rural outposts and trying to get some of the Hartley Wintney crew along.  Superb.  I say goodbye, he stays on for another, but I'm determined to get another tick in. 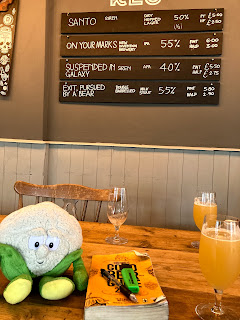 Yes, I kept having to remind myself that part of the reason for basing myself in Basingstoke(!) was the proximity to Surrey to finish some of those pubs I never got to in late July-early August.

The last notable one on my list was a 'Spoons at Camberley.  Camberley has a railway station, so how come getting there became so laughably difficult?

A change at Ash Vale.  Fair enough.  But I wasn't in the front carriages, couldn't get forward in time to get off, had to get off at Brookwood, change for Ash Vale again, then we had a delay, and it was really late by the time I finally made it to Camberley.  Freezing and pitch black too.

I decided I needed to get my evening snacks now, in case all the shops were shut when I made it back to Basingstoke.  Hard to locate one in the devilish Camberley night sky, I skirted around this ginormous bus depot, and upon realising Sainsbury's is in the shopping centre, I go in.

When I locate it, it has already closed.  And then, I can't get out of the shopping centre cos they've locked me in!  A stern Aussie guard wielding a giant set of keys lets me out of a side entrance after a quick Q&A to make sure I'm not a ghost.

I've totally lost my bearings now, felt like fate has constantly been against me getting this pub tick every since I first arrived in Guildford in July.  I walk all the way back round, where an Aldi is still open.  Students galore!  One checkout open.  Huge queue.  Hardly anything left on the shelves.   I've already missed my planned train to Basingstoke, and in danger of missing the next one.

Totally fraught, I jog, clutching my snacks, straight for the 'Spoons which is right by the station.  I can hear people lurking in the shadows, laughing like hyenas.  Every night feels like a Saturday night in Camberley.  I'm going in. 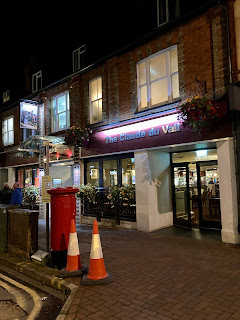 In a moment of barmanly wonder, this young lad, possibly on seeing the desperation in my eyes (again he sounds Australian) tells me he's quite happy to get me a drink without me using the App, he even  takes me within seeing distance of the bar to glance what's on offer!  I know I said the App was ultra quick in Fleet, but human service is always always always preferable.  I was on such a tight timescale now, Every Second Counts as Paul Daniels once said.  Phew, welcome to Claude Du Vall, Camberley (1886 / 3103).  No chance to wait for my murky pint to settle, luckily it was good quality, Guardsman by Windsor & Eton.  Despite the late night feel, and collection of young dudes sprawled out all over the place, this 'Spoons had quite a warm contained feel to it, a lot better than the duo in Basingstoke in my opinion.  Fleet perhaps could get like this on an evening.  The Holybourne guy had said 'Wetherspoons is a swear word in our pub!'  Well, not here for me right now, my late saviour.  And if you want a boring BRAPA stat, this pub meant I'd already surpassed my entire September pub total (on 6th October, 8:30pm).   I had to drink quick, really need to catch this next train! 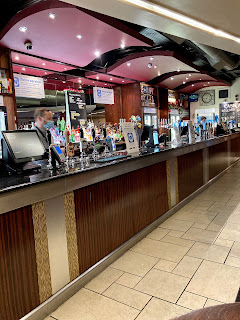 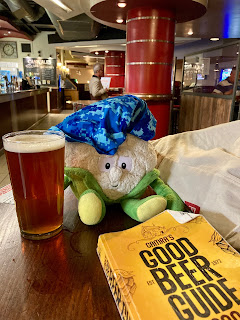 Despite another painful double change at Ash Vale and Brookwood, everything is on time.  Look, someone has even left me a bit of extra dinner ...... 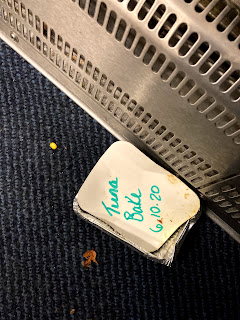 Join me tomorrow in part 9 for my final day, I have an interview to attend!
Cheers, Si