I was going to sell this one as a (slightly early) BRAPA Hallowe'en Horror Show, but then I figured that regular readers of this blog have probably noticed that approximately 82.7% of blogs I write could fit into the horror category.

I was back in the GBG's 'inset' North East Hants section on the morning of my penultimate day of my holiday, Tuesday 6th October, looking for the six daily ticks that keep the doctor away.

Jumping off the train, and leaving the station, I thought a little joke might be a nice way to start the day .....

It was an annoying twenty minute walk from station to the 'hub' of Fleet, where the action (AKA the local Wetherspoons) was situated.
And what a friendly place, especially the women aged between 30-50, what a smiley bunch.  Never have I felt more popular, I think I'd be a married boring graphic designer or  something if I'd grown up here.  Heart-warming.  Could the 'Spoons follow suit? 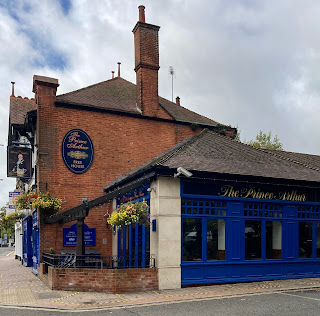 Well, at least the Prince Arthur, Fleet (1882 / 3099) was doing a bustling trade on this unlikely grey Tuesday morn.  One of the smaller pubs in the chain you are likely to see, this certainly helped it look busier.  The downside of the tighter spaces was that the perspex screens seemed more suffocating, than in say, Chancery Lane's Knights Templar where you could pretend they weren't there.  I  felt a bit like a goldfish in a bowl, as I perched on a high table opposite the bar.   Two young blokes were presented with two enormous full English breakfasts.   "Gorrr, I've had three hours sleep and am VERY hungover, no way I'm going to eat all that dahhhhling!" one of them moans, cockney style, to the waitress who I assume he knows, before dramatically face-planting the table in comedy fashion.  Not quite sure why he ordered it then.  Had I channelled my inner Marcus Rashford, I'd have gone over, mask on, scooped half of the brekkie into a doggy bag, and taken it round to the local primary school and given it to a starving kid.  Waste not, want not.  I of course, was on the Wetherspoons App, and after the Wadworth nonsense in Old Basing yesterday, what a delight it was to use an App as simple and intuitive as the 'Spoons one.  In fact, a contender for highlight of the week followed.  I glanced up at the bar, no less than 10 seconds after pressing the 'order' button and see a pint of what I've just ordered being pulled.  Can't be can it?  It was!  I tell the main lady, who was impressive throughout, how amazed I am by the speed of it and she seems chuffed.   Okay, so it tasted like adhesive, pritt-stick glue to be precise, but you can't have it all. 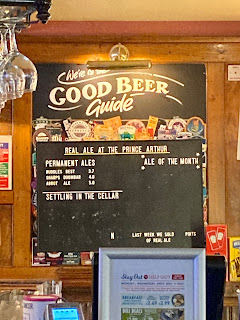 With no bus forthcoming, I continued down the road at quite a pace as Fleet turned leafier , acorns and chestnuts littering the pavement, the smiles of locals continued, and then a quiet muddy track along the river was a good place to stop for an impromptu wee. 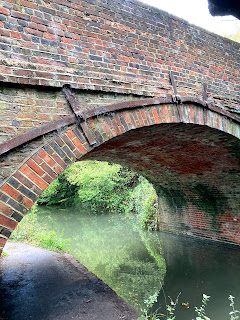 Before long, I was in Crookham Village where next pub Spice Merchant (1883 / 3100) was thankfully open, just past 12 noon (you can never take it for granted this early in the week in the more out of the way spots). 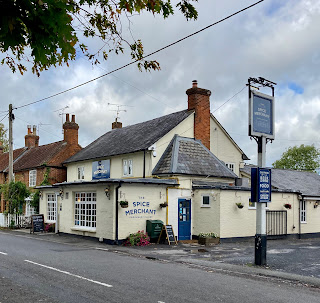 I'd been told, probably by our old mate Citra, that this was once a very traditional old pub.  Sadly, these days, it is a glorified Thai restaurant serving real ale, and the decor and seating offered a bland example of the modern GBG entry.  However, the 'Holy Trinity of BRAPA Positives' (which I've never mentioned before), saved it to a large extent, from getting the slagging off the 2014 me might've given it.  Firstly, top beer quality.  One ale only, Timmy Taylor Boltmaker (AKA Best Biter).  Not a beer that normally excites me.  But kept immaculately.  Secondly, great staff.  Yes, the couple who bossed this place were friendly throughout.  Mrs Spice was a fan of Colin, and so was the chef, who kept looking at him, licking his lips.  "Do you have cauliflower on your menu because he is a bit worried?" I asked Mrs S.  And she laughs in a way that could only be a 'yes', though not sure she properly heard me.  And thirdly, premium pub temperature.  The acid test in this category is would Daddy BRAPA remove his coat/jacket, but not go for a wander outside cos he is 'too stuffy'?  The answer here I'm sure would've been a yes.  Not bad for a 'pub' with too much grey, magnolia, pale blue, and wide open spaces.  Even Elton John's Greatest Hits could only slightly spoil it.

Working Hallowe'en blog title had been Pumpkin Spice Merchant Latte or something, but it didn't really work.
A long walk back to Fleet station followed, gotta get that step count up, ward off the beer belly, and I even popped back in the Prince Arthur to use the loo as the staircase was right beside the entrance.
Had there been a similar fleet of taxis in my next town, Alton, I  might've jumped in one and tried to get something like Lower Farringdon done.  Alas not, so after a spot of late lunch, I headed to pub three.
Unforeseen problem as I rounded the corner, just after 3pm, the kids were piling out of the local primary school (could've dropped that breakfast off), and there's me stood opposite, brandishing a camera trying to take a photo of the pub.
A hybrid lollipop lady/teacher/Mum looks alarmed, so I have to do everything in my power to demonstrate I'm photographing pub only.  I did try and wait, but that just looked like I was loitering so I just had to wait for a gap and get on with it.  The sacrifices I make for the benefit of this blog.
"I call this a boozer, not a pub!" bellows the only other customer, as I sit opposite him at the Eight Bells, Alton (1884 / 3101) and peer round to the bar to see what ales are on offer.  A cracking pint of Flack's Double Drop if you care.  I hadn't asked, but he seemed determined to control the narrative of a blog he didn't know existed.  "People don't come 'ere for food, they come to drink and chat!" he adds, which I think was code for 'I'm not going to give you a minutes peace during your 27.5 minute stay so don't even think about being an unsociable bastard'.  Seriously though, nice guy, the type who loves a visitor so he can impart his local knowledge, which he did in abundance.  One thing I couldn't quite get past, for all his sensibly attired top and trousers, he was barefooted, save for a flimsy pair of brown sandals.  I couldn't quite capture them on camera, but it was so incongruous with everything else about him, I assumed he must have some medical condition involving hot feet.  He tells me the tale of Sweet Fanny Adams, a local girl who was chopped up like corned beef and is buried in the local churchyard.  He talked like it happened last week, but it was ages ago.  Not sure much happens in Alton.  When he found out I worked in a bank, he told me both he and the landlady decide putting their money in premium bonds was better than having a bank account, I swirled my head confused skeptical-like, and he shouts to her "SEE, HE WORKS IN A BANK AND HE AGREES PREMIUM BONDS ARE THE WAY TO GO!"  He'd already growled "that's the baby!" when I got the Track n Trace App to work.  Born in Dewsbury too, he told me he's not sure where his accent went.  South, I guess.  People like him make pubs, I was astounded he got up and left before me.  The pub just wasn't the same after that.  Nice and cosy, as I sat in the old fireplace!  But lacking his unique local hospitality.

Right, that seems like a good way to end part 7.  Three more pubs coming up, one pre-emptive.  Cameo from an old pub favourite,  And one of the hardest slogs to get to a 'Spoons on a train line I'd ever witnessed.  See you on Wednesday for that.