It hadn't been a magical start to my Hampshire BRAPA debut trip.  With the rain pouring down, I was grateful for the Citra-mobile guiding me around the more rural spots, with great company and local knowledge to boot (not just saying this so he offers to do it again, honest!)

North Warnborough had put up a decent if unspectacular showing, but both Long Sutton & Newnham had been, as the Twitter 2020's like to say, 'problematic'.

Thankfully, the sun had come out, and that was to herald an upturn in fortunes as we headed north into the awkwardly named village of Hartley Wintney - I never could get used to that 'ntn' consonant sequence all week.  I'm sure they do these things to trip up the casual one time tourists!

Waggon & Horses, Harley Wintney (1866 / 3083) opens up into a jovial outdoor hive of local fun and 'bantz' where everyone knew Citra, and were seemingly highly anticipating our (well, Colin's) arrival.  Such a whirlwind of camaraderie and conviviality, it was hard to think of this as a solely outdoor pub experience.  In the covered smoking area sat the more regal types, like Big Steve and Big Nige.  Further down the garden, in a line, on a wall, sat a motley bunch of Citra mates, funny guys one and all, I perched on the end.  Most notably, Little Tony (yes, the nicknames are all imaginative down here) who had recently read a historic BRAPA blog from when I went to Polbathic, and I had to struggle to recall the details.  Beyond us, a canvas tent with all manner of exotic goings-on inside, I presume. The guv'nor was a fine fellow too, a masked South African (less sinister than it sounds), very welcoming and had a name I can't quite remember but was something like Mel & Kim, or Pepsi & Shirley.   Citra bemoaned the current restrictions from allowing me to experience the indoor atmospheric character, but we must roll with the punches in the current climate.  A quick trip to the gents offered a tantalising glimpse at the indoor character.  I lingered in the room with a roaring fire for a minute, just to soak up the atmosphere.  Reminded me a bit of Mary Kelly's room, post Jack the Ripper visit, but more ornate and less bloody.  Whilst pissing, I say 'alright' to a geezer, and he shouts back "living the dream mate, you?"  I contemplated this for a second, and then realised yes, in a way, I literally was living a dream of some description (not that it involved a burly bloke urinating alongside me).  I return outside where Colin the total tart of a cauliflower, is having his photo taken with all and sundry.  Reminiscent of my visit to Rovers Return in Douglas, Isle of Man courtesy of Mr Halliwell, I left, grinning from ear to ear, a bit hazy, knowing I'd enjoyed the pub, but not quite sure what had actually happened.  I guess a lot of locals leave the pub in this same state.

So my North Hants holiday had finally come to life, and one more stop on the Citra trail before I'd go and check in at my Basingstoke lodgings. 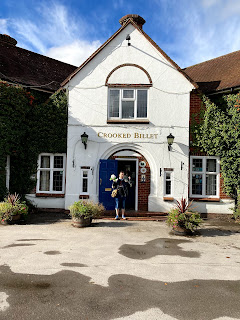 And if the Waggon was day one's best pub, the Crooked Billet, Hook (1867 / 3084) was easily my second favourite.  The location was surprisingly non-townie, but off-centre road side, it was the warmest, cosiest with plush carpets and a roaring fire that this time, I could actually enjoy.  Welcoming too, in a low-key way. Again I got to ring a bell for service which always makes me feel I'm being impatient (I remember doing it at the Sun, Waterbeach, not realising the barmaid was approaching, and she looked like she was going to punch me in the chops).  The Tim Taylor Landlord was in immaculate condition, and the atmosphere so soothing, almost dangerous!   Being the notorious 5th pub, I'd probably have fallen asleep Fox & Hounds Caversham / Cross Keys Chester style if it wasn't for Citra's company.   The one moment of peril was the trip to the bogs.  Two huge dogs, both called Phoebe, were splayed across the floor.  I hesitated, and the owner tells me to simply step over them!  Easier said than done in this state.  But when I went for a second wee later on, this time I try confidently striding over the dogs, thinking I now know the drill, but one moves a bit and the owners like 'woahhhh woahhh'.  How I stayed upright I'll never know.  Once in the gents, the extra reward was a series of 'hilarious' birthday cards stuck on the wall.  Take that Brunning & Price weird Victorian humour, this is how to make us laugh!   Very nice pub this.


Citra dropped me back at Hook Station, and I said so long, thanks and farewell for a cracking session which would've been impossible to achieve without him (or would've taken me about two days!)  He would be back, with one of our afore mentioned Hartley heroes, so watch out for that in Part 10.
For now, I checked in at my Basingstoke Premier Inn (basically a Travelodge with a comfier bed), unpacked, had a wash, ate some food, drank a bottle of water, and watched a bit of Celebrity Pointless.  "I'll just rest my head on the bed for the final round" I thought.  2.5 hours later, I woke up!  It was pitch black, the rain was hammering down harder than ever, and I STILL needed to get a pub done to get up to the magic SIX number.
Four pubs to choose from, I passed up on both Wetherspoons when I saw the crazy queues outside.  At the Angel, it snaked around the corner.  All twentysomethings fresh outta Nandos or whatever.  Take that 'Spoons hating Twitter who think only old ruddy faced blokes go!
Yes, it might have been cold, wet, dark, and we might be in a state of semi-lockdown, but it was obvious the Basingstokians are a spirited lot, and won't let anything dampen their Saturday night of drunken mayhem.  That theme carried on into the pub I finally settled on ...... 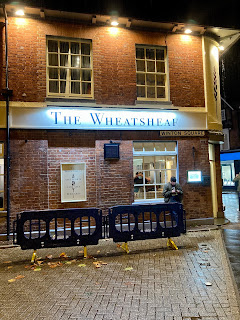 If the Wheatsheaf, Basingstoke (1868 / 3085) is memorable for one thing (and let's face it, it was an incredibly unmemorable pub in so many ways), it was the highest decibel level I've witnessed in a pub since 4th July.  I guess this is what town centre pubs WERE like pre-lockdown on a Saturday night, I've just forgotten!  The staff were first-class, let us not forget that. It was busy, but they were welcoming, kept checking I was okay(!) once they realised I was alone and only after one pint.  They sat me up on this makeshift ledge facing a wall & a giant plasma which zoomed in on the large faces of Steve Bruce and Sean Dyche with unnerving regularity.  Not that anyone was watching the football, everyone was just dancing around (within their own groups of six, obviously!) The pint of Otter went down ok, can't say I particularly enjoyed it, and a scary yet smiley lady showed her southernness by getting a pint of Carling, and immediately scooping the entire foamy head into an empty glass!   Had this been a pub I did in my early BRAPA stages of life, I might've felt a tad self conscious, especially with that flippin' Cauliflower for company, but even when 'my' barman went out for a cigarette, leaning on Dominoes Pizza opposite, he seemed to be alert to pub peril.  I just pretended I was into the football most of the time, but it was with some relief when I finished my Otter and got outta there! 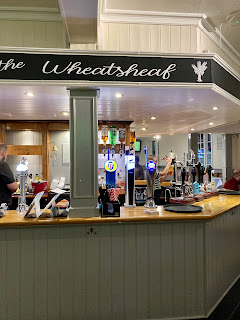 Problem was, the 'ticking' gene had kicked in again now and I wasn't ready to call it a night.  After all, there'd be some days this holiday where getting to six pubs might be nigh impossible, so if I can do seven now, takes the pressure off, right?
North of my Premier Inn, using my facemask as a headscarf to ward off the rain, I trudged down an unlikely quiet lane, onto the edge of a waterlogged cricket pitch, and isn't it hard to take photos in the dark when you are a bit drunk? 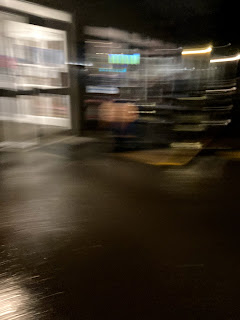 Let's try that one again shall we?
My arrival at Basingstoke Sports & Social Club (1869 / 3086) seemed to throw the staff who 'greeted' me into a temporary spin, as I admitted I'd never been here before, I was a 'CAMRA',  I needed to know what ales were on, and yes of course I'll sanitise, sign in, keep my mask on til I'm sat down, yes I understand the complex (at this time of night) one way system,  and I'll pay by card if that's okay with you but I do have cash.  Phew!  Clubs had a tendency to be like this pre-Covid to be honest!  Also, I only have one pair of hands.  The most shocking thing though was next day when I checked my online banking and saw what they'd stiffed me for my pint of Sunny Republic.  £4.30.  Club prices are normally noticeably cheaper, and were on recent visits to Woking & South Benfleet, well under £3.  Unless I had an ice cream I can't remember.  No wonder I overheard the locals moaning to poor Dave "a tenner doesn't last long these days!" as our erstwhile custodian seemed to be having problems actually getting the cash off them at last orders!  The locals were a jolly bunch, well when they were talking amongst themselves and not scowling at Col, one had a Sheffield Utd facemask which I found incredibly disappointing, and more than one group managed to shoehorn 'Bourton on the Water' into conversation when there was simply no need for it.  I couldn't escape Burnley v Newcastle and was actually getting drawn into it.  The ale was good, this was a calming atmosphere to enjoy a pint, but I couldn't help feel it lacked something.  Still, easily my fave Basingstoke GBG tick. 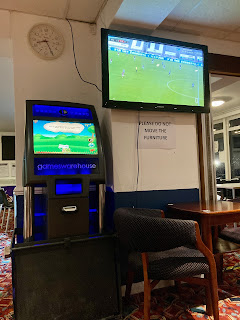 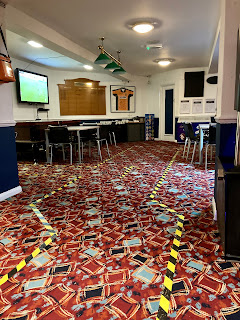 'Time for a 'Spoons after all?'  I wondered, before quickly remembering last orders here meant last orders everywhere!  Probably just as well, I was meeting a BRAPA debutant in the morning who was kindly taking me my most difficult remaining Surrey pub.
Join me on Friday for part 3, it's a real tale of woe!
Take care, Si