So, the end of my five days in North Hants and the final hurrah would prove to be one of my favourite times of my stay.

After the traumas of Oakley earlier, I'd had a nap in my hoteland made my way back to Hook.  As on my first day, Citra Mick had volunteered to drive me to two of the more rural outposts that so far remained 'ungreened' in my Good Beer Guide.  Absolute gent.

Sadly, Little Tony couldn't make it, but Big Steve, who you might remember from Hartley Wintney as one of Colin's 'minders' joined us, and it was he who hopped out of the car to greet me / let me squeeze in the back.

On the way, we found ourselves driving straight past a third GBG pub at Mattingley, even harder than these other two to achieve by public transport.  Citra says "if we have time, we can do that one too" and I was positively jumping for joy in the back seat.  Steady on Si, it's only a Brunning & Price.

Our progress was slowed by an interminable wait for a train at the level-crossing, this was like being in outer Doncaster, but with more trees and less despair.

There is a limited bus service to somewhere within walking distance of this pub, but the rural location was Long Sutton-esque in its ability to hide, undetected in the middle of nowhere.
Dusk was just setting in as we arrived, and Big Steve & Citra took their opportunity to pose BRAPA style ..... 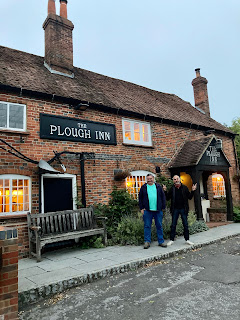 Well, I was gobsmacked.  A late contender for 'pub of the week' if I ever saw one, Plough Inn, Little London (1889 / 3106) was a joy from start to finish, the gentle ancient atmosphere you could almost touch.  No surprise that at one point, we were discussing the Bell at Aldworth, and then some gadgie on my Twitter compares the two just half an hour later.  Difference of course, the Bell is kind of famous in its own right, this pub?  Well, 'hidden gem' doesn't do it justice.  Farmhouse style, low old beams, had this beautiful old clock like I'd never seen before, and the three of us contemplated being snowed in here on a winter's day.  To prove I'd been paying attention to Citra, I ask the landlady "is it true you are cash only?" as we sit down.  She says yes.  I go to pay.  One of the chaps beats me to it.  "Awwww" I groan convincingly.  "You can buy the next ones!"  she says.  Errm, has she never read the rules of BRAPA?  "That guy you can see over there is the landlord" says Citra, lowering his voice leaning in.  "Ah, is that his brother then?  They look almost identical?" I ask.  "Hmmmm, not sure ..... village life, I expect" replies Citra, a quick smile flashing across his face.  Say no more, say no more.  Now I think about it, the two younger guys on the back wall look kind of similar too.  "You staying for another?" asks Mrs Plough.  Citra and Steve look at me as one, expectantly.  "NO!" I say, rather too forcefully (Mattingley in my mind).  As we get up to leave and say thanks & bye, I quickly tell her I'm definitely buying the round in the next pub.  She seems to believe me, which is good. 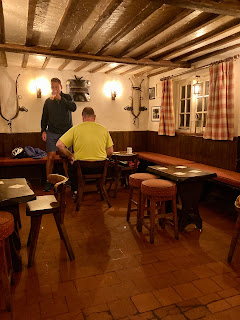 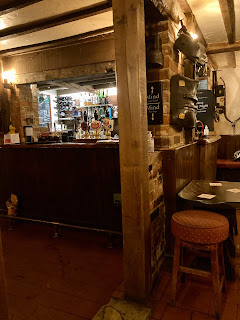 Back in the car, I marvel at how dark it has got, then realise I sound like I don't understand how day and night work.  The gents humour me.
Back at the level crossing, guess what?
Pub two then, and a couple of unconvincing signs before we'd even got inside ......

If Steve had expressed a great deal of surprise that Four Horseshoes, Sherfield-in-Loddon (1890 / 3107) was a GBG entry, then half an hour later, I could sort of understand why.  It was a bit of an overly bright, overly stark, bare boarded echoey place, partitions abound, but that didn't stop it having a 'howl at the moon' atmosphere, locals peering at us from all angles on arrival.  The four of us sat around a boring table, the barmaid a bit stand offish at first, but seemed to warmed to her task the longer we were here.  I was going to say the print on the wall showing all of Fulham F.C.'s kits through the ages was about as interesting as it got, but totally out of kilter with the rest of the experience, a totally sozzled bloke is dragged out of the pub by the arms, giggling, by two of his mates.  So quick, it was one of those 'did that just happen?' moments.  So dull otherwise.  The beer, which started okay, deteriorated to the point where it was pretty much off by the last couple of gulps.  Am sure that dreadful Lockdown bitter was on too.  "The four horseshoes of the apocalypse" says the occasionally very amusing 'Liquid Len El West Brom' on Twitter.  I'd say that's a pretty accurate summation!

Anyway, the good news was that time was on our side and Mattingley was still possible before these meanie 9:20pm (or earlier) last orders ...... hooray.

Leather Bottle, Mattingley (1891 / 3108) to end the night then , and to end a productive five days ticking in North Hampshire (I think South of the county will probably have better transport links, but more annoying shitey taps and micros).  As Brunning & Price pubs go, this felt strangely pubby.  It used to be a pub even before B&P got their sticky little mitts on it, so makes sense.  The ale was that 'Animal/XT' variety you seem to see in Oxford and parts of bum clenching West Bucks like Brill and Long Crendon.  Very nice.  Well, Citra says it is a bit cold and he's the expert, but it doesn't stop the pub retaining its 2021 GBG place.  I get called back for forgetting to put my mask on when I go to the loo, but otherwise, not much to report apart from the four of us (Colin included) sat in a row chatting and having a drink.  Not been in too many 'last orders' scenarios since the hours were curtailed, but the traditional bonging bell and screams of "last orders ladies and gents!" seems to have been replaced by some mousey bar person scurrying from table to table whispering "would you like any last drinks as we are closing soon, squeak, squeak?"  Though that could just be B&P policy.  We had an extra half, cos we could, looked at a funny little lawnmower, and called it a night. 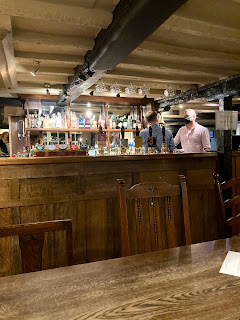 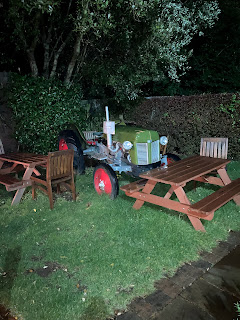 I said bye to Citra and Steve, who dropped me off at Hook, it had been a really fun evening.
I made my way back to Basingstoke, and was already devising a plan to come back to North Hants next Feb to tackle Winchester and some of the gaps that have opened up in the North. 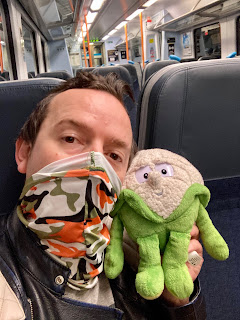 The most frustrating gap from tonight was Silchester.  So close to where we'd been in Little London, the guys even mentioned it!  But overall, the GBG cross-ticking has been quite kind Hants wise and my decisions not to try and tackle Eversley Cross, Lower Wield and Vernham Dean all proved good, as those pubs have been binned off anyway.  Charter Alley is currently only opening 7 hours a week so it can fuck off.  Wonston twins better with Winchester.  And Wherwell is real Andover 'one bus a day' territory.
On the train back, I suddenly realised the perfect symmetry regarding the last two pubs versus the first two pubs of my holiday.  I started in a rural Brunning & Price with Citra (North Warnborough) and finished in one (Mattingley).  My second pub (Long Sutton) had the worst beer of the week, Lockdown Bitter and a 'howl at the moon' yokels atmosphere.  My second last pub (Sherfield in Loddon) was very similar!
If you thought BRAPA weirdness was reserved for pubs, the train journey back provided similar fun.  An old lady from Brixton starts chatting to me. She gives me her cheese sandwiches for lunch as she's made too many.  I ate them when I got home, 7.5/10, with a bit brown sauce added.  She likes the BRAPA concept and soon is singing me a song about hop picking which she used to do as a teenager.  I help her off with her bags at Newark, and she's off to meet her daughter at a BRAPA required tick called the Final Whistle at Southwell.   It felt like a fitting end to the holiday.
Join me Sunday for tales of North Yorkshire & Essex.
Till then, adios, and keep it Tier 1 or 2 (if you can!)
Si