BRAPA IS ....... SET ADRIFT ON MEMORIES OF PENRITH

The last Saturday before Christmas found me in Penrith, one of my more pleasing Cumbrian towns to complete, having both a railway station, and three pubs listed under it, not to mention two outlying villages (Dacre and Langwathby) that looked kind of doable if I was willing to shell out.

The 'six pubs a day' rule kind of goes out of the window in Cumbria, you've just got to be grateful to do what you can, it always seems to be a race against time unless you are staying over night.   What's more, it was the shortest day of the year.  This stressed me out, until I remembered the day still does actually have the regular 24 hours!

Penrith station was trying to be all amusing and quaint .......

And one of the pubs was an 11am opener, great to get off to an early start though a highly inappropriate modern fence and smoking hut meant finding the entrance was like being on the maze on Saffron Walden common, though I admit I could've just walked to the left ......


In different circumstances, Agricultural Hotel, Penrith (1666 / 2883) could've been the kind of Cumbria classic hotel bar this county really thrives on - I'm thinking the Badger at Rydal and the Cumberland at Alston, for example.  But it wasn't to be a particularly lucky or joyous 25 minutes here.  The staff were gathered in a huddle laughing about one of their colleagues who was still wearing pyjamas, so I smiled broadly as I stood at the bar but as soon as they saw me, they went all quiet and po-faced serious on me.  A better pub would've carried on regardless, or even semi-included me in the joke.  I thought I'd found a great seat opposite the fire but immediately a group of American tourists rucksack heavy blocked it for ages to warm their selfish fat asses.  Normally Americans in British pubs in my experience are joyful, overly deferential and open, but these exuded all the charm of a 57 year old tattooed bulldog from the gut of Doncaster, laughing only to scoff at the term 'crusty roll' they'd seen on the menu.  I'd spied a bus an hourly bus earlier than I'd be expecting to take me out in the direction of Dacre, so I decided to drink very quickly.  Thankfully, the ale was light, seriously downable and high quality.


I didn't realise the next part of the day was going to be quite so intrepid, as I took a (delayed) bus to the village of Stainton, the closest I could get public transport-wise to Dacre from what I could see without killing myself!  However, the A592 through Dalemain was a bit scary, and solace only came at the turn off to a huge mansion and gardens, which took me around the back onto a dirt track full of farmers pointing guns in my general direction!  They'd come from Stalybridge especially.

Martin Taylor had rescued a stuck sheep here a couple of months back, and you could see why, tonnes of them as I ascended the small hill past the castle to the village ........ 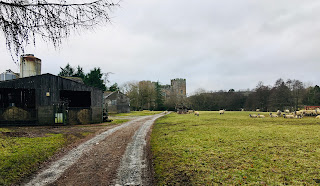 Then a man in a car nearly reversed into me.

I like to think it is this kind of scintillating exchange which sets BRAPA aside from other blogs.

I'd put 'Dacre' into Google Maps instead of the pub name, so walked the wrong way in a Gussage All Saints moment of confusion, before I realised. 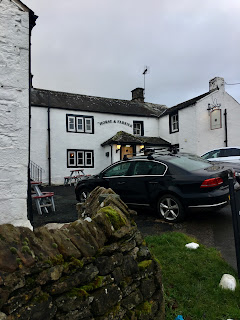 Horse & Farrier, Dacre (1667 / 2884) was very top heavy on the ole' dining side of things. "What'd ya expect ..... they need to do food to survive" people always remind me, but look back to Loppergarth, Holmes Green and probably countless other rural examples where if they indeed do do food, they don't slap you in the balls with it quite so much.   Here, a duo of saccharine smiling, clipboard menu wielding barmaids asked "are you looking for food today?" before I'd even so much as glanced at the ales on offer.  With a bag heaving under the strain of Mum's homemade sausage rolls, cherry tomatoes, mini cheddars and a bonus scotch egg (in case of emergencies!), I politely declined and enjoyed my Proper Crimbo ale (though it wasn't superbly kept) from the corner, and smiled insipidly at every customer who did walk through the door and mention their reserved tables.  32Sausages was the WiFi code, the music was verging on Mumford & Sons at their worst, and eventually a local dude came in and told an Emmerdale joke that Barmaid 2 didn't get.  'Twas all a bit twee, but the staff were nice, the building old, and I appreciated the sentiment!


I'll admit the pub experience was not helped by my feeling of restlessness from being so far from civilisation.  I didn't fancy the walk back again, and even then, I'd need to take a connecting bus JUST to take me back to Penrith.  Not ideal as Langwathby, the other village I wanted, would then need a taxi as the trains don't go from Penrith (I think!), and the bus service is non existent.

So I bit the bullet and decided to taxi it.  Sure it'd be expensive (Langwathby is on the other side of Penrith) but I'd got my Christmas bonus at work the previous day and only half jokingly told my colleagues it'd mean I could get a taxi from Plockton to Fort William to get two pubs done.

He was a lovely guy, the taxi driver, so we had a 'deep dive' BRAPA chat on pubs in all those classic places like Birkenhead, West Kirkby, Heswall and Thornton Hough.   He even refused to take a tip off me, claiming it was expensive enough, making him the first scouser who has ever refused to take money from a non scouse human in the history of Britain.  And that is a BRAPA fact. 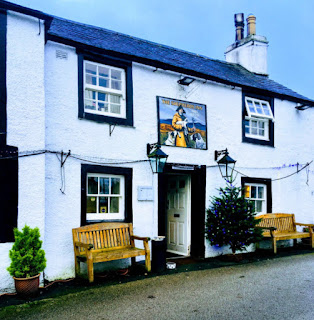 The pub looked optimistically bright and inviting, with a bit of watery sun in the sky for the first and only time today.  And Shepherds Inn, Langwathby (1668 / 2885) was a low-key contender for pub of the day.  It was perhaps a bit too light and airy (though i was sat in the front window to the left) to be an all time rugged pub classic, but it certainly had a homely village feel.  The couple who owned it were lovely, and the landlady started chatting to me like a local the second I walked through the door (are you watching Agricultural?)  I think we established her son did the exact opposite commute to me (he lives in L**ds but works in York) before I'd even chosen my Tirril Ale (another new Cumbrian brewery to tick off the list!) and the pub locals and other staff responded in part, plenty of friendly smiles as I decided to perch at a side ledge, rather than take up a table in what again, was a pub looking for visiting diners - though less blatantly than Dacre.  One person who didn't appreciate my presence was an old local man, sat below the bar.  Sure, he chatted to all the young ladies like a reet old stud, but THREE times my smile was returned with a definite scowl.  His wife was lovely though.  Funny county Cumbria, really 50/50 on the friendliness.  Nowhere near as good as neighbouring Durham and Lancashire.  I pretended to read Private Eye for the first time in my life and look intelligent, but I didn't really get the jokes inside, so chuckled at a picture of Christmassy sheep on a wall instead.  BRAPA has to keep an empty mind!  A younger barmaid crashed through a wall akin to Nanny in Count Duckula.  "OI'LL BE WANTING A POWER NAP BEFORE I GO OUT TONIGHT, BUT THAR WON'T HAPPEN!" she exclaimed, before explaining why for the next 40 mins, in which time she ironically could've had a decent power nap.  Good pub this.


Still work to do, and I'll tell you all about that + a bonus West Yorkshire tick tomorrow.

And if you follow me on Twitter, you'll know I had a New Year's Day disaster in Sheffield, and NOW I have flu so am gonna go to the Rotherham game tomorrow but not do any pub ticks as am too poorly, though half a stout in Draughtsman Donny or York Tap might happen!  Roll on 2021.