BRAPA AND THE IRRITABLE OWL SYNDROME : LOST IN COCKERMOUTH

Just to recap, Father BRAPA and I had just left Tallentire where we'd been to the superb Bush Inn, a 6pm opener on a freezing cold Saturday night in north west Cumbria.

It hadn't been an easy day .... even with the benefit of 'being in the car' but buoyed by this recent success, all that remained was to get ourselves the few short miles back to Cockermouth, dump the car, relax and enjoy the three pubs in the town.   As those bloody dreadful Meerkats used to say, 'Simples .... squeak' ........


Nothing is ever 'simples, squeak' in the world of BRAPA, I should know that by now.  Never rest on your laurels, although I guess in this case, the laurel was resting on the road!

The shock of it made me suddenly choke on the sausage roll I'd been eating, then I realised I needed to pee badly, so with the aim of alleviating both of these problems plus attempting to move the tree, I burst 'Action-man' esque from the passenger door straight into the grass verge, only to step ankle deep into muddy sludge ruining my wholly inappropriate New Balance trainers.

The tree wasn't budging, Dad got out to help, but it had nowhere to go, at least I'd pee and dislodged the sausage roll (not in the same motion!)  As you might be able to tell from the above photo, no way Dad could turn the car around on this single tracked country lane, so all he could do was reverse in as straight a line as possible with me as commentator!

It was a relief when a turning into a farmers field allowed us to turn the car around sooner rather than later, and we took the long was around to Cockermouth.  Jeez, think we were both ready for a pint .....

But there was to be little room for relaxation at the Castle Bar, Cockermouth (1693 / 2910) as we were balls-deep in Saturday night festivities.  It wasn't exactly late on, the Newcastle v Chelsea game was in its dying embers at a deadlock 0-0 if that gives an idea of the time we were here, and yet there was a surprising amount of total pie-eyed local Cockers.  One lady threw her arms above a plasma and sang 'Don't You Want Me Baby' by Human League in a passionate non-ironic way, as if this song is actually top of the 'hit parade' in Cockermouth.  I wondered if folk had shunned the brighter, trendier lights of Carlisle (a sentence I thought I'd never write) for a night in their home town.  I brought our pints to the very back room where Dad had positioned himself.  In the absence of a table, we sat on old cinema seats gripping our pints tightly, relieved when Human League lady told her incomprehensibly drunk male counterpart to down his pint, cos they were off.  Even more incomprehensible was Newcastle's last minute winner.  I didn't need to see Steve Bruce's face in widescreen, and when Dad commented of the goal "that was wonderful, no one could fail to enjoy that moment", I thought of a few Sunderland fans I know.  Despite the relative chaos of the pub atmos, a glance around at the sloping layout, stone walls, breweriana (I hate that word!) made me realise it'd make a very nice experience in calmer circs, and the pint of Hawkshead Pale was as wonderful as everything I drunk on this fateful weekend.


It felt like roles had been reversed between Dad and myself.  I spent the whole of 2019 bemoaning his coat with the infuriating zip he could never do up.  And he spent the year bemoaning my lack of 'dressing appropriately for the weather'.

And here we were, marching through Cockermouth in sub-zero temperatures.  Me with my new sensible chunky new winter coat, but with impossible double zip, and him striding out in shirt and thin jumper like some Cumbrian party boi.  'Absolute scenes' (as us kids say).

Our next pub wasn't too far luckily - not having a near 73 year old ending up with hypothermia on my watch!

'Oh yeah, Cockermouth is the home of Jennings, ooh goodie(!)' was my first thought as we entered the cosy atmospheric ancient Swan Inn, Cockermouth (1694 / 2911), hoping ordering a pint of Jarl instead of a Jennings didn't make me some kind of visiting ale scumtwonk.  But I do love a Jarl, and why was the beer quality so good in all eight pubs this weekend?  You could spend a week in London without finding ONE this good.   Sounds an easy lazy slur for a northerner to make, but it is true, so stick that in yer Antic pipes and smoke it.  Not sure I liked Jennings (or is it Marston's?) modern branding though, pump clips like Wensleydale cheese and a strange scientific theme with all these protons, electrons and probably even neutrons flying around!  Anyway, we stepped carefully along the lovely stone flagged flooring, weaving around the pillars, to settle down below a TV where an ancient Martin Tyler was remembering a series of rather forgettable past encounters between Liverpool and Man Utd.   Still quite lively like the Castle Bar, but an older crowd.


Across the river in the centre of town, and down a cobbled icy death trap of a bank which evoked memories of the White Cross in Lancaster the other week (why are pubs always trying to break my neck?), it was time for the final pub of the night ....... 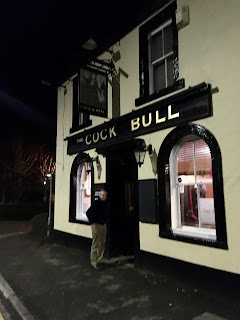 And I think I'd say we'd inadvertently saved the best 'til last with the New Cock & Bull, Cockermouth (1695 / 2912) putting in a fine performance - combining the olde worlde atmosphere of the Swan with the vibrancy of the Castle Bar.  We were back on the wonderful Great Corby ales where the night had begun in style at Great Broughton's Punch Bowl.  I seem to remember it being very cheap though obviously, I'm a bit hazy by now!  It was a disarming start as I observed a few visiting walkers and friendly gimmers dotted around watching the snooker, as we took our pints to a raised bit of bench seating opposite the bar and 'relaxed' and I'm thinking, 'proper old person's pub this!'  Without realising, a small group of 'younger' people were forming to my right, and growing in numbers by the minute, to the point I'm suddenly instructed to take a photo of them!  Crikey. "You should've got one on your phone for BRAPA" said Dad, and I'm thinking 'missed opportunity' when after five minutes of scrutiny, they must realise they don't like their faces according to me, and ask me to do another one, and one in landscape (jeez, demanding much!) so I'm like yeah, but on the condition I can get one of you all too for my BRAPA fans. 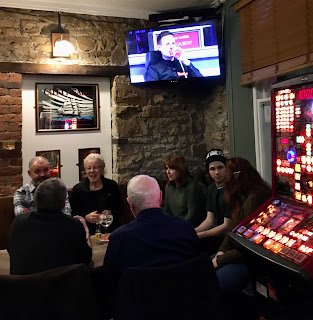 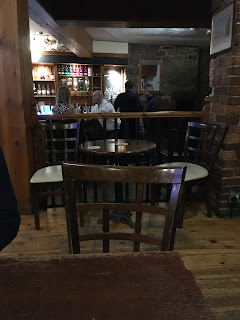 So that was all very well and good, off back to our underperforming Premier Inn for some snacks, water, MOTD and a very ropey cup of tea, before a good night's sleep and some pubs tomorrow on the way home which I'll tell you about shortly.

But on the Sunday night back at home 24 hours later, I was just dozing off when I thought "I HAVEN'T SEEN (BRAPA MASCOT) MARTIN THE OWL SINCE I GOT HOME"  Nooooooooo!  I searched high and low, Dad said he's not in his car, and I can't remember seeing him during our Sunday pubbing or when I was packing my bag.

Conclusion, he got left probably in one of the Cockermouth pubs.  After all, I did photograph him in Castle Bar and what with the flimsy Sainsbury's carrier bag, did I go to put him back in and miss?  But then again, I have half a memory of him in the Swan.  Maybe one of the Cock n Bull massive pinched him, though they look honest don't they?  Or maybe he just fell down side of my bed/sofa in the Premier Inn?

Well, I hope he gets to retire in a good pub.  I'm not about to launch a Facebook / Twitter appeal and don't expect a GBG-esque outcome.  He'd been with me less than a year.  And since he declared himself a Sheff Wed fan on New Year's Day, he's been going off the rails a bit.  More moody, more unpredictable, more irritable.  He may've got into drugs.   If you are ever in Cockermouth's above trio, look out for him.

I'll write a tribute to him tomorrow along with Sunday's two pubs.  It's gonna be emotional.