BRAPA is ...... MICRO MANAGING WITH THE MILLERS - A NIGHT IN ROTHERHAM

I have a real soft spot for Rotherham.  It was the first place I had a drink in a pub.  On the 25th March 1995, Dad shoved me behind the front door on a curved bench and ordered me a cheeky half of Fosters.  I have no idea what the pub was called, it was very close to Millmoor, not too big, and assume it got demolished when they moved grounds.  I drank my half in extreme fear, Dad's nervous expression didn't help, and then we watched us lose 2-0 and I remember we'd just signed Gary Lund on loan for a second time.  Two seasons before, we'd come here and he'd scored the winner but today, he headed it into the ground from two yards out and it bounced over the bar!  "They say you should always head it down" squeaked the 15 year old me to Dad, and he laughed.  See, I've always been funny.  I was probably pissed.

These days, I love a football trip to the Millers, and despite having flu on 3rd Jan, I was still allowed to enjoy one of my fave pubs in the UK, Cutlers, even if my energy levels meant I decided not to do my BRAPA pubs after the exciting 3-2 cup win. 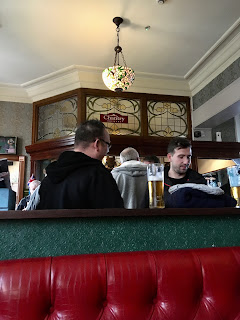 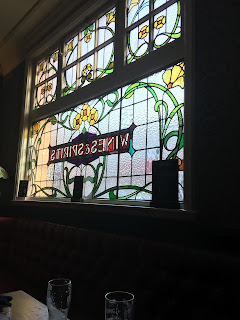 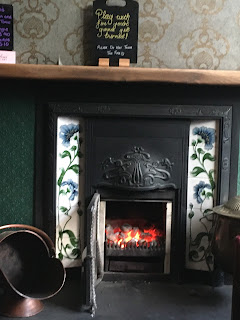 So what with my lethargic start to the New Year, I knew I had unfinished business in South Yorkshire and needed a boost to my January pub numbers.

Is Thursday the new Friday?  Friday was the new Tuesday, but is now the old Thursday.  Saturday remains the same Saturday.

What I'm trying to say is, I'm experimenting with doing my 'midweek' BRAPA on a Thurs in 2020.  A few reasons for this -  I'm always knackered on a Friday evening, always have a busy Saturday the next day, Thursday BRAPA allows me chance to write about it on the Fri, therefore leaving me less to do on the Sunday, and there's the double-edged sword of pubs often being heaving on a Fri evening, especially micropubs, which can make them uncomfortable and I often have to secrete myself in the coats by the front door (bit like back in 1995!)

Tonight's ambitious after-work trio were all self-styled micros, and if you aren't a fan of the micropub concept, these are probably unlikely to sway your opinion too dramatically.

A bit of top local knowledge from Dave B at work told me to hop off the train at Swinton and catch a bus to Rawmarsh from there, to save me time.  It made sense coming from a White Shiterley direction.

Swinton, Rawmarsh and Parkgate seemed to be teeming with solid looking old traditional pubs, turning the bus journey into a kind of "look what you could've won", (flat roofers, WMC's, gurning men in windows), still, no guarantee they sell any ale I suppose, not that I'm averse to a cheeky pint of Stones occasionally!  Alan Winfield would've done it justice. 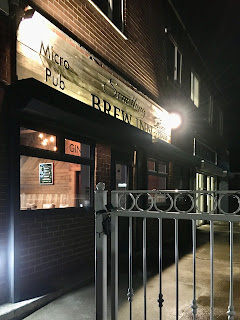 And now for the immediate flip side of choosing Thursday rather than Friday to do your pub ticking, as I entered the Something Brew Inn, Rawmarsh (1687 / 2904) , surprised to find myself the only customer, in what was a decent sized venue.  Under these circs, you are looking to the staff  to help 'guide' you through your pub experience, and after some brief weather chat (she had a creaky old tree in her back garden and was worried it was going to fall on her house in these strong winds), she went to wrestle the toilet door, where the wedge to prop it open had actually jammed it shut.  I made a few sympathetic noises like "oooh", "aaah" and "eeee" and worried about my impending loo trip, but whatever she did seemed to work, and I didn't get stuck.  With a giant Magic Radio plasma now my only company, playing some of the worst 80's classics imaginable, I admired the pub for not going the full 'Hillier' on the micro concept of zero electronic devices (it'd actually have been a more depressing experience without it!)  My ale, Sleck Dust by Great Newsome, a nice steady one I'm well versed in thanks to my many Hull trips, was decent but not the best, felt like it needed turning over a bit more.  But that's difficult when you have no customers!


It wasn't a long walk into Parkgate for pub two, though the wind and rain was really whipping up a storm by now and with my new coat having a double zip (worst invention ever!) , it was hard to do it up and stay dry so I was sauntering behind this poor old man tugging at it furiously, and I think wondered what I was doing, poor bloke! 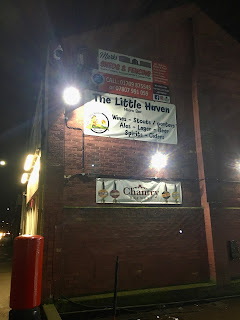 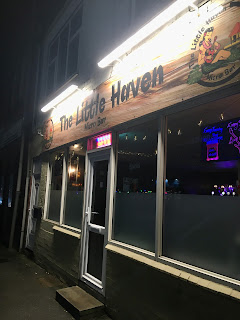 Such was the (superior, atmospheric) 'mood' lighting at the Little Haven, Parkgate (1688 / 2905) , I had a brief moment of panic as I wondered if we had a 'shut pub alert' on our hands.  I needn't have worried, I peered into the gloom and a healthy gaggle of locals were smiling up at me, a couple even said hello.  The lady behind the bar moved the two pumpclips so I could see them and asked me how I was on this fine evening!  With an Elvis mural and statue too, a typically well behaved greyhound, and some gents from Chantry talking about a new 'open to the public once a month' brewpub venture (definitely 'connoisseurs' if you know what I mean, cough cough St Helens, cough cough, just stolen a recent Martin Taylor joke cough cough), this was EASILY the best pub of the night.  What's more, she even kept me at the bar asking what I'd been up to today etc.  This is HOW micropubs should be.  Sadly though, when I mentioned GBG pub ticking, she basically told me we were ten a penny and she'd loads of 'tickers' in the last few months!  "Waaaah, I like to think I'm special and unique!" I protested.  "No" she replied.  Brutal.  Well, she'd been such a star, only BRAPA etiquette to let her do the green highlighting sponsored by Stabilo.  "How many other pub tickers have let you do this?" I asked her, mid-greening.  She told me none.  I felt vindicated, still the 'Special One'.  Then I spent ages wondering what a Cheese Beard was and why it cost £6.  And it took me ages to realise the entire menu was a joke!  Shame as a bottle of Slags for the train ride home seemed to be free of charge ...... 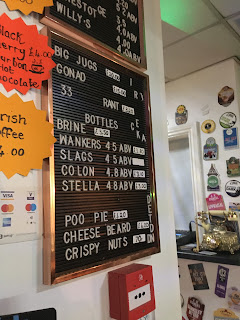 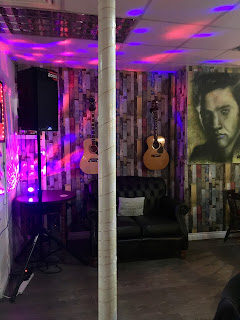 It was quite easy to pick up a bus back into 'The Interchange' which felt strangely cathedral-esque in the calming, near deserted Rotherham Thursday evening. 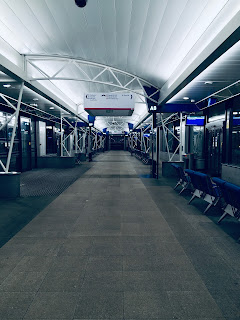 After a brief exchange with a hi-vis toilet attendant who was fuming because "THEY" were coming to expect the toilets but hadn't given him any notice, I managed to catch a bus to the 'Stag Roundabout' , home of BRAPA pub tick 'The Stag' just over two years ago.

Nowadays, they've shoehorned in a micropub into the tiny shopping precinct next door, which gave it both a 'Frotherblowers, Peterborough' outlook, and a 'South East London What Was the Point in That Then?' additional feeling ...... 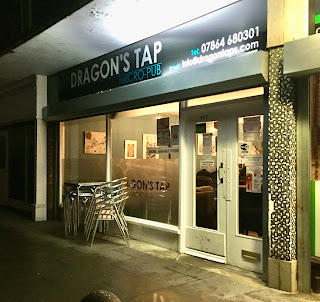 There was nothing wrong with the Dragon's Tap, Rotherham (1689 / 2906) as such, it just felt a bit clinical and lacking pzazz, and that was despite two happy groups of blokes, those at the door even said 'alreet' as I both entered and departed.  The barmaid seemed nice with all her 'luvs' and whatnot, but even then there was a sense of 'going through the motions' about the whole experience.  It seemed far too bright after the Little Haven.  But I actually spent a good ten minutes searching for my return bus ticket I thought I'd lost!  Let us blame the double zipper for also being quadruple pocketed.  My pub highlight was probably the mildly perilous unlockable single toilet, and the strange exotic 'sea-mist' effect generated by the tap.  Give it a try when you go, you are unlikely to be disappointed!   Good pint of Kaldo from the always reliable Chantry though, beer of the night, so there was that at least. 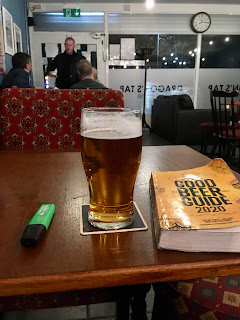 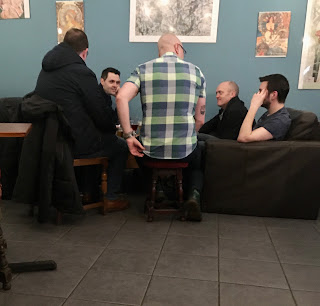 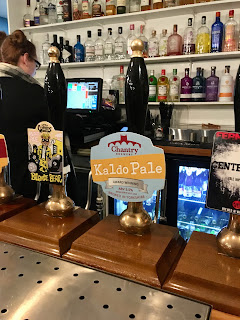 Drama next as I headed for the bus stop and it whizzed past me, a full FOUR minutes ahead of the schedule Google Maps reckoned.  I walked on to the next stop and a nervy but nice lady tells me the times aren't exact due to some strange time shift continuum thing that only exists in the Rotherham area.  Then she got me nervy by telling me it'd be a race against time to make my train connection, which was utter bullshit as we were back at the Interchange in about eight minutes, and I even had time for a half of ale in another low-key fave of mine, the Bridge Inn, with its budgie, crazy old leaky toilets, old men playing dominoes, friendly staff and football scarves galore.  A good tonic after three consecutive modern ones. 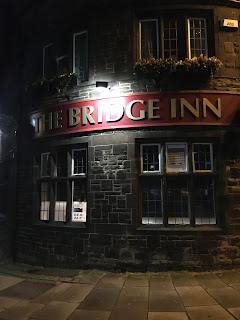 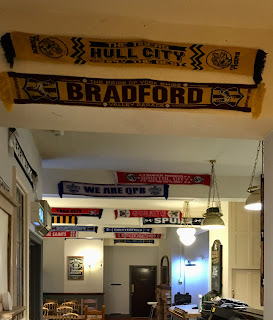 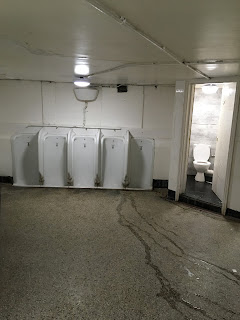 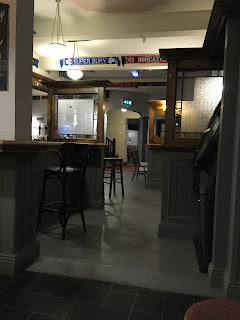 Despite nothing going really wrong transport wise, I still wasn't back home til 23:42 so it just shows how long everything takes, and after a quick MaccyD's and glass of juice, it was time for six hours sleep before work on Fri.  Phew!

Big Cumbrian weekend coming up with Father BRAPA playing a key role.  K/O 4pm Sat going right into Sunday.  So keep observing my progress on Twitter, and I'll be blogging about that early next week in two or three parts.