BRAPA : The Thing from Tring (Part 2)


So just to re-cap, it had been a tough start to the day.  Dagnall had been mean spirited, Aldbury a total let down, but at the King's Arms in Tring, I'd finally found reasons to be cheerful as somebody once sang.  Could the Castle (or was it Caaaaarstle?) live up to it?  The above picture tells you all you need to know, but here goes anyway. 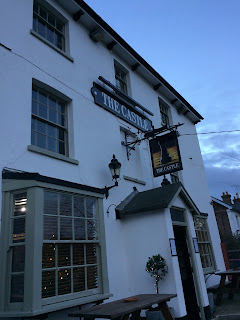 With the late fading already and no Hull City updates yet from Dad, I wandered in to find a very similar experience.  Two characterful blokes at the bar, but this pub was arguably even more welcoming than the King's Arms.  "You a Luton fan then?" says one guy, pushing me in the neck where my now famous orange scarf was wrapped around me.  "Nahhh, Hull City!" I said, almost proudly.  "'Ull, Ull, Ull" chants the guy and starts jigging around.  The more sedate man on the left glances over.  "You wouldn't know he was a secret millionaire who owns his own company would you?" he says to me.  I admit I wouldn't have picked it.  "And that's what is great about this pub ..." he continues, warming to his theme, "anyone can be anyone 'ere, it don't matter!" The barmaid seems lovely too, less impatient than the old one down the road, she tells me that if she had mince pies (she didn't), I'd definitely have been offered one.  We chat BRAPA, millionaires, and slag off almost every pub in Bucks and Herts between us.  It is perfect therapy.  "I've got a lifetime ban from the Red Lion at Dagnall" the secret millionaire proudly tells me, "bunch of inbred weirdos in there, very unfriendly place!" This is music to my ears after the morning I had.  They even agree the Valiant Trooper isn't so great, but tell me my next pub, the Robin Hood, is.  I think there's a link between here and there.  It was one of those "if you ask for so-and-so and say someone sent ya, and scratch your nose at right angles, you'll get a cheap taxi back to the station, save you that 40 min walk!" they tell me when I admit my six pub aim is in jeopardy.  I don't remember much about ale or pub other than I liked both, but it doesn't matter when the people are this good.

So Fullers then.  They always manage to sneak a pub into your day when you least expect it, never mind though cos I got a winter guest called "Wise Men".  A Hull City omen perhaps to get them through to full time, not cos of former player Scott Wiseman because Nick Barmby was once asked his favourite song.  He responded "Wisemen by Elvis".  Classic Barmbs.  I couldn't hack a third Tring experience like the last two, I was exhausted, and whilst this pub had a warm friendly air, it was less basic and rugged, a bit more demure, so random chatter perhaps didn't lend itself to the place quite so easily.  Having said that. two minutes after ordering my pint, I remembered I could get an ultra cheap efficient taxi to help me make up time, but needed to act quick.  Well, the barman was on it like a car bonnet, showing me the phone, letting me hear the call, and this was after a few locals all got involved and said if the timing was different, they'd ran me back.  WHY IS TRING SO FRIENDLY?  I'm honestly a bit in love with the place.  And here was me thinking it was just another town!   Hull City had conceded and were threatening to mess it up, as I perched in an alcove radiator thing with an old duffer, I didn't want to get dragged into dining central, someone might buy me a drink, kiss me or give me a tenner knowing Tring, it was like Dublin in July 2000 without the Corrs or Harp lager.  That's the best thing I can compare it to.  The taxi was here, my Wisemen had gone down a treat.


And the feel good factor continued as the the train was 2 mins delayed, meaning I got the connection to Euston easily, plus Hull City had won for 5th time since like ever, all against rubbish teams beginning with a B.  Hurrah!

I'd forgotten my Oyster, so my sixth pub had to be walkable from Euston / Kings Cross area.  I still had one to do in Bloomsbury.  I've been lucky recently with the "London Saturday night pubs".  We've had the Seven Stars at Chancery Lane, the Wenlock at Hoxton and the Calthorpe Arms at Bloomsbury, all good pubs.  Compare that to the 2016/17 shit-fest I encountered on a monthly basis.  Could this be another good one? 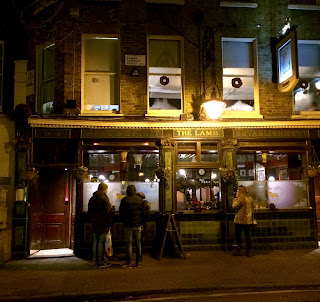 Had the staff not been so lackadaisical and served me in a timely manner on arrival (let's face it, despite the busy atmosphere, I was stood almost unchallenged with enough room to swing a twog), I'd have been able to grab the green corner bench seat and this could've been so different.  But by the time I finally had my disappointing pint of Redemption Blah Blah Blah in my hand, a guffawing bunch of cat women had taken the seat and I was left with what can only be described as one of longest fruitless 'tours' of any pub building to find a place to sit.  What a decent sized pub for London, I thought, as I went up the traditional narrow staircase to an upper room, thinking I'd struck gold, when a bearded Scottish wanker walks over and says "och aye, private party, sorry mate".  I paused, looked him in the eye, took an overly dramatic sip of my sub-standard ale.  He looked petrified thinking I was gonna protest / stand my ground, but then I finally said "ok, no problem" and walked off.  The Scots breathed a sigh of relief, cracked open the Special Brew, got out their thistle whistles and cranked up the Proclaimers to 11, and I walked downstairs disconsolately,  and wedged myself pathetically between a nice etched glass thing and what the GBG tells me is a working polyphon.  This place was suffering from the classic 'probably a lovely pub if it wasn't for the crowdedness'.

My beer had taken an age to drink, and I had to power through to make the train back from Kings Cross, which I did after slipping over a cobbled pavement slab straight onto my front teeth.  Ouch!  I looked like I'd had collagen implants all the way home!