I think it was Wednesday night last week when the 'Ghost of Christmas BRAP' visited me when the bell tolled 1am.  A judgey creature (like most ghosts, and Jesus), I'd been all set to go to East Yorkshire on the Saturday to finish the five remaining pubs I needed.

But the arguments he presented made me rethink.  Firstly, was it fair to ask Dad to step into his chauffeur boots on Christmas Saturday?  And secondly, I've already finished East Yorkshire pub ticking in full TWICE before, surely BRAPA had more pressing matters as per my 'strategy'?  He then started blathering on about micropubs and erosion, suggesting the new entry at Withernsea might be very short lived indeed.

So racked with guilt, I changed the venue to somewhere with a train and plenty of pubs in the GBG I'd never been to before.  It was in Lancashire so was going to be interesting: 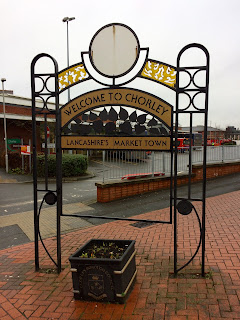 It was 10:45am and we found ourselves in the wonderful market place, fitting as it is a "market town".  The first pub opened 10am supposedly but where was it?  We wandered around the perimeter of the market, a brass band played Christmas Carols, and had it not be for the unseasonably mild weather, it could have been the most Christmassy I felt all week.

Dad eventually spied a sign .... the pub was INSIDE the market.  How quaint!  Maybe the 6pm closing time should've been a clue to me,  oh well, here we were ..... 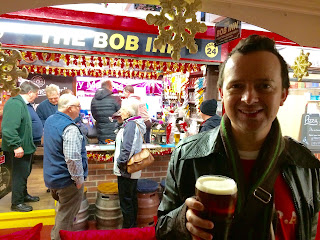 An open frontage, a bar inside full of comedic, jolly, sweaty Lancastrian men and a very engaged landlord (possibly actually called Bob from what I could hear) who gave us a run down of the beers - one of each style (light, dark and errm 'burgundy' - he wasn't even talking British passports ho ho) plus a cider - bang, bang, bang (no he didn't shoot us), £2.60, enjoy it my son! (he didn't actually say that either). Beer was top quality.  I'd spotted another 'unit' opposite also belonging to the Bob Inn done up in the style of a pub room - what joy.  Dad had to wrestle himself out of Lancs men clutches to join me, but has book wallpaper and a fire offering no heat ever been as acceptable as it was here?  Answer a resounding "no".  We settled down amongst the 1986 editions of Dandy, and my new friend, a "No 36 Higson's Fermentation Vessel" (it's amazing what you make friends with in Lancashire).   A plaque revealed this room was opened by "Russell Wilkins".  Didn't he play for Cambridge Utd in the 90's?  Then, the spirit of the season was summed up.  A young family came in.  The girl, by no means a twild, took a bite of her curly wurly, a sip of her Pepsi, and toasted her parents with "Merry Christmas!"  "I hope Santa brings you everything you want" replied her doting Dad, to which Mum rolled her eyes and said " I'm sure he will, he usually bloody does".  And that summed up this wonderful place.

Not far off the market place, it was 11:20am and our second pub had done what so many others have failed to do in 2017 and opened at the advertised pre 12 noon time.

Of the six pubs visited today, this was probably the most 'roughneck' boozer in that this was the one where our entrance caused most of a stir - so much so, one man kept walking across and staring at us, perhaps we were in his designated seat?  Still, it was warm and brilliant in a "twin peaksy" kind of way, I was absolutely in my element though the locals didn't quite reciprocate.  The beer Dad wanted had 'gone', the landlady telling us it'd been ultra busy last night.  In the circs, me declaring "good job I'm not a CAMRA inspector then!" didn't go down too well.  The local friendly Frankenstein perched at the bar didn't help, exclaiming "ALL THE BEERS HAVE GONE!" every few seconds, and laughing crazily, the landlady eventually snapping at him to stop exaggerating.   I tried again to quell the increasingly fraught atmosphere, saying that whilst I'd previously thought staying home on "mad Friday" and instead going out the following Saturday morning was a good idea, I hadn't accounted for the issue of beers going off.  Oops, this was too highbrow a concept for her or the locals to really support, and I shuffled off to a table wishing I'd never spoke.  Dad summed up my efforts ... "Right comment, wrong time, wrong place!"  A slippy toilet floor threatened to kill us, one of my favourite retro piped pub music bands (Eternal) played, and at £2.50 a pint, it made Bob look like a rip off!  We took our glasses back, I said thanks out of the side of my mouth, Friendly Frank shouted "ALL THE BEERS HAVE GONE!", patted me on the back, and we left.


Onwards and out of town-wards, where the 'far away' pub (only 10 mins from station at most but everything's relative in the pub haven that is Chorley) had just opened, past 12 noon and onto our third pub already and no 'Spoons - a BRAPA record? 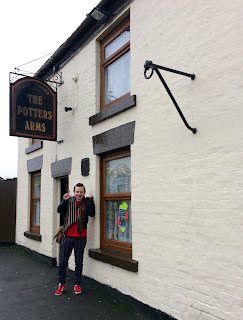 "Ey up, doesn't look too open!" said Dad squinting from across the road and about half a mile away!  He's had a bee in his bonnet this Christmas about pubs not being open which he's particularly looking forward to testing in Bolton on New Year's Day.  But it was very open, and once inside, a superb traditional old pub - mosaic flooring on entrance, vintage pictures of pub and town, a roaring fire, the sound of old men with life-threatening coughs playing dominoes, a jolly barmaid, hell even the Christmas decorations were tasteful.  It was like they were trying to tick all the BRAPA boxes, the beer was from Blackburn but don't let that put you off, that doesn't always mean it has entrails floating in it, £2.50 a pint again (sort it out Bob!) and as top quality a beer as you could hope to find.  I was telling Dad my strategy for getting people to buy me rounds for people who are a bit socially awkward, act as the spokesperson instead - the barmaid was loving it, and my joy at being able to use a £5 note to buy two pints.  Even when a little yapping dog appeared, I refused to grant it Twog status (the little shitwit was asking for it in fairness), such was my sense of pubby well being.


Halfway through my Chorley crawl and I was loving it, what a town!  Could things get better, or would it all go wrong?  Find out tomorrow as I edge ever closer to that magic 1200 mark.