BRAPA - Santa is a Merry Miller (A Festive Rotherham Tale)

After last Friday's successful trip to the Barnsley area, I didn't want Rotherham to feel neglected, so with just four South Yorkshire pubs left to 'tick' in the 2018 GBG, off I set from L**ds after work on another bitter Friday evening.

I'm quite enjoying this Friday 'ticking' lark as an alternative to Tuesday.  Plus points being (a) pubs are more likely to be open, lively & full of 'characters' (b) I get a good consecutive few days off the beer which must be better for mi' poor ole' liver, and (c) the early part of the week seems to go quicker, and the working week somehow feels less drawn out and painful.

So this could be a regular 'thing' in 2018, though I've stumbled into it kind of accidentally.

Rotherham Interchange was feeling harsh and threatening as I arrived, and after a coffee to keep me awake and a quick pee in a giant Tesco, I joined a queue of hardy looking weather beaten folk for the X1 bus going out east of centre.  The first pub was set back off the main road looking warm and welcoming ...... 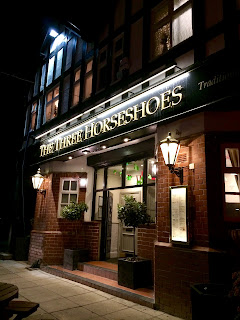 Of course, it is Christmas Party season and as i approached the bar, I was given the first dilemma of the night as a sign asked me "North Pole (left side) or South Pole (right side)?"  The North Pole had the guest ales, some bench seating, blokes, a twild, two women glowing by a fruit machine and the odd person eating their evening meal.  The South Pole had standard ales, Christmas decorations, a gaggle of blonde party ladies all dolled up for the evening, and two old blokes sneering at said decorations.  It felt a bit less 'pubby' but also a bit more 'real' which is quite a contradiction.  A blonde party lady smiled, necked her drink, then they all left.  This cleared the way to a quiet alcove seating the old blokes.  A barmaid had served me a pint of TT Landlord (good quality, SBS B) and a table was wiped for me.  Barmaid was on top form, offering me a choice of straight or handled glass, and a CAMRA discount - she can spot a CAMRA twat (Twamra) a mile off.   I like South Yorkshire, a very 'giving' part of the world, didn't even have to flash my card.  The rest of the staff wore black and white striped shirts like Newcastle fans, how unsavoury!  So I'd chosen South Pole and felt right at home, even if a few Xmas Jumper Wankers did edge their considerable arses into my space temporarily.  No-one wanted to sit down, despite available seating, like they'd somehow not be in the Christmas spirit if they did!  The two guys finally plucked up courage to ask what a boy like me was doing in a place like this, so I gave them the full BRAPA treatment and they rolled their eyes when I said I didn't dislike this place!  They told me the next pub also offered a discount and it was 'not bad' (a ringing endorsement from this duo I reckon).

Luckily, there was a subway underpass thing to get across the main road, and the bus turned up a few mins delayed to ferry me down t'road to Broom, which comes under Rotherham itself in the GBG as it is a bit nearer town.  The outlook of the pub was fairly similar to before, just on a roundabout too for added peril.

I confidently strode up to the pub and said 'ow do to the three wise men you see lurking in the doorway.  I was feeling like a proper South Yorks boss by now, buoyed by the last pub experience, if only I'd worn my string vest, got a crew cut, brought my whippet, hand-me-down-toothbrush and ordered a pint of Stones, I'd have been living the dream.  Sadly, the cute brunette barmaid was equally quick to identify me as a Twamra, mainly cos I didn't use the favoured buzz phrase "pint o' Carling luv", so I pre-empted the 'CAMRA discount' question and soon we were chatting on the Three Horseshoes, to which she scowled and said "ugh, it's like Ramsey's Kitchen Nightmares in there, I'm poaching all their staff!" which was both cryptic and potentially sinister enough to leave me puzzled.  In fact, over the course of the evening, a few people said "Three Horseshoes?  That's the one still doing food isn't it?" as though food in pubs is soooo last century.  I WISH!  Our brunette whippersnapper was now on the other side of the bar cleaning tables, noting my confused expression as half the pub was in darkness and reserved.  "A band are playing, but they are half an hour late!" she explained, so I sat in a bravely high octane seat close to the bar and admired the same tacky Christmas decorations they'd had in the last pub.  It soon looked like I'd sat there purposefully to watch the football as Sheff Wed v Wolves appeared in my eyeline.  A rumbustious Sheff Utd fan sat down with me, and reckoned he'd rather watch his side lose 2-3 and play entertaining football than win 1-0 and be dull.  I don't expect Sheff Utd fans to act like real human beings, but this just felt wrong.  As I got the GBG and green highlighter out, a nice man called Richard stood behind us was like "you BRAPA innit?!" (to paraphrase him) and said he follows me on Twitter which is nice.  He was a Sheff Wed fan the poor thing, as Wolves were looking a class above already, but I had a bus to dash for, the band I noticed were finally setting up but the entire pub seemed to give zero shits, perhaps this changed later on.....

The bus turned up late again, and though I vaguely flirted with the idea of getting a bus out to Kimberworth for another tick, I decided to rest with a half (best beer of the night) in the wonderfully underrated Bridge with it's excellent landlord, locals and amazing drippy toilets.  How this isn't in the GBG this year and the Rhinoceros is, well Rotherham CAMRA must know something I don't!

'Twas a good night and I got mi sen back to York via L**ds ready for Saturday's trip up to Tyneside.