I was STILL all "beered out" as I took the train over them dark hills to the west of lovely superior Yorkshire.

And now I've lost half my readership, we'll continue and all felt a bit like a replication of Aston/Nantwich/Crewe day early on, what with changes at Manchester Piccadilly and Crewe, and the little one carriage train south, minus the lovely Justyna and Lucy of course (oh, and the even lovelier Tom obviously!)

Whitchurch isn't in Cheshire, which may not be "revelation of the year" to those of you with UK geographical knowledge, but it seemed a sensible base as I could get a 15-20 minute bus ride to Audlem.

I walked through Whitchurch, a friendly place with only that slight "almost Welsh" feel, I guess you'd say the locals had 5.5 fingers on each hand.  The "bus station" was actually part of Tesco car park, so when my bus didn't show, paranoia kicked in and I started searching for actual "bus stations" but I was in the right place, and me and one old lady who appeared from nowhere with an air of the "what of it" hopped aboard.

Confusingly, we passed a Combermere Arms but I hung on til we reached Audlem Square, and I saw the pub across the road .....

But perhaps a bit of a "wolf in sheep's clothing" of a pub, for when I went in, I was immediately hit with modernity, and worse, a woman smiling up at me from a low leather sofa flanked by two kids and a dog (note I'm being open minded and not declaring them twilds or twogs yet).  Beyond the bar, I heard a Mum placating a definite Twild (waah waah waah), by asking if his toy was a friendly frog.  No one ever answered this conundrum.  A panicky old woman's husband materialised from the shiny wood panelled floor and was told "I got you a coke, did i do the right thing??"  He didn't reply either.  I gave a nice shoulderless brunette barmaid the exact change, did this make me more attractive to her?  Another unanswered question.    If this was becoming a theme of the pub, so was antiques.  Bargain Hunt was on above me, and the pub was hosting it's own version of Antiques Roadshow.  A cynic might say they are auctioning off all the proper pub furniture and memorabilia now it has gone down the 'half trendy diners' route, but TBH I didn't have the energy to dislike this place.  But the signs were there, when smiley woman left, a barmaid was out within seconds disinfecting the table.  I hate Wetherspoons sticky crumb tables, but there ARE limits.  The staff were nice though, as were the few old men, one of whom apologised for having Shropshire Gold instead of the "exciting guest" (which I wasn't massively enjoying as it tasted like Toilet Duck.  Pine fresh).   The biggest dog EVER walked in, you could feel it breathing from across the pub - but am not sure the barmaid (who boasted she was off to Leamington Spa shortly, impressing nobody) calling it "a beast" was a compliment or not.  Okay pub all in all, but expected just a little bit more.


After a bit of confusion about where the bus would actually stop to take me back (the local bike shop weren't much help), it did what I wanted it to do and soon we were chugging back to Whitchurch with some great effort.  I was a bit torn, could I be arsed doing Whitchurch.  Three easy pubs but wasn't in the mood, so decided I'd leave it to fate and see if anyone "alighted" at the station.

They didn't.  So I was soon back at Tesco and took this as I sign to sample at least one pub.

GBG Boring Stat of the day ..... This would prove to be my first Shropshire 'tick' since I watched a World Cup game with some mad locals in Shrewsbury's excellent Woodman pub over 3 years ago - I actually had a few pints and convinced myself the ghost of the landlady who died in a 1923 fire and haunts the pub was sat right beside me.  The pub is still in GBG today so was a good tick to get.

"This was more like it, nice way to bring up a mini-landmark"  I thought as I ambled in slowly admiring the typical Joule's stained glass - though I think the Glebe in Stoke and the Cross Keys in Chester (where I fell asleep, in my pint of Slumbering Monk no less) are my only previous experiences of the 'chain'.  I'd thought their "enter as strangers, leave as friends" strapline was a bit risky (don't make promises you can't keep) but almost immediately, a chirpy grey haired and grey skinned old local was asking me BRAPA related questions and the personable young bar lad (who looked like every guy off Emmerdale and Coronation St in a blender) was joining in, and true, I was making friends!   The pub had outdoor loos, another sure-fire sign of quality, but I didn't wanna push my luck, so sat in the front bar, smiling briefly at the wife of 'knee support Brian Butterfield'.  A dog jumped up at me like a little mad bastard, but I even liked that, and didn't whisper twog in it's ear once.  I stared around wide-eyed like a proper pub tourist, but drama came in proper human form when a nice young barmaid with an element of Willow from Neighbours (but older obvs), was made to go out and buy some chips.  5 mins later, she returned, Iceland didn't have any (what?!) so she went to Tesco.    15 mins later, she came back traumatised, she'd got some, but the shopping bag burst and the chips went right through them.  Poor girl was having a bad time of it, and I went before the inevitable tears followed..... perhaps.  Lovely pub.


Despite this great experience, it didn't push me to do the other two, and there was a direct train to Manc shortly so I walked up the road, and got it.  It stopped at Wilmslow where I needed two ticks, "hmmm sounds like a proper traditional old Cheshire town" I thought, uh oh! 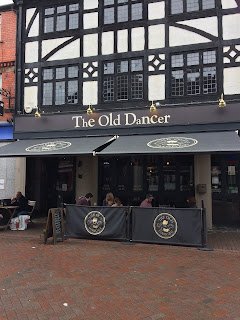 A little taste of Chorlton-cum-Hardy had arrived in Wilmslow, even down to posers sitting outside despite the chilly wind and light rain.  "We're having fun out here, honest!"  they shivered, praying the staff would bring them blankets.  Inside was buggy heaven (if you like babies, young mothers and buggies that is), their wideness not designed for a small continental style bar like this (the buggies, not the mothers!)   I couldn't see a staff member serving, but two black shirted dim wits who were members of staff but not "on duty" due to shovelling food into their faces, stared at me, but didn't ask anyone to serve me.  Poor show.  I took my hopelessly appropriate Tiny Rebel ale (v.good quality btw) to a table between twild groups under a mural of "Old Dancers".  The Clash played to help my mood, then Morrissey (which predictive text changes to "mortuary" on my phone) seemed more in-keeping with the atmos.   When "Enjoy Yourself" came on, I knew the playlist was taking the piss.  At least female black shirt dimwit finished her food and smiled and said "hi", cos no one else did.   The lazy eyed blonde Keeley Donovan did a job, but lacked charisma.  A Mum thanked me as I moved my legs, before a buggy could sever them clean off.  The toilets were confusing called the Urinoirs, which may be french for "Black Piss", which you may get if you have a 12 hr sesh in here. 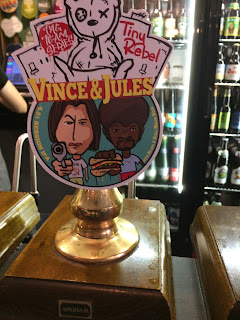 A few mins walk down the road, I found the other Wilmslow pub and as soon as I saw the italic text looming on the horizon, I had a feeling I'd be thinking "that Old Dancer wasn't such a bad place really" in a few minutes time ...... 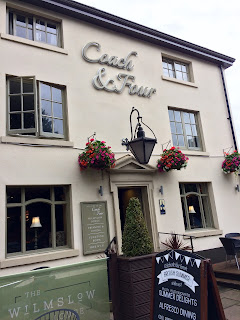 So, here's a question, in pub-terms, what is more depressing than an Ember Inn?  I'll tell you, a pub that isn't an Ember Inn but ticks so many boxes on the Ember bingo card, that it may as well be.  Snooty middle class diners with superiority complex?  Check.  Piles of logs serving no purpose?  Check!  Young families studying menus bigger than their children?  Check.  Cluttered sticky table? Check!  Oh well, a few highlights I can report.  I couldn't really pronounce my ale - "Willamette Pale" or something, so made a joke of it and barman found it hilarious!!  I wasn't even trying.  What a dude.  Secondly, I was gobsmacked at the bar to see the mystery beer (Solstice Amber) I had in Truro's Rising Sun here too.  What?  I'd presumed it was a Cornish microbrewery ale.  But a closer look at the pumpclip told me it was brewed in Manchester's "Media City".  I figured out it was a HYDES beer all along, confirmed literally minutes later by someone on my Twitter!  So the whole "14 consecutive Cornish ales" etc had all been a lie!  That then led me to the question, "was this a Hydes pub?"  Surely not.  Not after Fletcher Moss in Didsbury.  It can't be.  It even made Q in Stalybridge look like the Anchor Anchor did this boring hell-hole.  I faced an old couple doing the crossword together which was quite sweet and lightened my mood as I failed to get told off for using the disabled bogs despite my best effort.  The old gent wore full maroon, which I very approve of.  I guess you could call it a "Somerset CCC Playsuit".  Lovely effort.  A good last thing to witness before I left.

Back on the train to Manc, of course I could've got off at Stockport but it'd be wrong to go to such a good ale town (wouldn't it Mudgie?) if I wasn't feeling on top pub drinking form?

So I got a huge coffee, and was on the train back to York by 6pm.  I felt like I was kind of rebelling.  Against who exactly, I don't know, but I could hear Tom's voice in my head (never a good sign) saying "Si, you could easily have whipped in six pubs today, I'm very disappointed".  And that pleased me.  Liberating, I don't have to push myself every bloody time.  Stupid BRAPA.

So, I need a break and I'll get a break, I thought last Saturday.  Uncle Roger funeral midweek so would there be chance for any Great Yarmouth ticking?  Stay tuned.  And if not, I'll be back to review Saturday 22nd trip to Buckinghamshire, probably my last time there before the 2018 GBG comes out.

Have a good un,