As the plane touched down (well, smashed onto the runway with a crunch and a puff of smoke), I was still glad I'd made the decision to fly rather than 'train it'.  £59 return, 1.5 hour flight, total no brainer!

The man sitting next to me had been a legend, a lovely chap from Great Ayton near Middlesbrough whose family were visiting the UK from Qatar, couldn't be arsed to meet him up north, so they compromised on meeting at St Mabyn, a BRAPA friendly village near Wadebridge.  Logical of course!

The weather was glorious as I arrived in this strange new BRAPA land, Cornwall, a bit apprehensive as to whether the inhabitants were like, humans, but no chance to find that out yet as I hopped aboard the bus to Newquay and sat next to a West Indian lady from L**ds called Carol.  We had some nice un-challenging chats we could agree on - (a) the views at Mawgan Porth are nicer than those in the Merrion Centre and (b) it will either rain tomorrow, or it will be dry.

I located my Travelodge (one of the worst I've ever stayed in for heat and meanness of facilities), and after checking in, realised it was still early enough to blow some of my 'emergency taxi fund' on something outlandish.

Surprise, surprise, my taxi driver was from L**ds too, hadn't heard of Bolingey, had no Sat Nav, so we had an amusing drive out west, talking about things like the Yorkshire Bank and pub ticking.  Finally, we made it to my 1st of 25 holiday pubs, the kind of village that when a taxi pulls up, the curtains twitch, but not when it is everyone's birthday ..... 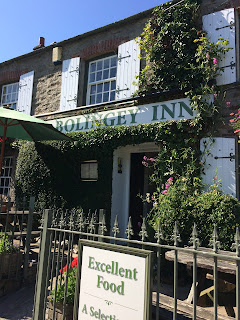 I said 'hi' to an unresponsive older couple (perhaps corpses) enjoying the sun outside, and wandered in to find a cosy old wooden bar room jam-packed with folk, in the midst of celebrating someone's birthday - I knew this because I later heard a caterwauling rendition of "happy birthday" plus random village locals kept arriving with little gift bags like Cornish three wise men.  The ales on were standards, so perfect chance to try a "Doom Bar" in Cornwall itself, something I promised myself I'd do.   I took it outside and sat at a bench, and enjoyed this Doom Bar more than any other before!  Probably psychological ,  and probably because it's the first pint of an already long, hot day, but great nonetheless.  I was soon aware of Bolingey's answer to Stacey Slater, stood to my right, talking shadily into a mobile phone.  Before I could blink, a group had joined me at my bench and were wishing the older woman happy birthday.  Had she left the indoor party to sit out here?  A bit rude, I thought.  Alas, no, this was a different woman's birthday!  Confused I was.  Then Stacey Slater reappeared to give her Mum (as it turned out) a prezzie.  Mum was upset one of the lads had ordered her a pint of beer "do you know how fattening beer is?  I've not touched it for weeks!" she wailed.  I commented walking from pub to pub keeps the pounds off, little did I know how difficult walking from pub to pub would be in Cornwall!  The younger bloke, who'd now bought her something slimming like "gin", told me to 'not give up my ground' with my bench, a bit difficult as I'd already been invaded, so I told him as a visitor, I knew my place in the pecking order.  An awkward silence followed (nothing I said was helping!), made worse when S.Slater was told to scoot up the bench but said it was tricky in her short skirt, she didn't want people looking at her knickers.  She could only have meant me (as I'm sure incest is a myth in Cornwall) so I had to avert my eyes in an overly deliberate manner, before wishing Mummy Slater (not Mo) a happy birthday in a mumbled way, before making a hasty retreat, relieved to be out of the awkward situation! 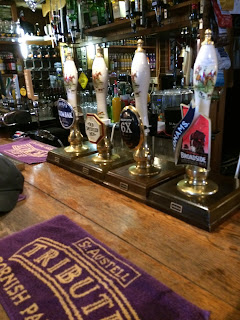 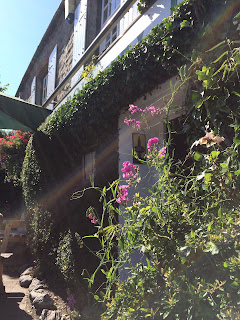 Despite the tricky experience, it was nice psychologically to get a 'difficult' tick under my belt early doors.  Another main reason for doing it was a straightforward walk into Perranporth, which had another GBG pub and transport links.  I took it for granted, but it was one of the few pub walks I managed without the threat of being killed, as the roads are so narrow, and there are no grass verges, it is just not a pedestrian friendly county, it even makes North Yorks look acceptable!

Perranporth was a hive of tourist activity, not surprising being a fairly pretty coastal resort with lots of men climbing out of the sea, twilds with buckets and spades, and Mums walking annoyingly slowly like the type of people who aren't on a pub mission, which I don't suppose they are.  I found the next pub, pretty much on the beach .....

I walked through firstly a confusing hotel entrance area, and then a conservatory where everybody was, because it had views onto the beach, into a dark long thin bar where the modern day version of Shakespeare's Sister looked at me sullenly.  I ordered an amazing stout from the Midlands called Peaky Blinder, yet this would prove to be one of my only non-Cornish beers of the holiday, I'm glad to say.  I thought the standard of pub over my stay was really high, beer fantastic too, but this pub just didn't inspire.  I nearly got mowed down by a surfer version of Toadfish who watched an overly long BBC News piece about a Panda, maybe he thought it was one of his species.  I sat indoors under speakers pumping out some shitty chart music, the occasional gloomy tourist came in and ordered food, and though I tried to smile, no-one reciprocated so the only moral victory I could manage was eating a sly cheese & onion pasty (the sequel to the one in Didsbury's Fletcher Moss the day before) without getting caught!

Luckily my L**ds taxi driver had hung around long enough to take me back to Newquay.  After all the palarva getting here, I felt a bit miserable having to admit neither pub experience had been that great!  But am sure Newquay had plenty to offer pub wise, didn't it?  He plonked me outside my third pub of the holiday ..... 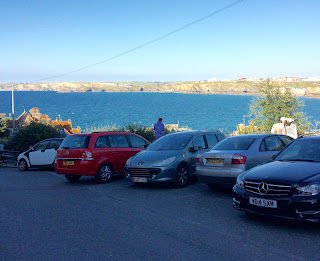 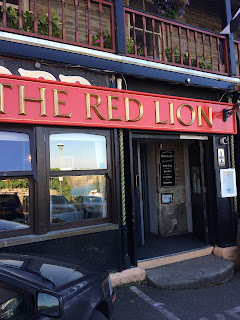 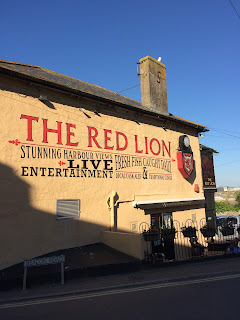 "Stunning harbour views" seemed to be the main selling point here, and I sure enough noticed the entire front of the pub like some viewing gantry, everyone swivelled round on these little seats just drinking and craning their necks to stare mournfully out into the ocean.  The rest of the pub was almost empty, but the staff were at least friendly in a cutesie kind of way so I ordered some ale with Cliff Thorburn surfing on the front, that MUST be the right one to drink.  Quite a bizarre atmosphere really, as I wrestled with a circular posing table, a woman with a northern accent (so probably from L**ds) argued with her man-friend about where they were going to sit.  I spied an outdoor seating area behind the pub, hurrah, and suddenly I felt alive, in amongst the hustle and bustle of locals.  There was a tin mining version of Sting, an odd mural of a lion (even worse than the Albert & the Lion 'Spoons in Blackpool), a twild who was suspicious of my pub photographing, her Mum who couldn't sit still for 2 seconds, a wheezy joker on the left, and that general feeling that those sat at the front looking at the sea were actually missing the true encapsulation of the pub.  So all in all, pub of day one! 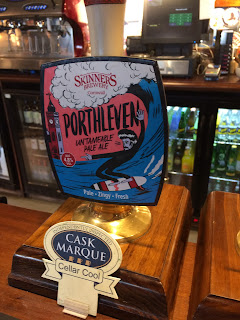 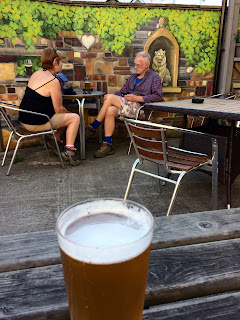 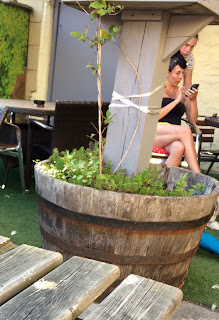 Then things got really bizarre as Neil from work, also on holiday down here, shouted me over to meet his wife and twild-folk in their little holiday home (more people from L**ds!) , warning them of the 'weird drunken man', before I also spied where my sister's cat has been disappearing to on summer evenings, yes he's opened a nightclub in Newquay ..... 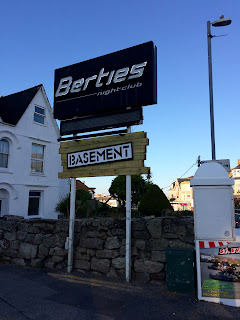 Time for the final pub of the evening, my only Wetherspoons of the holiday.  I could even see it from my hotel window ..... 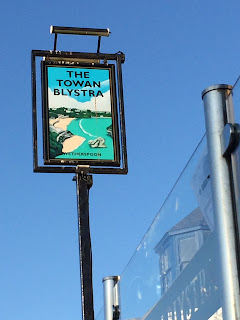 So, Towan Blystra was what Newquay was called before tourist scum like me invaded the town.  I still had my wits about me enough to utilise a "Mudgie Voucher" to claim my 50p off, remembering we were now in July so I was on a new batch.  This was pretty standard 'Spoons like so many are, staff looked a bit dishevelled and weary, the carpet was full of excitement, a teenage were-rabbit made her long suffering Mum buy her a drink which seemed to be half pepsi, half guinness, not sure if that even has a name, and probably (sadly) doesn't exist!  But I might try it one day.  An impatient man across from me ordered food with a sense of urgency like I've never seen before in a serene 'Spoons environment, and when he ate it, it's fair to say he inhaled it Man v Food style.  Two old blokes got animated about a third, unseen man they didn't get on with.  It ended in one of them, during a lull in conversation, declaring "and I'll snap him like a parsnip after Christmas!" which seemed poetically violent. 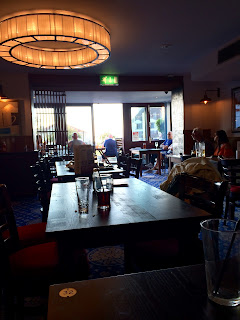 So that was a tricky day one of my Cornwall pub tour.  Glad to get 4 newbies under the belt, certainly things would improve on all 5 of the subsequent pub ticking days, but for now, it was time to enjoy the sunset, cope with my boiling hot Travelodge room, and get organised for tomorrow morning as we trek down to Penzance! 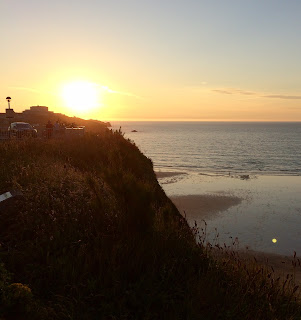