After a predictably muggy night, I woke at 8am and got organised for the day ahead, which was a nice little breakfast routine I got into of draping all my maps, books devices etc. over my bed, in amongst coffee, juice, bananas and weird little pastry things, bought from the adjoining Aldi (the only supermarket I've ever been to which sells wet suits for twilds but not single packets of crisps).

I'd already decided that staying in Newquay, I should really be focusing on the pubs in mid-Cornwall, as train travel always involves a change at Par, a long enough journey as it was.

However, from my initial plans back in January, I'd had my heart set on the very western tip of the county, as it looked adventurous, so off I set on my "Ride Cornwall" ticket (£13 day ticket to use on any train or bus - thanks Tom for the tip!)

Nearly 4 hours later, after a change at Par and a telling off at Penzance bus station for eating my sandwich in the not yet opened bus station,  I got a coastal bus, I was finally in the quiet little village of Trewallard.  2pm, another warm day, needed a pint ......

I walked into this nice cool, dark, narrow old pub to find a matronly landlady telling her disinterested daughter (DD), playing with her iPhone at the bar, to make herself useful and make sure "table 4" outside are enjoying their food.  DD sighed, rolled her eyes, and loped outside like a wombat that can't be arsed with life.  Landlady shook her head as if to say "kids" and served me this refreshing ale from some local micro-brewery.  I went outside, where all the action was, and three local pub men (one reminded me of a rugged Paddy McGuinness - fave phrase probably "let the handpump see the alcove") nodded and said "hi" in some strange dialect - or not.  Our disinterested daughter (pronouncing lasagne "laaarsaaarghhhnyaar") was now attending to what appeared to be a Spanish family, although Dad had the air of a Proclaimer, and ordered a mug of prawns, they watched a sparrow having a dust bath and found it very amusing.  It wasn't.  In fact, I was feeling a bit gloomy as my plan was to walk between the next two pubs, but bus journey showed me how hazardous that would be so I'd have to wait an hour for a bus each time.  Time to snap myself out of it, these were "once in a lifetime pubs", the weather was nice, I was on holiday, stop being a miseryguts!  Anyway, if Proclaimer Dad was having a mug of prawns, I was gonna smuggle my own Aldi Prawn Sandwich so there!  A dog that looked like it was on heroin appeared, I took a photo on the sly cos Pub Curmudgeon wondered if the pub had a Wellard dog like Eastenders did.  I went back in for a half, I told them I couldn't see my own change, coming into the dark from the light outside, it wasn't "pub bantz" that impressed landlady or DD.  A "Camel Creek Adventure Park" van pulled up, the way the locals reacted was it's the most exciting thing ever seen in Trewellard!

After a chat at the bus stop (gap in a hedge) with some excitable teenage dude, the bus did actually arrive on time and about 4 minutes later, I'd pulled up outside the next pub, two villages down from Trewellard.....

A group of locals surrounded the bar area, and when the old-skool landlady accidentally charged me 30p more, everyone started claiming visitors got charged more than locals, and sometimes, that's all it takes, and you are part of the group!  I hovered on a stool and explained BRAPA, but not before someone commented on a missing pub regular "she's lost her Grandad!"  "Oh, that's really sad" I said, but they were all laughing, harsh bastards!   But she'd actually mislaid him, he wasn't dead!  Well how was I to know?  The sceptical barmaid asked how I could be sure the 4,500 pubs in the GBG were the 4,500 best pubs in the country?  Well, all I could say was it's just a 'guide' and it changes every year to keep up to date.  All but one of the regulars left, leaving me awkwardly perched on a stool next to the man I'd been talking to most, but now in silence.  He went to smoke, I went to the loo, and then to sit "far away".  I realised this pub had "George, Cullingworth" syndrome in that EVERY table apart from one by the door had reserved signs and knives and forks out.  Two couples came in, firstly two northerners "we're only here cos we took the wrong footpath, I need a pint!" and two jolly scousers, both commented on the "nowhere to sit indoors" factor.  The landlady assured them they were "fully booked up this evening", but the visitors looked as unconvinced as me.  Really?  Every table?  It wasn't a tiny pub.  A moody looking school aged daughter returned, sighed, banged a door, stomped upstairs (I can see a pattern forming) and I edged outside, careful to avoid eye -contact with the smoker, and waited patiently for the delayed bus.

A few minutes later, I was in St Just (which people kept pronouncing St Joost which I'm not sure is right), a little bit further south, to a pub which that smoker in the last pub had called "a proper drinkers pub" and "oooh, some of the language they use in there is awful" so I had high hopes! 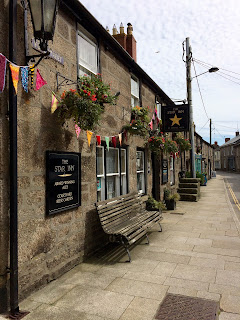 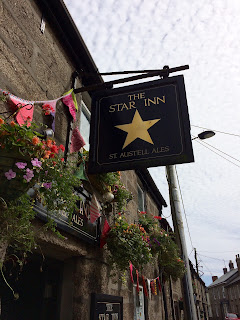 So, here it was, pub of the holiday so far.  One of those delicious dark nautical places that is in your mind's eye when you are thinking about Cornish coastal pubs, and am glad to say, it wouldn't be the last.  Re the so called bad language I was warned about, the worst I heard was something pointing an accusing bony finger into the face of a posh man and saying "are you a Fulham fan then?"  The pub stopped in disbelief, but he got out of it by turning it into a pub related response, "oh yes, but mainly so I could go to this wonderful pub called the Bricklayers Arms."  Was he meaning that hit & miss overpriced thing near Putney Bridge?  Surely he must be.  A woman left, and a Cornish Jizzard (my new term for a Cornwall pub goer who seems a bit annoying) gargled "will I find you doing the washing up later?"  The pub laughed hysterically, wheezily, I didn't get it, surely if you said this in an Islington pub in 2017, you'd get barred.  Then an American lady with a big mouth (no comment) came in and said "I wanna Bath Gem .... in a bigger glass!"  (It's called a pint).  This didn't stop her from sitting at the bar, taking up three stools if I'm being rude, and commenting "are trout indigenous to the UK?"  Well that was it - the locals loved her after that, and a lesson for me in how to do pub banter that people appreciate in this neck of the woods.   Wonderful pub. 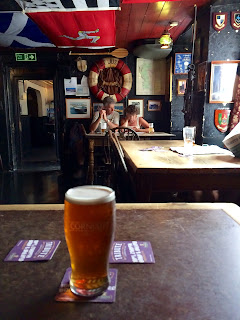 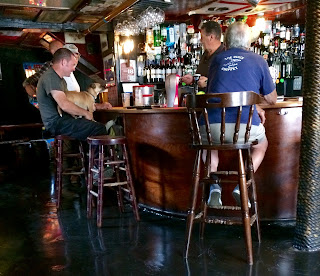 Buoyed by this wonderful experience, I went back to St Just's  "bus station" (a bit of tarmac with a turning circle, some public loos, and a lost Chinese family) and when a minibus pulled up, I felt a bit stupid but asked the lass driving it if she was heading for Penzance.

I thought she'd laugh in my face, but she was, and soon a load of surfer tourist kids joined me and I felt like I was in the Scooby Doo van, especially as we started travelling down this crazy country lanes, certainly this wasn't the official bus route.

Before I could even say "zoiks", we were back in Penzance quicker than I could've ever imagined so I trotted down a couple of narrow streets to the next pub.   Now I'd not done my research, but the location and size from the outside had me imagining some delightful untouched creaking gem, so I was in for a bit of a surprise ...... 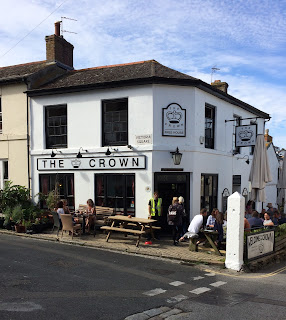 It was a very lively and eclectic atmosphere outside, after work people / tourists / unemployed / old people enjoying the evening sun, and quite fraught inside as I was served by Claire, our blonde barmaid for the evening who was having "one of those days".  As she served me a "One Hop Grain" ale by their seemingly own Crown brewery, she remarked to the jolly old bloke (who'd already chatted to me) that "all the fuckwits are out today .... they've looked up my shift times and thought, we'll come down and annoy Claire".  She sounded a tiny bit paranoid but I couldn't let this slide, midway through pulling my pint.  "I hope I'm not a fuckwit." I said, she replied with admirable honesty "well, we'll have to wait and see".  I sat on a bench to the right of the bar, almost adjoining it, enjoyed my pint, giving Claire the chance to see I wasn't too much of a fuckwit.  There was a nice snug looking room around the back, deserted, I should really have gone in there.  But that'd have been boring, as person after person came in making Claire's day worse with over-hyped nonsense like "it's all kicking off out there!"  before qualifying it with "no, it's calming down actually, just a few people wanting food".  It wasn't helping poor Claire's heart rate, who'd been harassed by some bloke who refused to leave and then hassled everyone sat outside.  But surely he wasn't the only fuckwit?  A man called Bill threatened / volunteered to sort out anyone behaving badly, he was told "oi, just leave it!"  in a line straight out of Eastenders.  It was almost easy to avoid the pub interior, it looked like a Polish 1970's Eurovision entrant had collaborated with the owners of the Dog & Partridge in Yateley and said "how can we piss off lovers of traditional pub interiors?"  Truly, a unique and amusing experience if perhaps not the best pub in Cornwall.  The pictures tell my story better .....


So it took a bit of "getting into" did my first full day in Cornwall, disappointed to only manage 4 ticks (I still didn't get back to Newquay til after 9pm), a lesson learned that tomorrow needed to be a bit less outlandish as I need to go for the full six pub quota.  In fact, Friday would prove to be my favourite day of the holiday so stay tuned for that write up.