The most noteworthy moment of the 17:09 train journey between Leeds and Manchester Piccadilly occurred when a blotchy faced student girl hopped on at Huddersfield with a cello, and proceeded to blub her way through to Manchester surrounded by unsympathetic jokey businessmen.

She still managed to recover herself enough to proudly tell a mischievous  Asian twild "it's a Cello, like a big guitar!" and the same to the businessmen, with added "...I've just graduated" so why so upset?  It wasn't her student debt, £60,000 she reckoned (WHATTTT?)  in one of her cheerier moments, but it's okay said the businessmen, "if you vote Corbyn, he'll wipe it our for you!"  She looked skeptical and started sobbing again and went to the loo, we'd only reached Marsden by this point.  Longest journey ever!

Maybe it was an omen, for once I landed in Manchester, rail chaos reigned as we heard about someone 'throwing themselves under a train at Bramhall' as the guard delicately put it.  Sad times, perhaps he/she mistook it for Bramall Lane, perhaps he/she realised there weren't any GBG pubs in Bramhall.

Upshot of it was the train wasn't going any further than Stockport, I'd need a replacement bus.  Well, it was already going to be a very late do, so I abandoned the whole idea.  Luckily, I have a contingency plan for such Manchester moments ("always expect to be let down in Manchester, you might be pleasantly surprised" is a decent life motto), and this plan B means getting something done on the Metro.

So before long, I was back in sunny Media City, where I'd lurked at 10:30am in April 2016 only to be told rather abruptly that they weren't opening til after 12 noon due to a party the night before, and I then offended the Mum of the party boy (trying to recover his fave scarf no less, what kinda party was this ?!) by asking whether Lymm was in Greater Manchester.  She walked off with her nose in the air, no scarf, but a better understanding of BRAPA. 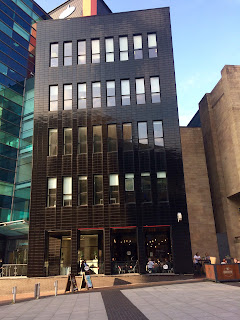 It was a novel feeling to walk inside, not something you take for granted when you've waited outside for 45 minutes with no happy outcome.  A proper barman of some integrity, for such a suspect looking establishment, served me some very nice Brightside bitter, though he must've rang Hambleden's Stag & Huntsman and said "Si's here, what glassware do you recommend to annoy him?" because I ended up with something scarily similar, hard to hold and horrid.  A beermat appeared, but it was an "under the counter" one, used merely for mopping the spillage, almost as though drip trays have never seen the light of day in Media City.  I sat in a comfy green armchair (hopelessly non pubby) by the door under an L.S. Lowry mural.  I didn't need Fiona Bruce, Philip Mould or potential #pubman Bendor Grosvenor to tell me this was 'fake' not 'fortune' but was still nice.  Across from me were a group of about 15 young media types you may expect in such a place, "airbrushed cyber pricks" if you'll allow me to use a "The Thick of It" expression.  At least those directly opposite seemed a bit more human,  the white topped blonde girl even smiled, and one cool dude did his best to clash with the wall behind him, on account of hairstyle and shirt.   The nervy intense"genius" bloke kept putting his hands over his ears whenever one of the girls spoke.  I couldn't hear what was happening sadly, poor acoustics due to high ceiling, but his reaction suggested it wasn't worth the bother.  Despite myself, I actually relaxed into enjoying this place, helped by the ale and comfort, and yes, easy for BRAPA idiots (i.e. me)  to sneer but this is a place I could get on board with if someone castrated me and confiscated my Good Beer Guide.

Train journey back was a ball-ache but I'd taken satisfaction from 'thinking on my feet' when I needed to.  Initial thought had been "go to Stockport" but I feel like with such pub royalty there, I kind of have to announce it 24 hrs in advance (well, apart from when I did Armoury and Old Vic off the cuff).
Where to next midweek then? (Which might actually be Monday due to Punk Festival packing, a dangerous day to pub tick, gulp).  Well, yesterday taught me that if finishing at 5pm rather than 4pm, further flung Cheshire-esque ticks are unwise so try and think more "outer Manchester".  That'll be in my mind.  Perhaps something beginning with a C, D or E.

Exciting times on the horizon anyway.  The BRAPA 2017/18 kits will be revealed soon which I'm happy about even if no one else cares.

Saturday is going to be fun, again Dad's chauffeur skills have been put on hold (taking pity on him after all that Great Yarmouth back n forth) as we go to a mystery train location.  I have 5 or 6 pubs in mind, as we really look to smash this record breaking month.  Tom said I needed 53 to stay "on track", I will actually pass that barring something unforeseen.

I'll say cheerio now, til then,

And in a controversial move that felt a bit wrong and I'll probably get some stick for,  I've mutilated my GBG with a large Stanley Knife as a kind of experiment with only one month left on the current Guide.  Let us just say it weighs a lot less, is therefore more manageable and has 300 pointless pages missing from near the back.  Controversial, not saying I'll do it with the NEW edition, but this was a trial to see if the book still held together from the spine, and it does!  And it has the back cover in tact.  Poor Isle of Man final page looks a bit ragged but I'm not off there before September, and when opening it, the pubs on the inner part of the right hand pages are a bit trickier to highlight as they are a bit more 'raised' where i didn't quite get the full page out.  There you go, that was a paragraph for the purists.
Posted by Si 'BRAPA' Everitt at 12:18 am