Can I have my weekend back please?  Not often I say that but after a pathetic return of one new pub and a highly pre-emptive pre-emptive, I'm not pleased with myself.  It all went wrong when I slept in until 1pm on Saturday, despite having only had 3 drinks on the Friday Christmas do - one of these being a can of Red Stripe, the other a pint of vinegar at the usually woeful Parkside Tavern in L**ds.


Sunday travelling and pubbing is far inferior to Saturday as any pub goer will tell you, but why trains to Worksop only started approx 2pm when I was in Sheffield for 10:30am was just plain rude?!  It was time to pop into the proxy BRAPA nerve centre in Sheffield to gather my thoughts .....


Soon I was in a taxi for the 'short' 8 mile run up to Wortley (busses would take too long and I figured if I got there n back ASAP, Worksop was still on).  The taxi driver said he'd wait for me until I asked him to take me to Chapeltown on the way back to save cost, when he decided to ditch me and give me a card with their number.  When I rang it to say I was in Wortley, they coughed nervously and said they had nothing available all day!

The Club of the Year awards are fully justified, and for 35 mins at least, I was able to enjoy the splendour of this amazing place as time seemed to stop.   You know when you are stood at the bar, three locals let you go before them (remember, they are club members, I'm a CAMRA interloper) before nodding towards a complimentary spread of cheese and biscuits, you are in a good place.  Someone asked an old lady what she wanted to drink but she said "ey up, I want to get mi cheese n biccies and get settled first".  It summed up the place, no one under 60 but me.  A man volunteered to take my photo as I was (slyly) snapping away like tourist scum, a huge portrait of her Maj and Phil Windsor looked down on me, there was enough tinsel to shame the Plough & Harrow in Warfield, and a man stood up with a microphone to announce the prize winning raffle numbers - the runner up prize being a mixed grill, the winner got a gallon of beer.  He couldn't find the chalk for the blackboard to record the numbers.  An old stager called Horace thought he'd spied it on top of a shelf, but it was only dust.  Horace was politely asked to get his eyes tested.  The only music that played was Johnny Cash.    I didn't take any complimentary cheese n biscuits, it didn't feel right, plus Judgey Jesus would have probably walked in and thrown a giant olive at my head.  If it hadn't been for the BRAPA 2016 staple of Derby County and Tom Ince playing brilliantly on a TV screen, it'd have been 100% successful.  99% will have to do.  Are you watching Penistone?  This is how a club should treat visitors.

It only seemed right to hop on a bus to Penistone after that, and then a long wait in the most rattly single glazed waiting room in history and a long train journey back to Sheffield.  By this time, Worksop hopes were looking slim with work tomorrow, and a train cancellation around Retford/Donny made my decision easier, so I played safe.

40 mins waiting in Sheffield Tap, I'm starting to finally get a feel for this place, on one of their silly tiny tables with beer of the year Bingham's Stout and some half a Bad Seed.....

Back in York, it was nearly dusk but time to visit a place which only opened on Friday (Thursday if you are a shareholder, Punk Rock!! Dire Straits Style!)

I knew the Aberdeen one was a highly optimistic pre-emptive so I couldn't ignore this on my doorstep could I, especially as rumours that BrewDog may return to cask have been circulating on and off for a while now.  And then who'll be laughing?  Me, that's who!  I entered to the smell of newness, very much like SociAle which opened just down the road a few months ago, though this is a deliberately darker dingier effort, designed with the serious (some may say discerning) beer (keg) drinker in mind.  I was greeted by a friendly personable barman (imagine Peter Andre if he lived under the city walls for 5 years and wore a beanie hat at all times) and he asked if this was my first visit.  "You've only been open two days so errm yeah!" was my reply.  He asked me what brought me here so I told him I live 5 mins walk and I normally drank cask ale in pubs like Brigantes next door - I had to get that in.  A man with a reddy brown beard and a lumberjack shirt (I'm not making this up) turned slowly to look at me, did he disapprove of my comment?  I felt like I was in a SeetheLizards parody blog, I bet he was called Luke,  Three leather booth seats were taken by slightly pregnant women who seemed to be judging how much Hardcore IPA they'd have to drink to spawn a hipster Twild.  I headed for an excited sign shouting "MORE SEATING THIS WAY", it was a bit like being in a ghost train.  I thought I'd gone outside, but it actually had a roof and reminded me of being in a gig venue with no music and Pret a Manger.  I asked a woman if I could perch on her bench "yuurrr, we're leaving in a minutsh anywaysh" she slurred.  They were still there half an hour later.  My drink was called Hoppy Christmas, served in a 2/3 measure because even the wildest punks know it is the final 1/3 that kills you.  Just ask Sid.  The folk in here made for great people watching.  The four stages of BrewDog bloke evolution - Seasick Steve, Tony Law, Dominic Diamond,  Dave Gorman.  Well apart from two middle aged Americans who looked lost in a Simon and Garfunkel kind of way (definitely a SeetheLizards parody!) I left having quite enjoyed it in an amusing 'ticked off' kinda way but I'm not cool enough to fully appreciate the intricacies of this chain. 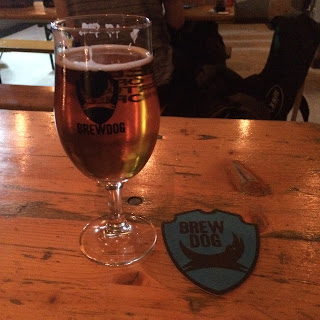 So you may think Sunday's pubs couldn't be ANY more different, but in one sense, they were identical.  They were almost exact stereotypes of themselves.  And that is reassuring.  To me.

Only one South Yorkshire pub left to do, New Year's Eve is the day!  I was perhaps a bit hasty with my "work is too stressful so am not doing midweek BRAPA for now" decision last week.  Even the 'Project Team' thought this was a crying shame (or do Aussies and Glaswegians just encourage drinking at any opportunity?).

To compromise, I'm going to go back to the 2014 strategy i.e. instead of going alphabetically, do what is closest to Leeds and work my way outwards, by which time, things may've settled down.  So West / North Yorkshire midweeks start again tomorrow, and as penance for my crappy weekend, I'm off to squeeze an extra one in on Friday night too pre-West Ham.

Have a good week all,