BRAPA - Are you Essex in Disguise?

Three more East London pubs were ticked off in the name of BRAPA yesterday, to rocket it up the league table by 8 places, overtaking counties as amazing as Lincolnshire, Glamorgan and Ayrshire.

2016 BRAPA started in East London, so it seems fitting that the last "social" day of the year should finish there.

All round BRAPA legend Tom Irvin tracked me and Dad down on the train going east out of Liverpool Street towards Essex, with the honing instincts of a bloodhound with a ginger beard and a bad cough. 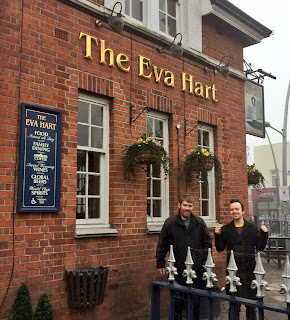 I'm sure the percentage of GBG pubs listed under London that are Wetherspoons is higher than elsewhere in the UK, and with no 50p vouchers seeming to cover the month of December, it felt like salt was being rubbed into my wounds (I was still suffering with man-flu).  Eva Hart the woman is famous for being one of the Titanic's oldest survivors, so the lack of Titanic beers made me feel like they'd missed a trick.  It was "Weltons" ales all the way, but not before the barmaid (who Dad labelled "gossip knickers") kept following her old crone gossip buddy around the bar to talk about car parks despite the fact that a shitload of customers were waiting to be served, by her, the only staff member!  She called us 'dear' though and sounded like Babs Windsor so something of a consolation.  As 'Spoons go, this was quite a pretty and cosy one, and we found a quiet booth in the raised area, quiet until Tom hacked his guts up and the pub alarm went off (not connected I don't think).  The barmaid said she was "off to change the cellar" which sounded like a huge task.  Our table was sticky and covered in crumbs, but the ale, strangely called "Heat Was In the Very Sod" was nicely festive.
Quite a typical early morning London 'Spoons experience.

A couple of stops further east was Gidea Park, and a shortish walk from the railway station saw us at this beautiful looking old pub, amazingly it still wasn't 12 noon so Dad was a bit eager trying to break in, a few locals with the look of unhappy Hammers about them lurked in the background.

It felt like good manners to let the locals go in first as we heard the door unlock from within - not that we had a choice - but what I hadn't accounted for was another group racing around through a side door from the carpark.  You snooze you lose!  Popular pub, and you could see why with low beams, nice and creaky, attempts at quirky decor.  Shame then that my jolly "hello!" to the barmaid wasn't reciprocated.  Miserable bitch, I thought, until I heard her sounding off to an equally miserable blue-topped local about how her morning couldn't have gone any worse.  She was rostered on til 7pm, and Friday night had obviously been busy, she'd had a lot of cleaning up to do.  Should I suggest working in the pub trade might not be for her, best not, might get barred.  She then had to tell me the Brewers Gold was off, I just nodded sympathetically.  Poor lady.  My Courage Best was lame, but the Tim Taylor Landlord was superb - this wasn't official BRAPA so I could stay for two pints, hurray.  The locals were watchful, not as friendly as they should've been, and I hit my head on the soft ceiling cushion on the way to the gents, and I'm a short-arse which just shows how low the roof is.  I was ankle deep in water as I stood at the urinal, I made a joke about it, I got glared at by the ghost of one of the Kray twins.  It was that kind of pub.

One stop back down the line found us in Romford, a place I've always wanted to go to since I found out Steve Davis had the Pool nickname of the Romford Slim and 90's chav girls had hairstyles known as Romford Facelifts.  The place itself was a bustling little Metropolis, plenty of characters, and it is fair to say the 'Spoons reflected that ......

Probably one of the more obvious pre-match drinking venues for West Ham fans despite the relative distance from their new Olympic soulless monstrosity, this was a hotbed of hubbub but a surprisingly open and friendly one.  The young lads seemed to have abandoned any vague Green Street leanings in favour of the chirpy Cockney wideboy approach.  Meanwhile, the oldsters looked like they were out of day release from the 'home', with their suits and army badges and insistence on calling you 'sir' before a carer appeared out of nowhere to help "get them back down the stairs".   In searching for a table, Dad was asked to help two old dears carry a tray of coffee and pastries up four steps.  He was described as 'very kind' as profuse thanks was showered upon him.  We perched between Noel Edmonds fruit machine and the bar, it was standing room only of course, supping a very good Lymestone ale called 'Stone Cold' before the mad dash to the new stadium.  Quite a classy place this pub and Romford, if you dare to look beneath the surface!

After a game where the frame of West Ham's goal was man of the match, it was important not to dwell on another defeat and just be pleased it is easier to escape from Stratford than their old ground - which meant BRAPA possibilities were back on the agenda...... 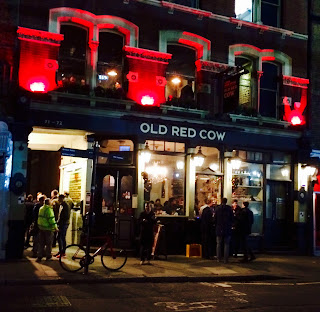 I'd noticed how close this was to Barbican on the way in, liked what I read, liked that it is on the 'first page' of London in the Good Beer Guide, so thought I'd give it a go.  (as if I get to choose what pubs I go to!)  We entered to a squashy one roomed square pub room, with a nice selection of Moor beers and a few eager staff surprised to see non suited, non Prosecco drinkers in their pub.  As young ladies with long legs dangled from posing tables (it was like being in an advert for leg waxing), I realised that if London pubbing has taught me one thing, it is always worth exploring upstairs and downstairs for 'hidden' rooms.  And upstairs, I found an extra bar and we timed it just right as Hipster Roy Wood and Wizzard were just saying their farewells to some gushing staff.  Dad was loving this place as a potential new stop off point on his frequent trips to London, but Tom was more cautious - noticing that ordering a bowl of chips for £4 was almost on a par with his entire weekly food spend!  And I'm all for Scotch Eggs as pub snacks, but what the heck is a Padrow Pepper when it's at home?  Never seen one of them in Rochdale.  And why was the Christmas garland table decor so OTT that you couldn't rest your elbows on the tables?  But let's not complain too much, this was, as Central London goes, a pretty darn good pub to be in.  The beer upstairs was keg only but Dad got me a Titanic Stout for the road (rail?), it felt like the day had come full circle.


It was a nice quick & painless journey back to York - I'll be back probably on Tuesday for a West or North Yorkshire pub tick as we wrap things up before the Christmas break.  Have a good week.  I've lost my voice which might be tricky when ordering beer.