"Eeee by gum" exclaimed my Dad, Bernard "Chaffeur" Everitt as we pulled into an unpromising looking eco-lodge development just outside Aysgarth on Sunday morning where a twild was hanging from a swing and a bearded young couple tried to look energetic, "I can't see this being open at 11am on a Sunday...."

I told him to trust me,  after all, both the GBG and Whatpub specified 11am opener Sunday.  But being a man of action, he'd found a reception area to the right of the bar, which was sitting in darkness.  "Is your bar open?" we asked the boss-man.  Had he replied with "11am?  On a Sunday?" he'd have had a point.  But his response was "Bar? Baaaarrrrr?  BAAARRRRR?" as though he'd been wondering for years what that long counter with drink fonts along it was all about.  We agreed to return at 12 noon.

No wonder that as we pulled up at the other Aysgarth 11am Sunday establishment, the good chauffeur had convinced himself we'd never get inside ..... 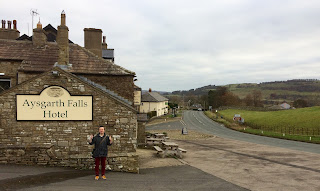 Even inside at the bar (albeit, very lowly lit with not a soul in sight). Dad spent the next five minutes muttering that this was no guarantee we'd get served, but then a nervous looking old chap appeared and soon, two pints of Isaac Poad 1863 from York's newest brewery were ours.  We sat in the warm and very Dalesy bar, and apart from spotting a backwards Old Peculiar clock, we just spent the next 20 mins as follows:
Me : "oooh nice place this isn't it?"
Dad : "mmmm decent pint isn't it?"
Me : "very cosy, the place, not the pint, which is nice too, glad we got served."
Dad: "mm hmm"
Things started to pick up when the old hubbie barman chap started being called "chef" by his various relatives, a possible sign they take food too seriously.  Then, crazy Mrs Falls Hotel appeared with the promise "I'm about to inflict some Christmas music on you both, sorry!"  Not wanting to be Christmas curmudgeons, we tried to remain positive, even in the face of Mariah Carey's background bleating.  Such positivity on our part was dismissed, Mrs FH decided we both hated Christmas, hated the music, hated the decor, probably the hotel, and were generally having a miserable time.  The harder we tried to reassure her, the worse it got - so we left.  This might be the pub where you can pay to look at a waterfall in their garden, but if I want to see running water, I'd go to the gents for free.

12:02 and it was sarcastic slow handclap time for this ultra modern weird comfy contraption, they'd located the bar, and by jove, it was open!  Mrs Bistro, who'd been lurking in the shadows whilst her husband was being a "bar denier", knew we must be on some crazy pub crawl (good guess) so after some BRAPA chat, she declared she was delighted to be pub 964 on the list and we took our pints of grapefruity Semer Water to a low leather settee where, as you may expect, my emergency beer mat was required.  As there was a wildlife magazine on the "coffee table" I used a squirrel's face instead - this was the bravest BRAPA protest of 2016.  Apple air freshener was the overwhelming pub scent, the toilets were hidden from the restaurant by the kind of screens you get naked behind for your GP, but despite all this, I've had a pint in plenty worse places.  Staff were really good, though Mr Bistro was still looking perplexed every time he entered the bar, preferring to stay in the "day centre" style area.  Lunchtime couples came in, all bearded with a whiff of middle class glamping holiday about them.  The highlight was when a self-important looking woman marched out of a side room with a tiny dog under her arm, straight for the restaurant, like she was showing them the "Special of the Day".  And that sums up the Bistro. 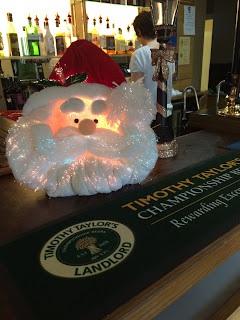 A short drive down the pretty Bishopsdale road took us to a great little village where we'd had a dubious pub-closed incident in the summer, when they were away on holiday yet still able to jet back from Ibiza to open at 6pm every evening .....

It was all very "Moneyrow Green" as the barman tried to entice us away from the chilly seat on the far side to sit on comfier seating by the bar, near the fire.  But unlike me, Dad was very quick to say no, by which he meant "I can hide in this huge settle and eat my own sandwich without you seeing me so there!" Gotta be strategic in these food orientated Yorkshire Dales pubs.  But at least it was a proper old style pub, with an outdoor loo which is a dying breed these days - York's Royal Oak went from an 8/10 to a 3/10 since it moved it's toilets indoors, though that's a different story.  Martin Taylor will be delighted to hear that Dire Straits 'Brothers in Arms' was playing, and I enjoyed EVERY minute.  Punk rock.  And when you thought the excitement couldn't get any more high octane, Dad went to the car to grab a folder containing shower designs as I'm having a bathroom refit in the new year.  Oh yes, high octane.  No wonder I forgot to take my much awaited "Oral B in Thoralby" photo and had to cheat in the Fox later on.  The Buckden Pike was a quality pint, and a reminder of where we were headed next.

Even by Yorkshire Dales standards, the area around Buckden was spectacular, really pretty village and one of those picture postcard pubs I found in the not too far away Arncliffe, and a couple of others - Malham's Lister Arms springs to mind. 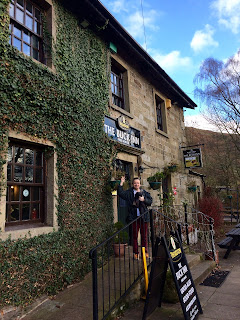 And an above average selection of ales and two fires in probably made this pub of the day, though the lack of Dire Straits and insistence on playing any song utilised in an advert for soap or washing up liquid was a choice that only the gaggle of clucky mother hen barmaids can explain.  "Lesley" raced straight over to the far end of the room, where we'd taken our pints of Rocket Fuel, brandishing menus in our faces.  When we explained that we were just here for a drink, her heart seemed to visibly break before our eyes, like "no-one has EVER said that before in this pub."  Shades of the Guinea in Moggerhanger or the Square & Compass in North Rigton, where I was almost rugby tackled to the floor by a hopeful waitress.  However, the pub will be remembered for the conversation we witnessed next to us - and all because a young bearded couple of mountain bikers joked with the waitress "what do you do for night life round here?"  She didn't get the joke, and started trying to come up with ideas!  Despite the conversation naturally petering out, she hung around, explaining her "lack of Yorkshire accent" came from a Dortmund upbringing, whilst she now lives in Keighley  (she did have a strong Yorkshire accent)  Even when their food arrived, she STILL stayed and chatted shit.  Boundaries woman!  It was painful to watch.  One of them had to ask her to go and find some mint sauce (even though he was eating everything but lamb) to get rid of her.  On the way out I heard her asking another couple what they were doing for the rest of the day.  Stop.  Talking.


Back in York, we popped into the Fox as in tradition on such days where we planned strategy for our next chauffeur day encompassing three North Yorkshire pubs, two beginning with a C, one with a G.  Crikey, I might be able to finish the whole of Yorkshire before September 2017.

On the downside, work is so crazy due to that project which sent me to Oz, I may have to temporarily knock Tuesday night BRAPA on the head - at least far away ones, and concentrate on easier ones as I'm having to finish work and 5pm or 6pm for forseeable future.

I'll be back on the slightly later day of Sunday for some W based fun.