BRAPA - A Welcome Return to Lincolnshire

It's what Liz Smith would've wanted.  I achieved my first Lincolnshire pub ticks for the first time in nearly two years.  It was a Boxing Day bonanza in the renegade "North East" of the county, which seems to think it is a county in it's own right.  We'll call it "Post Humberside Hangover Syndrome" (PHHS).

Me and Dad drove down over the Humber Bridge, where the waters looked particularly murky and forboding on a chilly Monday morning - we were meeting the vast majority of the "Welly gang", our Hull City friends who used to frequent the Wellington in Hull which for a time circa 2008 was probably the best pub on the planet. 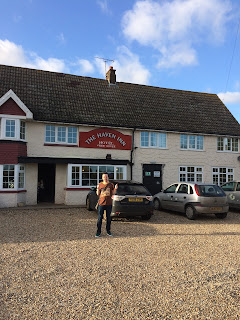 Dad reported photobombing twild interference as he stepped up to take the BRAPA outdoor pub photo, sadly he didn't capture them in shot.  The location was quite remote, but there were plenty of diners lurking and I had to veer to one side to avoid collision with an elderly woman with dark glasses, stick AND scooter.  The pub seemed to have something of a reception room, which I think might have been a dining conservatory, and finding the bar wasn't immediately obvious which is never a good sign.  We saw our Welly gang in the corner as I went to grab myself a pint of Tom Wood's best bitter (still a novelty to a York boy like me) - the barman juggled the change expertly, but he did probably have six fingers on each hand so a bit of a cheat.  Furthermore, I had to go back for a 'top up' as I'd got a three quarter measure but I'd rather blame lively quality bubbly beer than bad staffery.  If that's a word.  Tom was able to recount a humourous exchange on their arrival:
STAFF : Hi.  Are you dining with us today?
WELLY GANG : We haven't decided yet.
STAFF : Have you booked a table?
WELLY GANG ; No
STAFF : Well you're not dining with us then!
Classic 2016 pub culture.  Well, the pub had a nice cosy feel despite the dining, some brunettes skulked around trying to be gorgeous, a wooden pheasant dominated the window, the roof was low and had beams, walls were a nice warming red, I grabbed a beermat from another table as instructed by Chris Irvin, and I was told about some floods of 2013 almost destroying the pub.  I felt the wall behind me,  It was dry.  On the way out, local expert Christine took me and Dad up a steep bank behind the pub to admire the views of Barrow Haven itself.  I almost commented it looked incredibly Lincs but she told me it reminded her of East Yorkshire.  This pub did remind of the Hope & Anchor at Blacktoft, only a bit more sterile.  Still, worth the trip out.


A short drive through Barrow back to Barton allowed us to have a local history tour of the area, everything from coal to the post office, as Bernard drove slowly to allow Bernie to keep up.

As we walked in, Ben and Christine were greeted heartily by the friendly young bar chap and strike me pink if I didn't see one Tom Wood's or Batemans beer, but a selection of strong dark winter guest ales - just what you need when you are about to watch Hull City playing at home to Manchester City.  The highlight was the Yorkshire Heart Blackheart Stout - I don't often talk about individual beers cos beer is usually boring, but you gotta try it, absolute classic.  The pub had something of an airy modern feel, but still did just enough to be cosy and comfortable though some carpets and bench seating would be a nice addition in 2017.  I may have imagined a fire, but a Christmas tree decorated in pump clips is tasteful in anyone's book(!)  We sat and chatted about celebrity deaths - we'd already done the Hull City quiz in the last pub which I'd like to think I won but nobody was keeping score.  Boo.    Suddenly, I saw a bright shining light emanating from the midriffs of a few new arrivals - yellow bellies galore, led by the friendly but slightly mad presence of "Scunny Sarah" who's previous appearance was at the Rising Sun Beer Festival in Sheffield so she has a 100% BRAPA record.  Kick off was fast approaching, it became clear me n Dad were the only ones actually going to the game!  It felt a bit like a practical joke, but this was a great pub session, reminiscent of Welly days of yore.

Me and Dad managed to squeeze in a quick half at the George in Hull, which after many false dawns, has become a good pub which no longer has to rely on a small window for popularity.  The beers were all Abbeydale and Bradfield so wonder if a Sheffield person has taken over.  I read somewhere that the last time it was this good a pub, Charles II was on the throne!

Hull City then played well for ages but still lost 0-3 thanks to some terrible substitutions (too much Abbeydale Moonshine Micky!) which left you wondering if life would have been better if Dad hadn't turned right over the Humber Bridge and had instead carried on to the likes of Winterton and Burton-upon-Stather.

Whether or not I squeeze in a West Yorkshire tick tomorrow night, I'll definitely be back on Saturday for some New Year's Eve fun - it's what George Michael would've wanted.