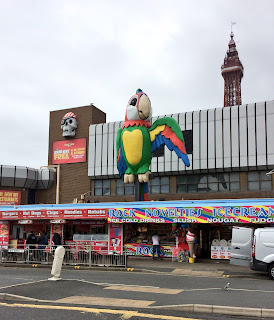 A 16th year of attending the Rebellion Punk Festival in Blackpool (even though it used to be in Morecambe and called things like 'Wasted' and 'Holidays in the Sun'), and I've learnt over the years that you can't just stay in the venue the whole time, visiting band after band, drinking Murphys and inhaling sweat and funny smoke.  No, you'd burn out very quickly.

No, you need to give yourself a bit of escape time getting sea-air,  sitting down and drinking quality (hopefully) beer.

So on the Friday afternoon, me and fellow punk traveller (not a gypsy) Jig Johnstone meandered through the backstreets (somehow even more scarier than the seafront) to find my final Blackpool required pub tick.....

This pub experience was fraught from the get-go because whilst Jig was taking this photo, a grumpy old man on a shop mobility scooter tried to run him over because he was in the exact spot he wanted to park.  As if he couldn't have parked anywhere else miserable old bastard, luckily two other locals looked sympathetically towards us, otherwise we might have just run away crying.   In the build up to my visit, three Twitterers had all told me this was NO LONGER a Wetherspoons, thanks to them so I didn't make a fool of myself thrusting 50p vouchers down the bar staffs throats.  On first glance, this had 'Spoons' written all over it, but two things were a bit different.  Kindly, older staff and a more local beer range than you might expect. We drank Fuzzy Duck beers from Poulton-le-Fylde, the barmaid refusing to say Pheasant Plucker in case she got it wrong, but the following day, she was more confident with a Cunning Stunt.  £4.10 for 2 pints was pretty amazing too.  Having watched "Homes Under the Hammer" that morning, Jig got into his BRAPA stride a bit too well and started telling me how the bay windows offered much natural light!  I'm glad he's not a pub blogger.  Three men sat on their own with Spa shopping bags in the gloomiest pub areas, one put his loaf of bread, biscuits and milk on the table as though he was going to start a feast.  It was that kind of pub.


We had bands to see so fast forward to a bright and sunny Blackpool Saturday, as we walked to Blackpool South and took the rural Burnley-ish train to St Annes (slightly delayed but we didn't need a train ticket so no complaints!)  A man spent an age helping his disabled wife step off the train, using the joke "it's a big step for man-kind" not once but twice.  Wasn't funny the first time mate! 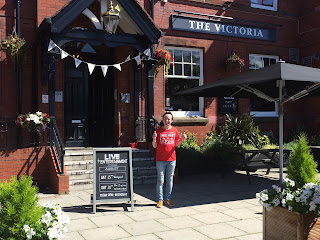 After a 15 minute trek, mainly in a circle, we found the furthest out pub but it didn't occur to me it was 11:50am and it didn't open til 12 noon until the plant watering lady outside told me.  Had my punk head on, not my usual BRAPA one!  Landlord arrived, we were sat on the pub bench and Jig was worried we looked like alcoholics so to put his mind at rest, I did my usual "I'm not an alcoholic but this is BRAPA" explanation and got assurances they'd be open dead on 12 noon, which they were.  The young barman served us excellent Hopstar Summer Daze, but we also got orange juice chasers as seriously dehydrated from all the moshing and Murphys.  Barman was friendliest of weekend along with our 18 year old friend from Pump & Truncheon, but we took our drinks back to the nice beer garden at the front where I had to field a series of queries from "Lytham Life" twitter account.  A twild was hanging out of a window, but other than that, just basked in sun with two churches either side of us making up for the slightly scuzzy main road.  Oh, but who promotes Pimms at a beer festival? 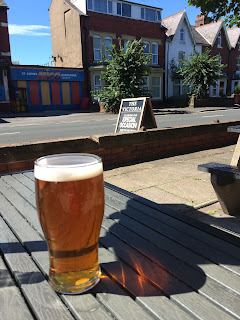 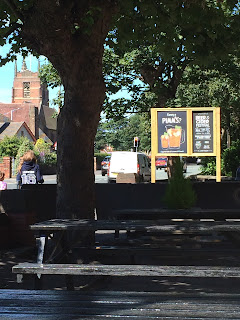 Nearer the station and not far from the prom, it was a hive of activity as the locals took joy in being part of the BRAPA photo opportunity.  "Ohhh, I thought you were doing something like that!" said the old man as I explained visiting every pub in the UK.  You can't tell some people anything.  More on him later.  This was clearly my favourite pub of the weekend, a classic in any part of the country, a typical bar scene was lots of miserable old men slumped over the bar blocking the handpumps, half watching cricket.  The barman noted how many teenagers had been going upstairs to the pub toilet with phones out, looking confused.  Only one conclusion, "there's obviously a valuable Pokemon up there!" they then slagged Pokemon Go off for 5 minutes, I was impressed they'd even heard of it but conscious me following my GBG App to the pub might make me scum aswell.  The pub was a right bric-a-brac nic-nack old curiosity shop of joy, with those things you stick your head in to have a "hilairious" seaside photo, a fussball table and lots more.  4 old women annoyed me by having a virtually empty pub to aim at, and spending ages debating where they'd sit, changing their minds, and eventually going outside.  Grrr, I was fuming, I'm turning into my Dad. 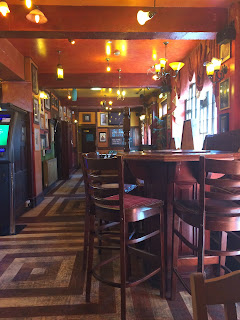 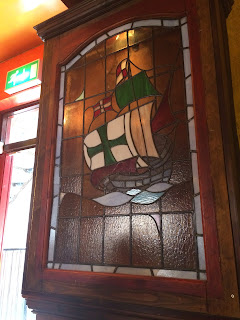 Our final St Annes pub tick was just behind the Fifteens, and the old man I'd been chatting to outside was propping up the bar but obviously pleased to see he wasn't the only one going around the pubs.  Now this place definitely was a Spoons so I used my 50p vouchers on some powerful 5%ers from Reedley Hallows which I'd previously had in Burnley.  With the outside heaving due to the unexpected sunshine, I decided we'd spend the half hour chatting to our new friend, who despite his lack of teeth, was a man who made a lot of sense!  Ok, so he was from Chorlton-cum-Hardy but I won't hold that against him, especially when he started badmouthing all of the one syllable trendy bars like "Scuzz", "Sprog" and "Bum" (sorry, I can't remember their names).  Sadly, he was still semi-proud of it's independence , didn't like my inference it was a glorified young persons Manc extension, comparing it vaguely to Stockport and got excitable about Cheshire briefly, before talking non-stop about his passion for music until I eventually managed to politely tell him our train was due and we had to dash.

We did get gripped for train tickets on the way back (by THREE different people before the train even set off - no fare dodging allowed here, maybe I was under surveillance), and popped back into Auctioneer for a pee and a pint before the walk back to the festival.

That was it cos sadly I hadn't seen the Twitter comment telling me about two pre-emptive Blackpool ticks but I'll be back in 2017, and failing them being in the guide, there is Lytham itself or Fleetwood.  I almost don't want any bands to be on!

Over the weekend, I managed to offend a man from Kendal for agreeing it was shit (I've never been) and mentioning mint cake, I offended an Everton fan from Widnes by asking if it was in Merseyside, and a weirdo with heart problems from some shitbag village near Blackburn by saying it was a horrid town with no good pubs.  At least a scary Glaswegian agreed even a Glasgow Wetherspoons experience was preferable to paying £4 for a pint of soil (Murphys) in a plastic glass.

Honestly, I try my best to be a UK travel ambassador and most folk just don't want to know......