I'm pretty sure that when Mum and Dad invited me the chance to tag along with their Welsh holiday, they knew that the biggest factor (along with their obviously great company) was the chance for me to tick off some pubs which might not be easily achieved due to (a) lacking public transport and (b) weird opening hours.

NOT that I was taking it too seriously, but I did make sure this map was at the the forefront of their consciousness ..... 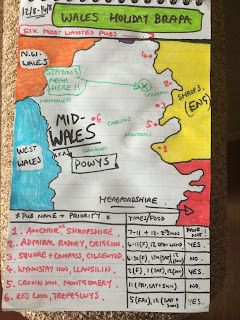 Could I get all six done?  Well, this was no ordinary BRAPA trip out as it wasn't totally in my hands.  My frustrations were bubbling under early doors, as a stop in Oswestry for a cheese and ham toastie was all well and good, but with neither pub ticked off, this was torture for my BRAPA brain.

On a happier note, Dad had programmed our stoic male SatNav companion (Mum wanted the jabbering female but was overruled) to stop at pub number 4 on my map, and after a few winding roads across the border, we were there and hurrah, it was open!

As I sped round to the bar where four companionable locals were chatting nonsense with the archetypal Welsh barman, I had to laugh when I saw York Guzzler as one of the two beers!  At least that gave me a route into conversation "we're from York don't you know?" (surely enough to impress such yokels .... only kidding) and I then embarrassed Dad accidentally by making him pronounce Bwlych-Y-Cibau, where we were staying.  One local claimed Welsh was the easiest phonetic language ever "much easier than English" so Mum and Dad motioned me and our excellent pints of Big Shed Tyger Tyger to a bench table before I got embroiled in any arguments.  Mum had a lemonade and revealed she rated it quite highly and it might be included in her forthcoming 'Good Pub Lemonade Guide'.   The pub decor was all superheroes and salamanders, a weird combination, Star Wars quite prevalent, but incredibly basic and Mum commented she could not imagine feeling appetised enough to eat in here (I had a feeling I'd see at least one less appetising pub this holiday!)  A bit of excitement as I went back for half a Guzzler out of curiosity (poor and according to Dad, he'd heard them whispering it was about to go off) when the landlord, who was quite deaf, had the loudest mobile phone ring ever witnessed in a pub EVER, he couldn't remember it was hiding on a window sill, and then the cash till bit his hand Arkwright style.  A quirky start to Welsh pubbing.

After checking in, it was decided that after the long drive, pubbing would be resumed tomorrow so I set Dad to work combining pubs 5 and 6 with a walk around Caersws..... 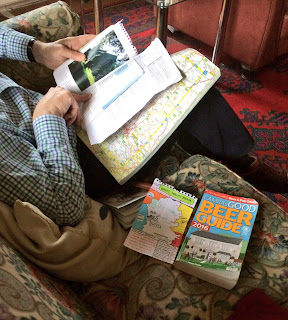 The first bite happened that evening as we sat down to our evening Ploughman's, two bats got in and started circling us menacingly (no literal bites to the bottom though).

That might have been a bad omen, as the following day, me and Dad unfairly made Mum jump across a ditch she wasn't comfortable with and her ankle went SNAP and she went down.  Ouch.  After carrying her back through field after field, we were soon in Shrewsbury Infirmary (I'd done most of my pub ticks in Shrews so had been edging towards Aberystwyth's A&E) and luckily, it wasn't broken!

To Mum's absolute credit, she looked up at her lowest ebb and almost like a dying wish, told me to ensure that whatever happened, I got the Anchor-Anchor ticked off.  Proper Pub Mum!  Of course, my BRAPA mind interpreted this as "crack on with your entire pub plan and add a few cos that's all that is left for us now we can't do any walks".

Meanwhile back in York, my sister's boyfriend reacted to the news by using an axe to smash a coconut.....

Let us hope day 3 and 4 of the holiday could be more productive pub-wise, I had to make up for lost time and you want to read about pubs, not family drama!