Friday night is probably my least favourite time of the week for pubbing, but a combination of circumstances (too boring to list here) meant that it "felt right" to be on the 16:33 Leeds-Elsecar where my seat had previously been occupied by one of those dangerous 'craft' can drinkers......

Despite the rain, I walked the 1.5 miles to Wentworth along one of those frightening roads with no pavements, a reservoir, and lots of fast cars.  It's a wonder I'm still alive to do this pub ticking mullarkey.

Wentworth, even in the gloomy grey wet, is what they'd describe as a "chocolate box, picture postcard" village if it was down south.  So instead, we'll call it a "chip cone, cigarette football card" village. 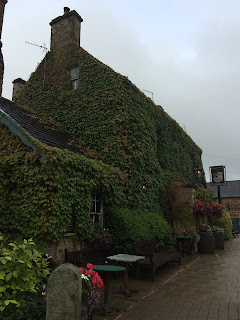 The ivy clad pub certainly seemed to fit within the village image, and it was one where I entered to find four members of staff, all looking at me expectantly.  "Hello welcoming committee!" I almost said, but the friendly ginger bearded male stepped forward to serve me an Ale Fresco from a disappointingly Greene King based range of ales.  Diners on posing tables seemed to be the order of the day, but a 'secret' seating area to the rear would have been delightfully pubby, had it not been next to a rather severe reception desk - leather bound notepad and all.  Yes, this was a hotel too, though I did wonder at first whether it was all for show.  A wedding party was getting steadily drunk outside, and had lost all control of the Wedding Twilds (i.e. bridesmaid twilds and page boy twild), who were running amok indoors, playing hide n seek much to the local's disdain.  "Shit up a stick!" exclaimed one older chap in disgust, a phrase I really must remember.  I was joined by the slightly crazy redhead kitchen manager chatterbox, who was finishing her shift with a pint of Carling.  She'd forgotten the Prosecco was on special offer and was most upset, and was soon joined by all the staff - our ginger bearded friend, Blonde Goth and Miss "I'll keep telling everyone I used to work at Asda" barmaid.  I felt almost part of the staff, especially when a fifth woman (the only one doing any work) arrived on the scene to reveal the ending of Disney's Pochahontas disappointed her!  Whilst the staff chatted about working in a pub at Christmas, we had some real drama as an old man complained his ham, egg & chips should have had HOT ham rather than cold.  I totally disagree.  Order gammon if you want hot ham, idiot.  I left, saying bye to my new staffy friends. 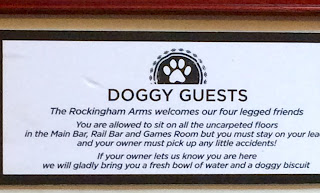 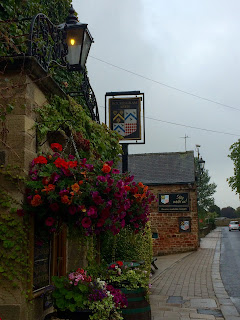 A few yards down the street and opposite the bus stop set back from the road, was Wentworth's other pub.  The evening sun was out now but outdoor seating was too wet to sit out ..... 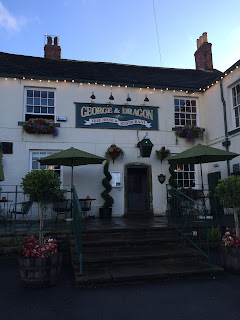 I shouldn't have been surprised (but was) to see the pub absolutely heaving with a more traditional Friday night atmosphere than in the Rockingham.  Being a Friday, this wasn't the relaxed pub experience I crave - in fact, in the 40 minutes I was there, it managed to achieve THREE of my five biggest pub pet hates.  Firstly, "standing at the bar" when there is enough room to move throughout the pub.  No one budged to let me see the ales.  Secondly, (and part of the cause of the first) the entire left hand side and a back room to the left were reserved for diners, yet the left room was empty, but being guarded by a zealous waitress.  It was like the pub had had a stroke, and speaking of which, the barmaid's botoxed faces (think blonde versions of Robert Palmer's backing girls) couldn't smile even when they did finally serve you.  Even my pint from the normally terrific Chantry tasted a bit lame, possibly my mood.  And then, my third pet hate, the pub allowing flower sellers/charity box people into the pub to disturb not just drinkers but the few diners too.  I hate this - captive audience, possibly not 100% in their clearest mental state due to alcohol, possibly not wanting to look bad in front of other people, it is so unethical.  Just wrong.  Luckily, the good South Yorkshire folk gave her the shortest shrift I've ever seen in this situation!  And then things improved, I'd been squashed against a wall where a terrifying man kept doing elaborate physical comedy routines, Pinnochio his favourite.  Imagine a skinhead Lee Evans with the voice of Neil Warnock.  See what I mean?  But now (and I shouldn't have been so naive), there was loads of seats in the main bar all along and I got half an Abbeydale Deception which was incredible.  And I could imagine how much I'd have enjoyed this pub on a winter's Tuesday night, showing that it's all about circumstances "on the day".

Walk back was quite a dash as I'd forgotten Elsecar railway station was up a hill beyond all 4 of it's wonderful pubs.  I think I'll stick to Tuesday night pubbing in the future but was an interesting experience and did enjoy Wentworth even if it might sounds like I didn't!

Ages ago, I asked what your favourite pub pet was.  Well, the results are in and it must be true when they say "mans best friend" because dog's won out quite convincingly.

Not just any dog though, a lollopy old big dog, preferably asleep in the corner, and I'm sure if you were picturing the archetypal pub scene, you might also picture a dog sleeping at his master's feet.

People would however, prefer to see a PUB CAT than a yappy little Terrier type creature.  I am a cat lover, and whilst they may be seen as too "leftfield" to be part of a traditional pub environment, they are generally low maintenance (i.e. more like a lollopy dog) i.e. they add to a relaxed pub atmosphere.  Exceptions to this obviously include that crazy creature at the Wombell in Wass, North Yorkshire (cat is worth the visit alone) but on a trip to London's Pride of Spitalfields the first time, it took me 2 hours to realise the cat asleep on the mantelpiece was real and not stuffed.

Other animals people seemed to enjoy seeing in a pub were things like tropical fish and lizard / reptile creatures in vivariums.  I guess that they add character to a pub in a different way from how a cat or dog does, perhaps more like 'decor' and quirky ornamentation - I have to say, I do think a tropical fish tank adds something quite nice to a pub.

Birds were less popular.  Most pubs with birds I've been in have felt dirty (Royal Oak, Pickering, Dog & Gun, Aughton and Ship Inn, Sewerby spring to mind) and in the former, going up to the carvery when there's a parrot chatting to you close at hand just felt wrong!  A pub owl tethered up in the garden would be my preference, but those who voted didn't go for it.

Another survey coming up soon, perhaps on your favourite drinking days, having already asked you about what times you like drinking a few months ago.