I once vowed (after a bad experience in Birdwell, South Yorkshire) NEVER to try pub ticking on a Monday ever again.  Since then, I've had a day in rural Ayrshire with no problems, and here in the heart of Wales, I managed to find two Monday 11am openers which weren't Wetherspoons or Nicholsons.  Conclusion, the English are bloody softies.

Montgomery was the most lovely place we'd encountered all holiday - it had the peaceful quality of Criggion, as we walked down the High Street, we were whispering to each other, as we passed museums, model car shops,  twee tea shops and old people with hanging baskets and sticks.  Have you ever had the misfortune to go to Tregaron?  It was like that without the menace and witchcraft and circus elephant buried in pub garden.

There was one of those "left or right" bar choices, Dad chose correctly with left as I'm pretty sure the other side was in darkness, perhaps a restaurant or function room.  But the pub itself, nothing wrong with it as such, quite a nice old building.  Just incredibly dull.  Apart from one old bloke who was trying to get inspired by the 58th repeat of Usain Bolt winning the 100 metres, yawn.  The Three Tuns beer from Bishops Castle in Shropshire tasted like an ancient style ale, was sweet and just a bit too clarty for 11:50am.  It was well kept.  The barmaid was a disappointment, no chat, no eye contact, functional.  She is what I would describe as a P.I.S.S. barmaid (Pretty If She Smiles).  Problem with PISS barmaids, they never smile.  And if they see you writing "PISS barmaid" into the notes section of your phone or on a notepad, they are even less likely to smile.  They might even frown.  But this would be too much a show of emotion for someone so vanilla.  And that was the whole pub.  Vanilla.  Okay, following Criggion and Anchor was always going to be a tough act, but you'll have to show us more than a darts league and Olympics highlights to make anyone love you.


The next pub was not on my original list, but let me tell you it made sense to visit as the bus service is probably tardy, and it was (sort of) on the way back to the place we were staying......

Llanfair Caereinion was surprisingly a good sized town, approached from high up as the road wound down along some tight roads.  Again, it was picturesque, you could imagine some cosy crime drama on ITV being filmed here, the type where Martin Clunes steps on a dog to much hilarity and an old woman gets her stockings caught in some barbed wiring and has to be freed by a blushing policeman.

Anyone who has been to the  Goat Major pub in Cardiff will know that it is not sheep, but goats who get the Welsh heart swelling with pride.  The CD soundtrack of love songs reserved for their Regimental Goat is still one of my favourite pub experiences ever, and whilst this place didn't have such extremes, it was certainly weird - Twin Peaks had suddenly taken over from the cosy crime.  I was disorientated on entry, as a young man let us see the beers, everything felt a bit back to front and I almost wondered if I'd wandered behind the bar by mistake.  This was until the landlord appeared from a hole in the floor (well, probably the cellar) to eventually serve us!  Meanwhile, two well spoken old characters sat to the right, and an extremely old couple sat on plush settees behind, debating a game of Trivial Pursuit, as I looked for the loo and got totally lost even though the door was directly behind me.  The young man helped us find our way to a beer garden, it was a proper summers day by now and the Monty's Sunshine was a great pint, shame about the Guinness glass.  We were hoping to repeat our lunchtime success at Criggion but despite a kitchen and dining area, it didn't look promising, not even cherry pie was on offer!  (Twin Peaks joke courtesy of Mum, who was 'checking in' with us as was now customary).  Bit of a vague reference, but if you've ever been to the Village Inn in Fairlie, Ayrshire, and the Pineapple in Stockport, and thought, crikey, these pubs are seriously full of weirdos, I love them, then you will enjoy this place! 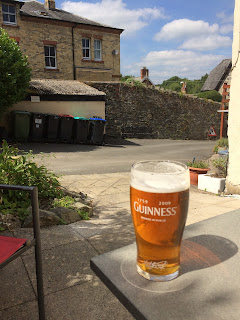 It was back to Bwlch-Y-Cibau for some scrambled eggs on toast, an afternoon nap, watch Neighbours, and all geared up for tonight's "evening special".

A bit cheeky of me this one, but buoyed by the Anchor success, a 31 mile trip towards Gwynedd seemed acceptable, though Mr Sat Nav didn't help with his stupid B-road idea to save us 2 miles.  (It's like one of those well meaning chaps who'll save you 30p on a train ticket even though it means going on a route that takes an hour longer).

As we pulled up in the car park (gravelly area), a youngish man who'd been snoozing/reading on a picnic bench suddenly burst into life and hot-footed it into the pub, almost like our arrival heralded it was 6pm, that the pub was open and needed attending.   Just the one ale was on, "Cwrw Coch" and I'm not sure my Welsh had improved over the last few days as I ordered 2 pints of Queer Cock.  He knew what I meant, a good n proper Welsh ale from some crazy brewery I have no idea about and frankly don't care.  If I was disappointed in the one ale, the pub was stunning.  A heritage survivor, Beeching and his evil mate might have taken out the railway opposite, but the multi roomed interior and old memorabilia recently found in an attic made this place feel like one of those wonderful old Lancastrian or West Midlands pubs, but with added railway charm.  We sat in "Room 4" with an old fireplace, old station benches and a once illuminated pub sign.  Mrs Dovey Valley popped up to tell us we'd found the "cool" room (I think she meant temperature-wise).  We decided to enjoy the second half of our session in the pub garden, but at the bar, a tourist stopped Dad and cryptically said to him "it's no good asking you which beer to choose" which made no sense to anyone.  Outside, a man and his mate exclaimed "it's not a bad life is it?", he was a bit like a male scouse Sinead O'Connor and seemed emotional throughout.  Their third friend, a white van man, turned up and blocked the pub driveway, joining them for a quick Carling which inevitably became a 5 pint session.  The outdoor loo was like a cross between Field Mill and Bootham Crescent, but clean, not even sure it was properly opened but I used it anyway.  Incredibly good pub.  Up there with Anchor and Criggion. 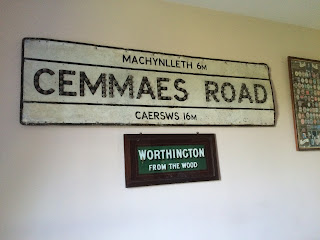 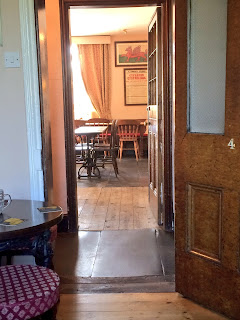 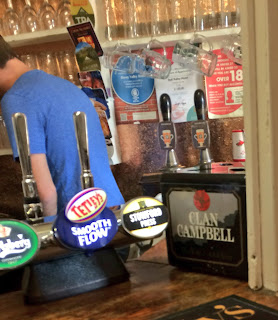 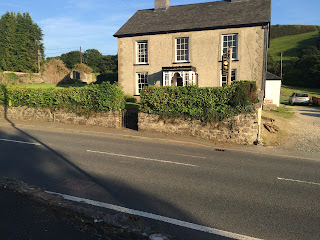 So, 7 pubs achieved was more than I had hoped for from a "family" holiday in a tricky part of the world.  Sad that Mum couldn't get to see more of them but hopefully her ankle recovers soon and massive thanks to her and Dad for their efforts helping me get some difficult pub ticks.

The holiday ended as it started, with a bat flying down the chimney to rudely interrupt my post-meal trawling of Twitter where a man was shredding Wetherspoons vouchers for some reason I never quite understood.

The (fake) 1,000 is starting to look increasingly like it will take place in Wigan!  I half thought about a trip out tomorrow just to get the monkey off my back but it can wait til Saturday I'm sure.