There's something strangely life-affirming about being huddled under a bus shelter at Wigan Wallgate at 12 noon on a busy rainy Saturday, waiting for a delayed bus, with just Tom and a few old biddies for company.

Wigan is a strangely unique and quite brilliant town, hard to describe but it seems to be almost laughing to itself, but hard to know if it is laughing with you or at you?  At least I was able to identify a brilliant pub across the road I'd visited 9 years ago this week (the Swan and Railway).....

Eventually, bus arrived and after a bit of a drag, we were in Billinge and after a short walk, we were at our first pub of the day although a very peculiar sinister young man (possibly the village paedophile) tried to photobomb us, and then snarled at us when we said 'hello'.

I'm well versed at the "American Werewolf in London" style pub 'welcome' by now, and this was classic.  The whole pub stopped, fell silent and turned around, so I said "hi, hi, hi, hello, hello, hello" to each person/group until I'd confused them into thinking I was a local in disguise (more on that in Wigan later).  This was a absolutely fantastic pub from first minute to last.  A healthy crowd was in despite the weather and relatively quiet location, a docile dog slept on the floor, a yappier one jumped on it's owners lap and there was the reassuring woody smell of old, which you always get in the best pubs.  The decor was excellent, old gig tickets, beer mats & pump clips, a model ship, pots and jugs and plenty of St Helens Rugby League memorabilia.  A few people feigned interest in Manchester City v Stoke City on a average sized screen, a few references to "City" were inconclusive.  A gentle hum seemed to dominate the pub, one of those where everyone is really content in a proper local.  Interestingly, the fact a few stood at the bar when seats were available didn't bother me at all today!

We found a bus (same driver) to take us half way back on ourselves, to Orrell - though the pub actually seemed to be in a place called Tontine.  Even more confusingly, the pub was listed under Lancashire but it could have been Merseyside or Greater Manchester in GBG terms, but let's not act like it matters cos at this moment in time, it doesn't.

What DOES matter is that this was my 1,000th GBG tick and yes, I know I'll fall back below when I cross tick the soon-to-be-published 2017 GBG but for now, "celebrate good times come on!"  And what better way to celebrate than with a makeshift sign made out of part of a Sainsbury's own brand Special K cereal box?   It seemed almost inevitable the pub would be a slight disappointment, and it was.  Despite the fact that nearly everyone present was a no nonsense drinker, the pub was determined to push a foody slant (restaurant room empty out the back) that no one cared about.  I say no-one, but a child in full Liverpool kit ("full kit Twild wanker" as they are known) was shovelling chips into his mouth with a greedy yet monotonous regularity.  Tom was meanwhile perving (slyly in his opinion) on an insipid looking blonde waitress who looked like eating a bowl of chips would do her the world of good.  Having the door open and a through draught on such a chilly and wet day did nothing for the atmosphere, and my pint of Nova Foresta was heavy going.  Tom noticed our "bar area" had plastic cutlery laid out (as though they don't trust us bar scum not to try and stab ourselves/each other), we suspected the 'restaurant' had the proper silver stuff.  Dad panicking I hadn't rang just furthered my frustration (when will parents EVER learn that to receive text messages, you need to KEEP YOUR PHONE ON??!!)  It made us miss our train, and summed up a difficult pub experience!

At least Tom's travel expertise got us back to Wigan where he bought me a butter pie (SUPERB!) and a short train ride to Gathurst followed.  We then did a 20 minute canal path walk (slightly treacherous due to the heavy rain) to our next pub .....

I'd heard so many great things about this place, I was very excited, so perhaps a slight anti-climax was inevitable.  It all started superbly well (well, once we found the entrance on the street around the corner!) with a larger than life chap giving us a cheery welcome before disappearing, and a fantastic beer range (the likes of which I hadn't seen on a BRAPA trip in a while) allowed me to order a pint of Ella by the wonderful Mallinsons brewery.  Pint of the day.  When I said "Ella", all three barmaids looked up expectantly,  were they all called Ella?  What a co-incidence.  Anyway, it was nice to see genuinely friendly barmaids in a pub.  The pub was a hive of activity, a few dog walkers / canal boat folk had taken up the front bar but seemed to have problems keeping the dog under control so that cosy area was off limits as far as I was concerned.  No room in the back bar either, which seemed to be where the locals were, again looked a very homely room.  So we had to sit in the big area to the right which was reminiscent of an Ember Inn, and 'Christmas menu's' (£36 for the full thing) were on every table which made Tom recoil in horror as he won't even use that particular C word!  We tried sitting in the superb garden overlooking the canal but the rain just returned with extra ferocity, and the smoking balcony was uncomfy, whilst an underground bar area was bolted.  So we did try to create a great pub experience for ourselves, but it just didn't work out.


After the canal-walk back the other way, we popped in to the Gathurst Station Inn.  No cask ale, pretty disgraceful, bored and unfriendly staff, at least a nice but overpriced bottle of Britvic 55 was washed down with the news that City had beaten City 2-0 much to our delight/surprise.

Train back to Wigan, we decided to still leave some Wigan pubs for football days in the future, but did the one nearest the station which might be too busy on a football day......

Well that backfired, it was heaving!  Wigan weren't even at home.  I quite liked this place regardless, though Tom (with his love of trains and having heard good things about this bar) thought it was a bit tacky but as a novice, I liked the uniform train style signs, the departures board of trains and ales, and with a queue forming for the bar (spit!), I thought the staff did amazingly to serve so quickly and keep a smile on their faces despite the heat inside.  There was some live music through to a room in the right, where a grey haired hippie chap was wowing some female Prosecco drinkers with folky hits - had it been Donovan or Bob Dylan, I'm not sure it would have made a difference.  Sitting outside was certainly our best and only option.  A group of raucous men sat behind us, and with my green hood up, one peered in and asked me "enjoying yourself there Mr Tait?"  Errrrm what?  Was this a weird cultural reference we didn't get, or more likely, was his friend, an old man in a similarly bright green coat, the real Mr Tait?  Being Wigan, I didn't question it too much.  I expect strange friendly behaviour.  The rain really bucketed down and they all ran inside (despite having hats and hoods), not sure me shouting "bunch of pussies!" at them was wise but they probably didn't hear.   The rainwater helped take the hoppy tang off my excellent Neptune Triton.    Then the wind whipped up too and smashed a glass, probably wouldn't have happened with proper wooden benches + chunky pint pots.  But all in all, a good unique pub experience. 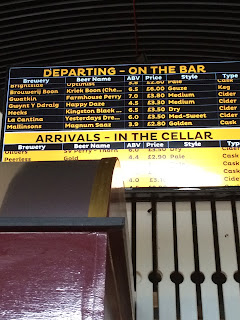 Next, we took the train back towards Manchester but whilst Tom had to stay on due to getting a connection, I had one more pub trick up my sleeve and said goodbye to him at Swinton where I hopped off the train.

After a good 10-15 minute walk through this typical outer Manchester town, I reached my pub and looking at it and the place, I think I'd have demanded my money back had it not been Joseph Holt's.

As I entered, I collided with a middle aged couple who were wedged right inside the doorway with their drinks and I did the typical "apologise even though not my fault" British thing.  The front bar was another heaving mass of jolly Saturday night drinkers - cheek to jowl I said at the time.  All I could do was find a serving hatch to the side where a threatening looking young scroat looked disapprovingly - possibly because I ordered a Chorlton Bootleg Ale instead of a Holt's bitter.  His two elders were friendly characters and moved conversation back to football to keep his mind off murdering me.  Just as I was debating where on earth I could sit/get out of the way to, I noticed a huge lounge area (typical of many Holt's pubs I've been to) without a single person in it.  Remarkable!  Maybe Leicester and Arsenal had bored everyone so much, they'd moved en masse to the room without a TV.  As I walked towards the corner table, 'Total Eclipse of the Heart' by Bonnie Tyler started up, and for a moment I felt like this was the most Mancunian/Swintonian pub experience anyone could ever have.  To add to that feeling, the toilets were full of "do not take drugs" signs and blue lighting on the hand dryers so scroats like the one at the bar struggle to find a vein when they are shooting up their smack.  But if they succeed, a pint of Holt's Mild takes the edge off (so they tell me).

Back to Manchester Victoria, should have changed at Salford Crescent had I seen Tom's message as I then had to walk to Piccadilly in time for the direct train to York which I made with 5 minutes to spare.

A great day, some very good and interesting pub experiences.  Probably won't get a midweek BRAPA trip in this week, so if the 2017 GBG is to fall on my doormat on Friday, I'll be "locked down" on 1,003 pubs whilst I start the cross ticking,

Have a good week, Si