Those lovely Sky TV schedulers know how to give BRAPA a boost.  Their decision to move Hull City's trip to Birmingham to a Thursday night gave me the chance to kick back and enjoy the freedom of a full pubby day for the first time here since August 2014.

The train journey couldn't have gone better, including the local connection from New St to Selly Oak, though quite why my first pub had the BR symbol in the Good Beer Guide when it was over a mile trek probably says a lot about encouraging people to go to a random Ember Inn in a pretty miserable area of the city. 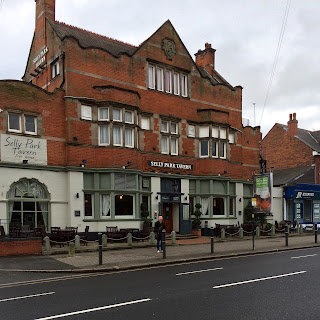 It was quite a grand red-bricked building from the outside, but that Ember blueprint was present from the moment we entered.  Fake fires, mis-matched non pub furniture, a familiar beer range (minus the Abbeydale Moonshine), and a friendly barmaid who was both Brummie and Eastern European made this almost identical to my Edenthorpe Ember experience a few weeks ago.  It was warm and comfy though, and to Dad who isn't familiar with this chain, there wasn't a great deal to dislike.  The problem was, there wasn't much to like either!  Tom joined us as I forced down a strong, rich Rev James ale (the first time I've had this on draught in over 4 years and I could see why).  My new pink jumper, having been inspired by the barmaid in Leavening last week, made it's debut.  There was a skittle alley out the back I read, I wish I'd gone to have a look as this would have offered a quirk.  As it was, a hot tap that wouldn't turn off was as exciting as it got in the "difficult access toilets".

A nice walk through a park, past Edgbaston and some allotments followed on a very cold Saturday lunchtime.  It was time for pub two.

This reminded me so much why I love pub trips to this part of the world.  A fantastic old pub with a superb green tiled corridor and a couple of private little side rooms where you can close a door behind you and block out the outside world!  Apparently it has the UK's biggest collection of cigars too but not seeing these hasn't, in my opinion, hampered my experience of the pub.  The pub has been selling cask since 1861, quite a claim so it was fitting I went for a Victorian Porter from Lincs.  In the safety of our superb back room (bell pushes n all), conversation turned to how to commit the perfect murder.  Interestingly (or not), on the other two occasions I've drunk this same ale, I've also been discussing murder I later found out!  Things settled down a bit and TV crime drama became the topic instead.  I just hope those bell pushes didn't record our chat.

A short walk north took us to Ballsall Heath for our third pub of the day, and I tried to encourage a friendly smoking barmaid outside to join in the photo, she was reluctant, but Tom just about got her....

Inside it was busy, friendly and ultra-traditional as we squashed in at the bar and I ordered a lovely Black Country bitter from Holdens, one of those great breweries you only see in these parts.  The barman was tall, South African, and had the menacing air of a darker Pistorious with two legs and no gun.  I don't think.  I was relieved when chirpy smoky barmaid returned and popped up just in time to direct me to the most confusing toilets of the day, outside then back in through an unmarked door.  Dad had taken up a place under a giant TV screen but the North London derby was really hotting up, and I was worried my new pink jumper detracted from Harry Kane's wonder strike.  Poor locals.  The food menu was cheap and curry based, and despite not being available to 6pm, Balsall Heath has it's own time zone and food was very much on the agenda, and smelt delicious.  But in the interests of BRAPA, I couldn't get distracted.  Then the TV went off just as the match was coming to a climax, nooooo, very Hole in the Wall, Hull 2004 in that respect except it didn't get stuck on a gurning image of Harry Redknapp.  Wonderful pub, best yet!

We then took a short bus ride up to Digbeth for our final pubs of the day.  The bus stop was right outside some superb old fashioned baths, so we had an impromptu photo session.

After some heavy handed bus conducting from a kind of 'bonus' conductor, we were crossing Bradford St to pub number four. 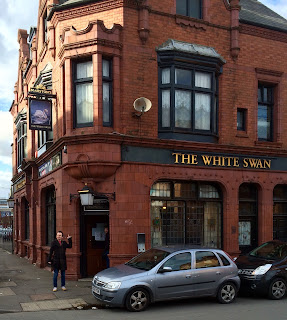 High hopes for this historic heritage pub, but it was sadly the weakest of the day, a bit lack lustre despite it's obvious charms.  Beer was limited to a couple of Marstonny efforts and whilst my New World Pale was superb, barmaid was totally distracted in the entire time we were at the bar, chatting to a local and it quite frankly came across as a bit rude.  Egg chasing and tennis lef us to decide that we'd be comfier in a back room a la our Prince of Wales experience but it was so cold.  I imagine heating a building like this it expensive but other pubs can manage it.  If I was you, I'd go to the Anchor down the road, well unless it's Valentine's Day and they have changed all their ales to terrible 'love' themed ones like in 2012!

I'm always a bit suspicious of pubs branding themselves 'Irish' but as this is a big Irish part of Birmingham (plus Whelan's in Asselby is so good), I needn't have worried.  This was my pub of the day from the minute I took my first glorious sip of Fixed Wheel IPA and we sat in the quiet back bar, which had a lovely mid afternoon gentle hubbub which certainly you wouldn't have got on a football day.  Thanks Sky!  What with Malton's Spotted Cow being my favourite pub last Saturday, I wonder if a Spotted Elephant is going to pop up in the Berkshire countryside next week.  They did then suddenly decide to gently 'illuminate' us by putting the lights on.  This had happened in the White Swan too.  Do Digbeth pubs like to keep a close eye on their pub visitors?  For fans of Peaky Blinders, I could imagine the Shelby gang having a nice quiet pint in here, providing they left their razorblade clad flat caps at home.  A wonderful pub experience, you must visit before you die!

My GBG App hadn't plotted the next pub's position very well at all.  Typically, the weather had taken a turn for the worse too, but perseverance paid off up New Canal Street and after what seemed like an age but was probably 5 mins, we were at the last pub of the day.

It was another hit on a day when the standard of pubs had been superb.  I guess the people of Birmingham must take for granted the wealth of brilliant pubs available to them.  As Dad said, certainly no need to return to the Wellington again when a couple of minutes extra walk gets you to a pub like this.  More great local ales were available, not sure I can count a 5.6% Shropshire porter as locale but I'll try.  This pub had a slightly younger, vibrant vibe than the others, but not in an annoying or threatening way.  In fact, using the pubs own condiments to season my smuggled pork pie shows just how relaxed (drunk) I felt by this stage.  The music was peculiar, one song particularly stood out, a Gothic version of the "Are You Being Served?" theme.  I felt a bit safer in the knowledge that the people on the table next to us were totally wasted, as I tried to figure out what made this pub's recent refurb so environmentally friendly.  Top pub!

And there you have it.  After a bit of coffee and nachos, the journey back to York flew by as I slept through most of it and listened to my music.   West Midlands moves up to 7th in the BRAPA league table, jumping 4 places above Durham, Tyne and Wear, Lancashire and South London.

Midweek South Yorkshire is on Wednesday this week due to pub opening problems, it might not be til Friday when I write that one up so I'll see you when I see you.  Happy pubbing.