Having aggravated my foot injury of December (which as we know, I don't like to talk about!) on the crazy Aldworth walk last Saturday, I was grateful of a low key night in Hull where I'd decided to go along with Dad to see us (presumably) 'thump' Nottingham Forest at home .....

It was a chance to take in Hull's latest real ale pub, surely a good pre-emptive tick for a future GBG. 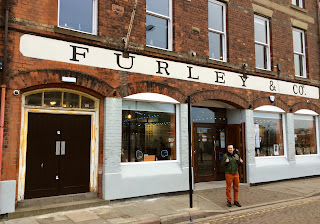 Situated opposite Princes Quay and Princes Dock, this appeared to be one of those big former warehouses converted into a modern day pub, the type of which you see in places like Manchester and Leeds but never before in Hull, which is pretty much the city at the end of the earth.  We were joined by BRAPA royalty Mark "Hull CAMRA" Bainton and Christine "head-cold" Andrew, for what felt like the most authentic Hull City pre-match session of the season.  The barmaid was young with chiseled teeth, and took an age to get our drinks, not helped by me asking "which beer is coming next?" and a complicated iPad calculator/cash register machine.  We sat in a large, glass window (I taught my older friends what Nandos, opposite, was) and was reminded of Pub Curmudgeon's ace blog Drinking in a goldfish bowl.  Dad even used the term 'goldfish bowl', whilst Mark made a dodgy counter argument about women in Amsterdam windows, though these aren't pubs.  The ales were good quality, even the Magic Rock coming towards it's end, but there was a wider range of 'craft' ales, served in 2/3 Schooner measures at high prices and low temperatures.  The toilets were very quirky (see pic above) but comfort wasn't great (think Chemistry lab minus bunsen burners), there was a great snack counter with scotch eggs as big as my head and crazy flavoued sausage rolls which we returned for post-match to drown our sorrows (better barman this time).  Conclusion - it's not the best pub in Hull, but a welcome injection to the scene.  To me, it should be in GBG ahead of St John's Hotel, Sailmakers, Hop & Vine and Larkins. We'll see!

Middlesbrough & area write up to follow.  It's Saturday afternoon and I'm not in a pub, my liver is rather confused.