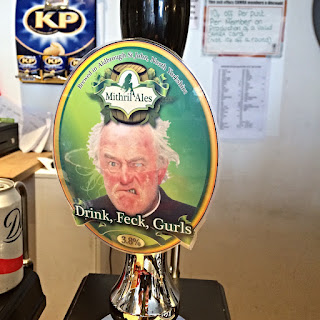 The clocks may as well have gone forward two hours, as my train to Scarborough was delayed by 40 minutes approx, and it was freezing on York station as the waiting rooms were choc-a-bloc with whining London families returning home to bolt their mansions against Storm Katie.  The only consolation, my train ticket only cost £1.60 due to a longer delay in Manchester a few months ago!!

Anyway, welcome to day two of my three pronged Easter North Yorkshire challenge. My connection to Filey still 'made', and after an eventful journey where I waved to a heron, some quad bikers and a 13 year old girl without being arrested, I was at my favourite coastal town in North Yorks.  Last time I was here (Jan 2013), it was deep in snow and I can assure you, today was even colder.

A phrase you don't often here on entering a given pub is "ooh look, it's a headless skeleton .... oh no, it's yer Grandad!"  This classic quote was courtesy of Auntie Star to the blonde child Lucas.  It's a pub cliche to say "it was like walking into someone's front room", but I've rarely felt it as much as here.  Daddy Star (a polite man with basic social skills) served me an excellent Black Sheep Special, but I'd walked straight into the lion's den and was surrounded by various members of the extended Star family, with grandson Lucas being teased about whether or not the Easter bunny had left him anything.  Even the army of young brunette waitresses seemed part of this 'cosy' family scene, I tried to look relaxed next to the annoying fake bookcase wallpaper, but felt far from comfortable.  Whilst Lucas showed anyone who cared his damaged wrist, Nana and Grandad Star were presented with a huge Sunday roast which could have fed the whole pub.  If my Mum had thought Cropton felt a bit cliquey yesterday, she'd have been horrified by this.  But when it all calmed down, I was left missing the entertainment laid on by Filey's best pub family.

After a bit of impromptu sunbathing on Filey station, I hopped on a train back to Scarborough where I'd noticed two new pubs in the 2016 GBG, a Wetherspoons and a Micropub, and wondered how long til the Good Beer Guide will be 50/50 split with these two types of outlet?

Good job this was a vast multi-levelled JD Wetherspoons, because it was heaving with people taking advantage of the four day weekend, many looking like they were in it for the long haul as you often find with JDW clientele.  There is, of course, a "beer festival" on at the moment which as far as I can see, seems to consist of putting a few more beers on than usual, and errrm, nothing else!  To be fair, a member of staff who belonged in panto appeared from nowhere to sell us raffle tickets to win a huge egg, and then performed a magic trick on a little girl, which seemed to traumatise her.  I'd wandered into a slightly raised quiet side room (if Spoons do side rooms) and the only seat I could find was a huge table seating 8 in the sun so I felt a right bastard and couldn't relax for fear I was alone in the prime seat in the pub!  It was therefore something of a relief when a family of 4 were joined by two hangers on and decided to upgrade to my table, so I volunteered to 'downgrade' to their old table of 4.  My sense of being a good Samaritan was short lived.  An old couple next to me on a similar table of 4 were brought scones and tea, and immediately decided to downgrade to a table of 2, for NO REASON.  Then the only other couple in a table of 4 decided to leave!  This was musical chairs at it's best, how long before I was in a cupboard under the stairs?  The pressure was taken off when a Jamie Vardy/Harry Kane hybrid called Luke (no lumberjack shirt though) tried to impress his girlfriend by buying a raffle ticket off our magic man, who made a Star Wars/Luke joke that didn't go down well.  It was that kind of pub, but a classic Wetherspoons experience you can all relate to.

The busy nature of the 'Spoons meant I had misgivings about embarking on a micro pub adventure, but it had to be done .....

Controversially, this place hasn't been officially declared a micro pub despite adverts everywhere saying it is one.  Not sure who makes the final decision.  Maybe Mr Hillier had a bad childhood experience on holiday in Scarbs where he was buried up to his neck in sand?  Anyway, this was classic Micro (think more Dr Phil's than Twisted Lip, but still good).  It was busy as expected but free cheese and crackers (and very strong pickled onions) were on at the bar and softened my mood.  My decision to photograph them led people to question whether I was a food hygiene inspector, so I proceeded to eat as much as I could and look slightly disturbed.  There were no seats so I had to stand at the bar and take the full force of the "banter" between jokey landlord and the main "character" local, it was somewhere between Ken Dodd and Lee Mack, 'chuckle-able at best!" (not Chuckle Brothers).   At least I was made to feel included.  A happy friendly atmosphere.  I felt sorry for the nice man on my left, just trying to enjoy a quiet pint who was sent off to the local shop to buy some Jacob's Crackers when they were running short, mainly cos of me! I think he was refunded.    I tried a decent Father Jack beer from the North East, and then a swift half of a Milton from Cambridge, excellent ales and I'd have to say, a bit like the 'Spoons, above average in it's pubby field!

I'd been fortunate to avoid the rain, and after getting a coffee at the station to keep my switched on to write up this blog, I was back in York no problems at all.  Right, time to rest up before Day Three of my North Yorkshire challenge tomorrow.  Nice to finally be making some inroads!

I once read that the true meaning of Easter was a free pint of Banks's Bitter.  If that is true, I hope you all got yours.  Until tomorrow evening, farewell.