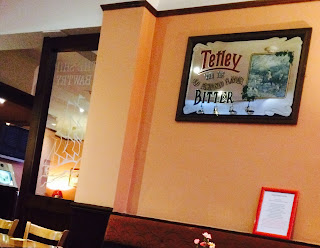 Evening all, hope that headline drew you in!  Of course, it wasn't quite as exciting as all that on Wednesday night as I once more found myself in that friendly/threatening outer Doncaster corridor.

The Donny bus station muzak CD seemed to have been stolen, and my bus driver was so relaxed, not only were we 10 minutes late into Bawtry but he'd have quite happily let me use my Donny PlusBus ticket all the way to Worksop had I wished.

Bawtry seemed a strange place for South Yorkshire.  It appears to have been shuffling towards Nottinghamshire over the last few years, embarrassed by it's roots, but not quite able to make it across the county boundary.  With it's set back market place and main road running through the centre, it felt more like one of those North Yorkshire villages around the Northallerton area.

The pub was eerily quiet on arrival, and I managed to embarrass the older of the two barmaids by accidentally catching her singing to herself.  I'd actually thought it was the central heating kicking in, but etiquette prevented me from criticsing her "dulcet tones".  I'd come straight from work, so with the Auckley "chef mistaken identity" incident still in my mind, I'd thought ahead and popped to the loo to change into less chef like clothing!  When I returned some 3 minutes later, it was like walking back into a different pub.  Now, a third stern barmaid was presiding over a local community of drinkers, you know the type "Your usual pint of Fosters, Frank?  White wine spritzer Rita?"  Had I walked into a different pub dimension?  The new barmaid was eyeing me with much suspicion, where HAD I appeared from?  I returned to the corner and drank one of the three Marston's beers that were on (4 are always on according to the GBG).   Excellent quality Burton Bitter, I might add.  The pub had a couple of nice old mirrors, but I can't help feeling that a recent attempt to modernise it has made it lose something of it's soul - it lacked the magic of Barugh Green and Auckley.  There was a growing hubbub though, and original barmaid reappeared to sing "happy birthday" to no-one in particular, then she sang an old Pizza Hut advert, finishing with a jaunty dance and ditty about a boy falling off a boat (or something odd).  Not so embarrassed now are ya luv?

Back in Donny half an hour later, I was looking for my final 'tick' in the town, the Marketplace Alehouse and Deli, but it was all boarded up!  Nooooo.  I had to scroll through their twitter to find out they'd (very recently) changed their opening hours to Tues, Fri and Sat only.  So had I stuck to my usual Tuesday plan, I'd have been okay!  Typical.  No harm done though as I need to return for one final Donny bus trip in a few weeks anyway so I'll do it then.

No midweek BRAPA for next two weeks due to family demands/nice events so I'll be back in the Barnsley area on 29th March most probably.  But now I need to sleep cos I'm on the 6:01 to Laaandan Taaarn tomorrow morning.  Phew, BRAPA never rests for long.

Have a good weekend all, Si