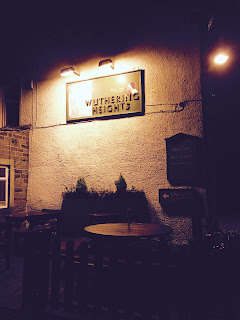 "Out on the winding, windy moors, we roll and fall in green" I'm singing the Alan Partridge version rather than Kate Bush as I write this, but I'll spare you the karaoke session.

Determined to crack on with BRAPA in the new year (probably a reaction to all this dry January nonsense), I found myself squashed like a sardine on the notorious Leeds-Skipton commuter train after work, where I was after my penultimate West Yorkshire pub tick.

Standing to Keighley and then walking to the bus station was not good for the recovering ankle (which I'm not mentioning) but the whole evening was fraught with risk, as buses to and from Stanbury stop running before 6pm, leaving me potentially stranded, but this adds to the adventure!

This was my first visit to Keighley bus station and with muzak even more serene than the Huddersfield equivalent, I soon found myself dozing off in a berth at Stop L, only to be woken by the bus engine starting up ready to blast off into Bronte country.

The bus was quite busy but once we'd negotiated Haworth (nice to see it tourist free in the dark for a change!), I was the only passenger left and pressed a bell before the driver terminated me first!  The pub was luckily just across the road.

If I'd had my pre-emptive crystal ball with me on Yorkshire Day 2014, I'd have visited this at the same time as the solid Friendly and the now de-guided anti-climactical Old Silent Inn.  The pub name seemed to playing on the Bronte thang, so I was expecting some below average food orientated tourist hole,  How glad I was then to walk in and see two old locals, a dog and a bored looking landlord in a small cosy low beamed lounge with a wood burner in the corner.  The dog, George, made the biggest impression as he drank water very loudly from a bowl on the hearth which must have been a lot warmer than my excellently kept Blonde Witch, served happily in the appropriate Moorhouses glass.  However, I only had to glance to the right to remember not all was proper old locals pub as a laptop had been hastily set up so visitors could watch a 'Samuel Goldwyn Wuthering Heights' presentation.  The locals were quietly friendly but the landlord looked suspiciously at me, especially when I eyed up his smiley blonde daughter who'd come to work behind the bar and bent down to stroke George.  I couldn't relax fully ala Kirk Smeaton as I had no phone signal or bus back, so as I went outside to phone for a taxi, I conducted a social experiment and left my GBG and BRAPA paraphernalia on the table for all to see, so when I came back in, they could engage me in conversation.  It didn't happen!  Even more unlikely, the taxi chap hadn't even heard of the Wuthering Heights but when I said it was on the same street as the Friendly, he knew exactly what I meant.  15 minutes later, he'd arrived and I said my thanks and farewell, handed my glass to mine miserable host, and left for good.


Despite not being a 'pub man' the taxi driver was a great chap and I definitely recommend Oxford Cars if you are stranded in the area.  I was back in York (via Leeds) for 8:30pm which I could've only dreamed of when I was envisaging wild, windy walks to Haworth and beyond in the dark!

Only one West Yorkshire pub left then, hopefully next Tuesday/Wednesday, can hardly wait.  I was in this position last August but Wetherby's Muse and the 2015 GBG was cruelly snatched away from me on that occasion!

And whilst we are on the subject of midweek BRAPA, I've identified 3 North Yorkshire trips I can do on evenings before we crack on with South Yorkshire in February.