Finally, I ticked off my final West Yorkshire pub in the 2016 GBG.   There were no party poppers, balloons or guard of honour.  But it wasn't that kind of pub.  And I'm glad.

I was joined by Karen L from work, who used to live in Stanley and 'volunteered' her long suffering hubbie Kevin to drive me there (saving me much bussing and training), and she gave me a commentary of all the local landmarks from Rothwell's slip road to Oulton Hall Golf Club and their scandalous 'points' system driving (driving!) the members away.  It was all very instructive.

Despite having lived here, they'd never been in the Graziers before (scandalous as it turned out) and decreed that I should enter the pub first because, in Karen's words "if the local scroats kick off, we can scarper first!"


I was confident going in first, having heard positive reviews from fellow blogger retiredmartin.  No scroats here, though the first thing I saw was a pool table, which doesn't normal scream "classic real ale pub".  It was being commandeered by a young man with the type of hairstyle that hasn't been fashionable outside of Stanley since 1972.  He's been playing against himself for ten years now, and is yet to lose a frame!

A tardis like effect was evident here as the pub snaked round to a cosy main bar, with a real fire (there was another at the front), some snazzy wallpaper to match the hairstyle, quirky decor, old photos of Stanley, proper pub bench seating, oh and well kept Abbeydale Moonshine was on so it's fair to say I was in my element, especially as some kindly locals apologised for blocking my view of the ales which emphasised just how far we had come since the Crown and Shuttle in East London.

There were some nougat chocolates in a bowl on the bar with a "help yerself" policy, someone had brought too many back from a holiday in Eastern Europe - mine was called "Michalki Kokosowe", very nice!  I did ask if it was cheese at first, so was actually disappointed. 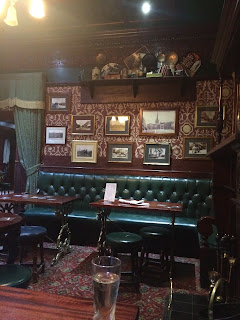 We sat by the fire admiring the above view, and Kevin was in the chair to buy round two, a darker but very drinkable Beauty Hills from somewhere in Shropshire.    This pub was a microcosm of all the classic aspects of WY pub ticking which I've been enjoying on Tuesday evenings since April 2014, and it was nice to have some BRAPA debutants to enjoy this monumental event.

I even got a lift back to Westgate station which was above & beyond the call of duty, but my luck obviously evened itself up as I missed trains at both the Leeds and York ends by a matter of seconds.  So it was time for a pretty dreadful Big Mac meal and to reflect on a good night, I just wish I hadn't had "Perfect Moment" by Martine McCutcheon in my head all the way home.

p.s. my midweek strategy for the next 3 or 4 weeks is a few achievable North Yorkshire ones before I start the big South Yorkshire pub in mid Feb.  I've got my dirty vest, hand me down toothbrush, crew cut and 6 pack of Stones ready to go,  and with that kind of stereotyping, how can I go wrong?