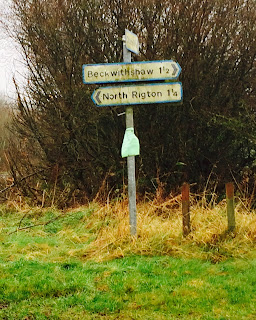 Surprise, surprise, it was pouring with rain as we arrived at the car park of our first pub just a couple of minutes before 11am opening, Dad back on his BRAPA chauffeur duties which served me so well in 2015.

I wouldn't have fancied the walk in this weather, and Dad's SatNav which has an excellent sense of humour had us on winding, hilly country lanes, thick fog and at one point, "flying slop" as an old woman shovelled some muck into the street and looked outraged as our car nearly collided with it. 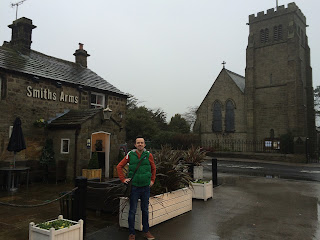 We sheltered from the rain in the entrance until the 11:01am official opening, but when the barman unlocked the door, he didn't even register a surprised smile to see us standing there - maybe it happens every day, or more likely, we are in rural North Yorkshire meaning of course that bar staff are not allowed to be friendly and they are doing YOU are favour for simply existing (I'd like to state this isn't true once you get as far north as, say, Northallerton).   Another rural North Yorkshire tell tale sign was the "geared up for food" feel with the kind of chairs and tables that were never designed for pubs, though comfy enough.  The warmth and log fire, plus a decent pint of Yorkshire Gold and some good conversation actually meant this turned out to be a good pub experience, though a mirror menacingly advertising Valentines Day meals made me realise that I was glad we were in on a wet Saturday morning, having the place to ourselves, and the fleet of cars arriving just as we were leaving only reinforced that.

2.75 miles to the west (you can't fault my maths!), and we were in North Rigton which looked to be a beautiful village, quite picture postcard.  Dad had taken Mummy Ev on a 'date' night here some 42 years ago but any thoughts of it being unchanged in the intervening time were always unlikely.

As predicted, a young waitress tried to thrust a menu into our hands on arrival. I said "we're only here for a drink if that's okay?" and luckily we weren't ejected, and there was no rugby tackling me to the floor a la Guinea in Moggerhanger.  Our barman wasn't very good at counting money but the beer range was slightly wider here, I like Ilkely so went for a nice standard Joshua Jane though sadly I started to get vinegar as it got towards the bottom.  The place had a light welcoming feel with more ridiculously 'non-pub' furniture, but it has to be said it was quite soulless and Dad couldn't recognise it from his 70's visit.  Groups of middle aged women and excitable kids did nothing for the atmos, though Dad was jealous of one girl's Frozen leggings which are now on next year's Christmas list.  Finding the toilets was like undertaking a slalom, dodging chairs and tables, they were hidden away with the pub going in a large circle, reminding me a bit of the Falcon pub near Clapham Junction.  And talking of the loos, the decor of women's bum cheeks seemed uninkeeping with the rest of the pub's feel.  Similar loo decor in York's Phoenix works a lot better.  I don't think this will be a pub of the year contender, but at least the staff gave us a cheery farewell which always gives a bonus point in my eyes.


Our final new pub was west of Wetherby, in the even harder to reach Sicklinghall which doesn't seem to have a bus service so another great 'tick' to get done by road. 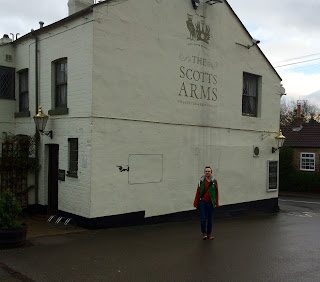 This was more typical of a traditional pub, I was pleased to note, and a separate upper drinking area to the left meant we didn't need to mix with downstairs diners, which was fine because for now, it was mini cheddars and Tim Taylor Landlord all round.  One of those pubby quotes on an old beam proclaimed "poor and content is rich enough", whoever wrote that hadn't order 2 pints and 2 pack of mini cheddars in here as I called my bank to arrange a mortgage.  The place reminded me a bit of Chequers in Ledsham as middle aged locals kept arriving in Jags and Barbour jacket, swaggering around with an air of self importance, or as though they belonged in an episode of Midsomer Murders.  The bar though did boast one of the best selections of proper old fashioned sweets I'd ever witnessed in a GBG pub and had the mortgage come through, I'd have stretched to some dolly mixtures.  In pub terms, this was the nicest of the three, but once again, the (usually reliable) Tim Taylor Landlord had gone all sulphury three quarters of the way down.

We'd done so well time-wise and with bacon sandwiches waiting at home, we had time to drop in to York's wonderful Fox on Holgate Road which was neglected for years despite being an obviously amazing building, full of little rooms.  Since it's takeover by Ossett, it now has amazing beer too plus friendly staff, but then again, York isn't technically in North Yorkshire.  If this had been a BRAPA tick, it would be an early contender for pub of the year.


And that was that, bacon sandwiches and a bit of Soccer Saturday and we'll now wait to see what Hull City get in round 4.  It'll have to be something pretty amazing (away to a lower league club who don't bore me!)  to stop us having another day like this.

Meanwhile, next week could be quite momentous with plans to finish both West Yorkshire and Bedfordshire for the first time, fingers crossed.