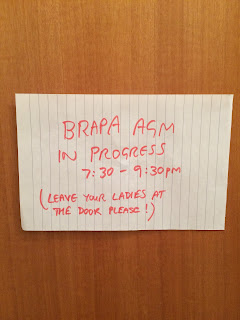 7:30pm on Monday 18th January 2016 and the 'shareholders' (a selection of the aristocracy - mostly Lords -  and the host, that's me) gathered for the second annual BRAPA Annual General Meeting as views were aired in a bid to improve the overall experience of the British Real Ale Pub Adventure in 2016.

Food and drink was an offer - no beer or meat, we're not animals!  Instead a civilised 2009 Rioja was served up along with a selection of cheese, crackers, chutney, olives and tomatoes whilst 4 episodes of "The Thick of It" were watched back to back to get everybody in an argumentative mood.

Here are the minutes of the meeting.

Colonel Albert Fluffikins was the only notable absentee, no one can forget last year's AGM where he single handedly ensured proceedings finished only 10 minutes in after scratching all the furniture and demanded to be fed and played with.  He was actually banned this year from attending.

Simon's attempt at an Orwellian "Moon Under Water" worked out better than expected with the 'Green Owl' blog.  It is now to be taken a step further as a virtual Green Owl is going to be built .... out of Lego!  Simon warned that it would be a somewhat abstract interpretation but photos will be posted on Twitter once complete, and it was a "therapeutic" exercise.  Lord Dawkins humourously noted that Tom would be upset there will be no lego Rachel or Emily.

It's been a great month for BRAPA with East Yorkshire (for a second time), West Yorkshire and Bedfordshire now all completed.  Not much thought has gone into it but Walters in Hull, Three Pigeons in Halifax and the Black Lion in Leighton Buzzard were all given special BRAPA lifetime achievement awards.

Lord Wagstaff stood up and demanded to know what direction BRAPA was taking next with these counties done.  Simon confirmed both Berkshire will be the main focus starting in mid Feb but there would be trips to London,  Lancs, Great Manchester, West Midlands and the North East to come in the next few months.  He also declared that North Yorkshire was going better than expected even if progress seemed to be painfully slow.  Lord Marley sneered at this.

Lord Chilton hushed the assembled party by mentioning the top secret strategy initiative "Operation Pizza Cutter".  Simon was flustered momentarily, but regained his composure to state that no official announcement would be made until June when all the key parties had been consulted, but no one should be concerned or even mention it again as changes would be minimal!  Simon also took this point to remind all members to re-read the CODE OF CONDUCT regarding strategy.

Lord Hernandez thought the Challenge should be renamed GreatBritish Real Ale Pub Adventure and all branding changed to GRAPA.  He was told to stop being stupid and sent out of the room to think about his actions.

Lord Albion-Albion-Albion asked in a timid manner that now West Yorkshire was finished, would Tuesday night BRAPA continue?  To much applause, Simon announced yes and from mid-late Feb, South Yorkshire would be the focus starting in Armthorpe, which is near Doncaster.  Until then, there are three viable North Yorkshire nights to complete - tomorrow, Wed 27th Jan and Tues 2nd Feb.

Lord Fauntleroy remembered that March might be a good month for Simon to start applying for his "Nitwit" National Rail card with April trips to Berkshire not yet booked but imminent, as it will help with local train travel discounts, Tom is likely to advise further.  The Feb and March trips are booked.

Yes, the first big away trip of 2016 is due in April with at least three overnight stops combined with Hull City's trip to Reading.  Has anyone been on holiday to Reading before? asked Lord McShane.  This question caused much mirth from the assembled crowd.  Newbury and even Swindon might be better areas to be situated for some of the time, but this could be a great opportunity to get a lot of Berkshire done.

Another blog that Si thought was rubbish but created some interest was his BRAPA music selection, so much so that he is currently working on a plan to make it available to all in playlist form on something like iTunes or Amazon.  All we need is feedback.  Speaking of which, in a few Monday's time, the "difficult" second album track list will be reviewed on the blog.

In one of the less boring points on the agenda, Lord Bradford-Bury asked if there was any truth in the rumour that some BRAPA clothing would be released.  It is true!  2 t-shirts (one olive green, one TBA) one and a rather sexy red tank top, complete with great beery font.  Preview on Twitter tomorrow.

Just to bring the mood down, Lord Mark-Robins reminded all in a boring voice that since the "archives" have been completed, Simon was supposed to be logging every real ale pub he's visited past and present, with the date first visited.  He's got up to Essex so far, it is slow going though and he's been sidetracked by playing pool and watching Eastenders and reading Tudor novels.  Si commented "I have until September, Robins out!"

Lord McManamanaman thought Si should definitely check BRAPA pubs are open after recent 'scares' in Harpenden, Whitton and Greasborough.  Simon agreed he was foolish to overlook this.  Lord Fowler meanwhile thought Si should always check if a pub has a Twitter account so he can mention them when he Tweets like he did in Ikley's Flying Duck and the Bingley Arms to good effect.  Simon agreed he'd try and get into a routine but didn't see it as ultra pressing.

Lord Tadcaster-Bridge said that whilst on the subject of social media, was it true Simon was considering a shock return to Facebook?  Si was a bit coy, saying if he did, it'd be as a "group" and he'd had quite a few people at work / family members etc who don't do Twitter and want to see what's going on, but are they perhaps just nosy?  It'll be considered.

It was knocking on 10pm, much wine had been drunk, and the Lords went to fetch their Ladies from the "female friendly" gastropub next door.  Until next January, keep BRAPping.