BRAPA is ..... WAITING FOR A STAR(BOTTON) TO FALL : North Yorks Getting Close 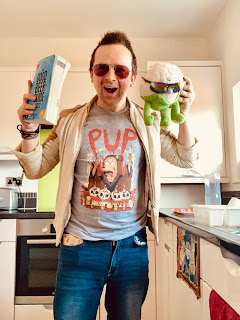 This was my optimistic, sunny outlook, 10am on the final Saturday in March as Col donned his 1998 fake Oakley wraparounds, and I put on the iconic long blue shorts (or short trousers if you are a cheeky lager based parody Twitter account) for the first time this year, but perhaps also a final time due to an unstitchable holey button scenario.
A gentle day was planned, I still wasn't fully recovered from my Hampshire exploits at the beginning of the month.  Three of my remaining four North Yorkshire ticks to be done, the fourth (Appleton Wiske) agonisingly just out of reach due to their failure to open until 6pm every day of the week apart from Sunday, the absolute monsters!
#DaddyBRAPA, the king of North Yorkshire BRAPA, whizzed the BRAPmobile into the parking space at BRAPA Towers, and we started the agonising drive to the Upper Wharfedale outpost of Starbotton, 'twixt Kettlewell and Buckden.
Had I the presence of mind to plug the route into my Google Maps earlier, she would have told us to go around Harrogate and turn north before Skipton, passing Grassington and Appletreewick.
But we didn't, so we headed up past Leyburn, turning south near Aysgarth.  Ooh it was painful!  SatNav lady, having being shunned earlier, chose not to speak to us for the entire journey.
The village of Starbotton was a Postman Pat Greendale-esque gem.  Peaceful beauty, basking in the sunshine, the only noise coming from a few nesting jackdaws on the adjacent roof plus a background hubbub coming from the smattering of tourists / walkers who were catching a few rays in the beer garden. 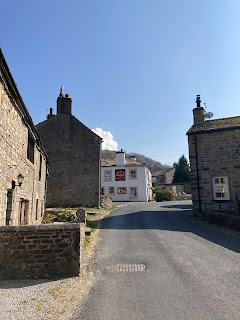 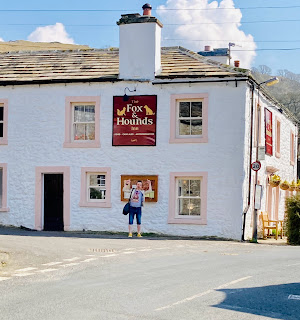 We enter Fox & Hounds, Starbotton (2133 / 3696) and approach the bar, feigning my usual 'out of breath / been walking for miles' demeanour, which I don't think has yet impressed or fooled one Yorkshire Dales publican.  As I pause to survey the four ales before deciding on a Wharfedale Yorkshire Blonde - yummy, crisp, clear and cool, sparking with the effervescence of Ada Shelby in an evening gown (Untappd doesn't deserve me), who should bloody pipe up for the first time today but SatNav lady?!  "TURN RIGHT TO REACH YOUR DESTINATION" she bellows.  Even my deaf Daddy heard that. Thankfully, the landlady is a jocular type and sympathises as I explain she's not said a word since we've left York.  Of course, this has totally destroyed the pretence that we'd walked miles to earn this pint.  Cheers SatNav, I won't forget this.  A glance at the pub interior convinces us that this is an 'indoor pub' no matter how nice the weather.   Dales-trad to a large extent, a dying breed?  We settle down in the corner, content.  The only incident of note after that is a Mum with giant family.  She seems to be the designated drinks buyer, and she's never out of the pub, constantly getting top up Fruit Shoots, coffees, ice, water, whilst her whimpering dog can be heard against the wind, pining for her return.  The pubs in this part of the world back in 2017 when I first completed North Yorkshire were generally unimpressive, but the standard of Dales GBG pubs in 2021/22 has been superb. 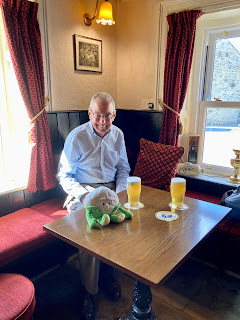 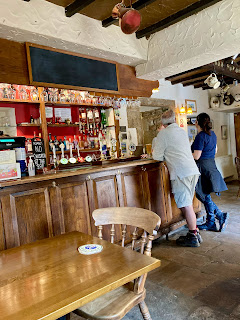 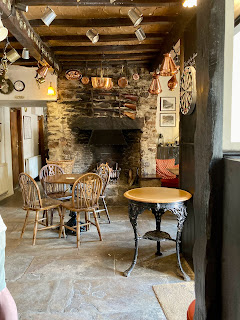 We (especially chauffeur Dad) couldn't relax yet, the journey up to Low Row being similarly arduous, situated as it was north in Swaledale, close to Reeth and Grinton's Bridge Inn (famous for a classic BRAPA falling over moment - I was trying to pose outside for a photo. slipped on the raised curb, blood dripping from my leg through a hole in my jeans for the rest of the day!
The scenery was even more breathtaking up here, as we park on the main road and walk up a raised path, where the pub is set back overlooking the hills. 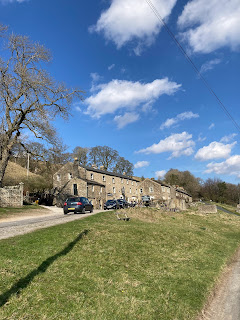 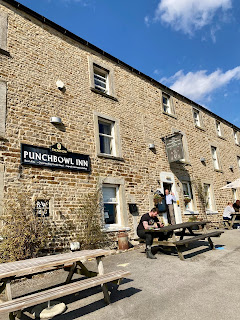 The gent who greets us at the Punch Bowl Inn, Low Row (2134 / 3697) is full of life and possibly American.  I go for a quick widdle and my button pops off yet again, nearly disappearing down the plughole.  I just manage to catch it!  Our host is telling Dad (enquiring about coffee and possibly also on a scouting mission for future walking holidays with #MummyBRAPA) that all twelve rooms are booked up.  Hard as I try, I cannot find the mouse carved into the wooden bar counter, as is the way with Mouseman furniture, but I was possibly being as blind as one of the three in the nursery rhyme.  Dad was surprised to see that I'd taken our drinks outside.  No it wasn't  because I was sulking at the lack of wooden mouse, or that I had a desire to rub shoulders with bikers and gothic dog lovers, but the pub wasn't particularly homely like Starbotton had been, and the scenery was so spectacular, it made sense.  The Buttertubs ale had a very surprising kick to it, a bit like if Arthur Shelby tickled your throat gently with a razorblade, but then put his arm around you and poured you a whisky and said "you're alroite young Soimon heh heh heh" before snorting something funny up his nose. 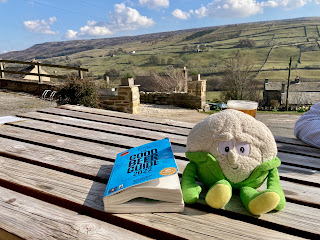 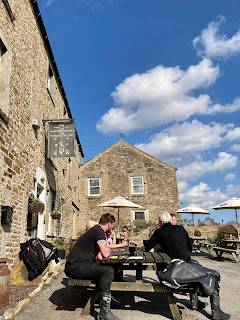 The hard part of the day was done, journey wise, and Richmond was not too far from Low Row, AND in the right direction for the main road back towards York. 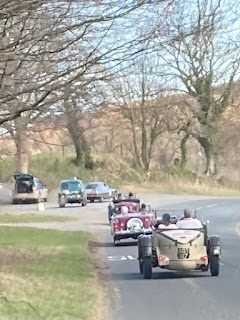 RetiredMartin is always amazed at Richmond's ability to produce a new GBG entry every year, and I'd have to agree.  The town is obviously trolling the tickers, a bit like Reading used to circa 2016 and more recently, Portland, Lyme Regis and Buxton.
After finding an overflowing public car park on the outskirts (one hour stay allowed), we stride towards the pretty marketplace where the pub is located ...... 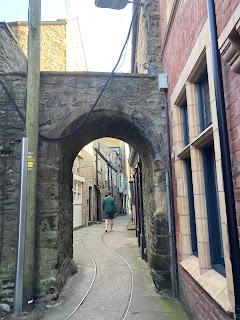 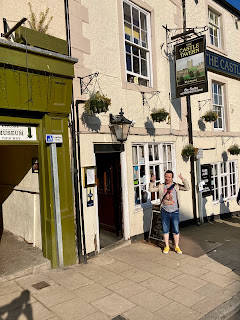 And Castle Tavern, Richmond (2135 / 3698) is up there with the Holly Hill for me as the most satisfying of the many Richmond ticks in recent years.  A sturdy, comfortably furnished, dimly lit narrow place of some age, this is what I picture in my mind's eye when someone says the word 'pub'!  Too narrow for one bloke however, who managed to be an utter nuisance throughout.  He seemed incapable of sitting in a seat, so he crouched on the floor at a variety of impossible poses which suggested he was playing an invisible game of Twister, alone.  He spoke to anyone close enough to him, luckily not us, 'dogs' were his main conversation topic and he even tried a few 'jokes' out, I can't recall any, but he was like a less successful dog themed Tim Vine/Milton Jones pun-a-thon,  causing a previously gentle old bloke to groan, and grind his teeth in frustration.  Meanwhile, we'd got this delightful and quite unique seat for two at the front of the pub.  The atmosphere was generally relaxed, and more lazy Sunday afternoon than Saturday, if that makes sense.  The local Red Rufus ale was a triumph too, deceptively dark, with an inner strength, but an overall soothing warmth.  A bit like the ghost of Polly Shelby telling you there'll be a war, someone will die, but it doesn't really matter cos like a good Mum, she's managed to sew the button onto your favourite pair of shorts. 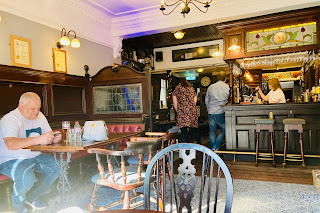 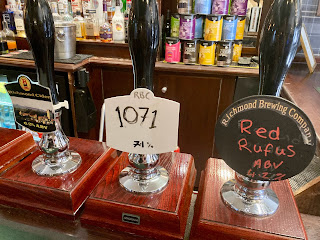 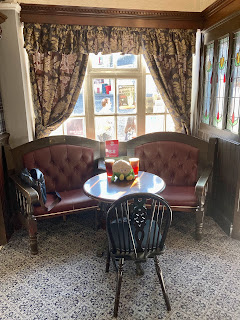 This was my first BRAPA trip on my new Keto diet, so I had to settle for an organic (probably) scotch egg, hope it was grass fed, can you grass feed a scotch egg?   I also allow myself a small piece of leek flan (it is only thin pastry Dr Berg, don't judge me!) , but Daddy BRAPA could do exactly what he wanted, and as I span around seconds after leaving this pub, I saw he'd located the local pie shop, and tried not to feel jealous when he emerged with a black pudding pork pie.
And then for the drive back to York, where we popped into our favourite local The Fox, up at Holgate, where I forgot to take any photos on this occasion.
It had been a lovely day out, thanks to Daddy BRAPA who has also helped me hatch a future solution towards that tricky Appleton Wiske conclusion.  Legend.  The fantastic weather didn't exactly signify the start of spring, never mind summer, as by the following Friday, I woke up to a covering of snow, but we're getting there!
Join me, probably on Sunday now cos I'm at a gig tomorrow, for news on a Thirsty Thursday trip to the Lancastrian / Merseyside border.
Take care, Si