Let the BRAPA 8th Birthday celebrations commence!  There'd been no jelly and ice cream on the 6th and 7th Birthdays, only sobbing and blank stares out of the window wondering if pubs would ever open again.  "This is the death of pubs" said the doom mongers with the emphasis on the mong, sipping not Doom, but cans of 9% Triple Cascadian Black IPA in their sitting rooms.

Well, guess what, pubs did reopen (in the main) and it is now like they've never been away.  I travelled back to Berkshire properly for the first time since 4/2/17 when I fully greened the county thanks to Tim Thomas (more on that legend in part 5) with a trip to the long since dead Rising Sun, Stockcross.

Inevitably, in the intervening five years, more gaps had opened up than in Reading's defence and the situation at the start of play looked like this ...... 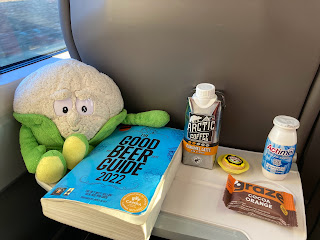 Colin was primed, and my modest semi-Keto breakfast probably wasn't going to soak up the amount of beer I'd drink, but hey ho, at least the waistline is going in the right general direction.

After a bit of jiggery pokery at Paddington and especially Slough (always the worst type of jiggery pokery) I fought my way outside Windsor's prison-esque immediate town centre after ten wrong turnings, and with the time just gone 10:30am, it was nice to see a non 'Spoons open and ready to take my money. 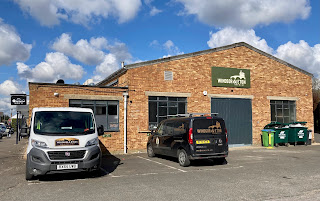 Windsor & Eton Brewery Tap Room (2141 / 3704) was one of FOUR Windsor ticks I now needed, making it the churniest town in all of Berks.  Already sat centre of the room, pint in hand, was #PubMan legend himself, Sir Quinno.  I greet him warmly, a top lad.  One of the first Twitterers I met on my initial 2016 Berkshire trip, where he helped me tick Reading & Caversham whilst introducing me to some pre-emptives which all, strangely, ended up in the next GBG!  What were the chances?  He even taught me how to play bar billiards, then thrashed me.  Not in a flogging with cat o' nine tails kind of way, that'd have been cruel.  That trip really lit the blue touch paper regarding what could be achieved in BRAPA.  But before we chat, I need a pint and like all 2022 brewers worth their salt, W&E's new Mad Bastard Mild is catching my eye.  Took an eternity to get served, the bloke I presumed was before me starts jabbering on about London Irish, whoever they are.  Does he want a drink?  Seemingly not!  Who stands at a bar at 10:30am just for a chinwag?   Conversation moves onto beer passports, before it dawns on the jolly owner and his young assistant that I'm not with this bloke.  Mild has rarely tasted better after this wait!  But now Mild is trendy, what M drink will be promoted in the month May?  I'll go for Mead.  A nicely done brewery tap this, concessions made to homeliness and comfort, money well spent, not unlike Thames Side in Staines. 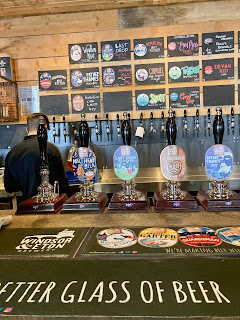 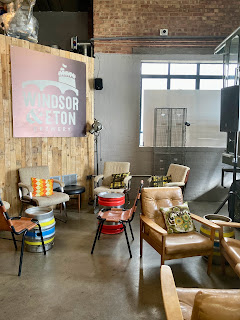 In addition to the four Windsor ticks, we had one just outside in a made up place called Clewer Village.  11am opener, within striking distance of the brewery tap so now was the time to get it done.

Quinno had been here about 10 years ago but suspected it'd had the 'pubby heart' ripped out of it.  I meanwhile had lowered my expectations to 'possible dross' somewhere south of Bawtry so anything would be a bonus.

I did like how the GBG App had a picture rather than a photo of the pub, now let's see how it'd compare with reality. 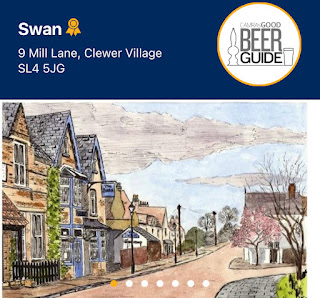 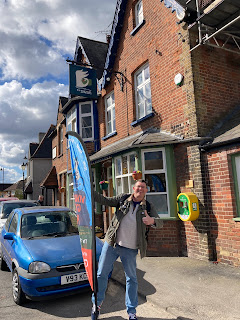 Uncanny, I'm sure you'll agree.  Swan, Clewer Village (2142 / 3705) was as Quinno suspected, 'modernised' beyond all recognition which sounded depressing when he described the old multi roomed carpetted joy of old, but playing it with a straight East Berkshire bat, it wasn't too bad.  Balancing a 20p on a lemon floating in the water did offer one concession to older pubbier days, we've both not seen that in a while.  Our attempts weren't very successful, definitely any other coin would've been easier.  I actually told a passing staff lady "we may as well have chucked 40p straight in the water" and she didn't even argue but made a sympathetic noise.  I didn't like their Swan pub logo because it looked like it was sniffing it's own bum.  I chose the Redemption Trinity ale at 3%, fearing Quinno might force me to drink more than my allotted 'six plus ESB in the Parcel Yard' but it was characteristically medicinal, which I'm not blaming the pub for as it seemed well kept, if that makes sense. 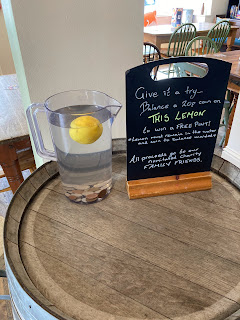 We walked back into Windsor 'proper' for pub three, could it deliver? 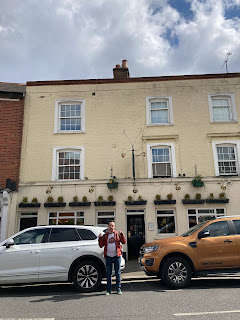 My joint favourite pub of the day was the Windsor Trooper, Windsor (2143 / 3706) - very much a Super Trooper (thanks to Quinno for that one).  Again, he'd not been expecting much but apart from the sad fact that there was pretty much zero customers other than ourselves, it was immaculate in every way.  The North Cotswold ales certainly drank superbly, Quinno amazed to see the use of a sparkler.  "First time ever in Berkshire ever!" he exclaims, or words to that effect.  Not saying that made the beer quality better (even though everyone knows pints taste better with a sparkler on i.e. the northern way) but just a happy coincidence.  In fact, the whole layout of the pub, decor, old mirrors etc gave the place a gentle northern feel, a bit like something you'd find on a railway station perhaps.  Excellent atmosphere for a place so empty! 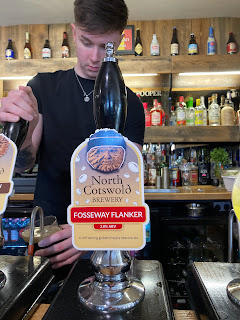 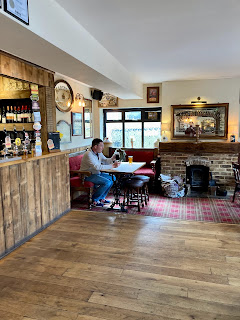 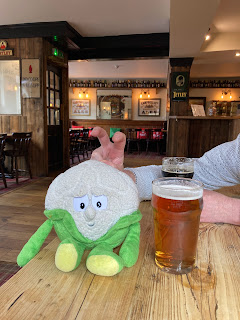 Onwards and upwards, I hoped as we trotted around the corner to this next one ...... 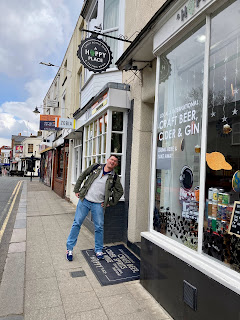 A very friendly welcome greeted us at my outright second favourite pub of this long day (I'll split the blog into two to make it more manageable, plus I wanna play a bit of Hungerford Town Football Manager 2020 before bed).  A Hoppy Place, Windsor (2144 / 3707) was a truly happy place run by really nice people with a strange dinosaur fascination.  I asked Quinno to find out why - I wasn't aware dinosaurs hopped.  "Because we think they're cool" was the actual answer.  Ok then, I'd obviously been over thinking it!  My Burnt Mill was drinking exceeding well as Quinno chats with the staff and I catch up on my Twitter check ins.  "Never too early for a Thornbridge Jaipur" they'd told me, but I knew in my heart of hearts of the day that lay ahead.  Colin meanwhile makes friends with a Space Hopper called Chris (not the last Chris we'd meet today) sitting atop one of the many beer fridges.  Hard to imagine even the most miserable person could come here and not smile at least once. 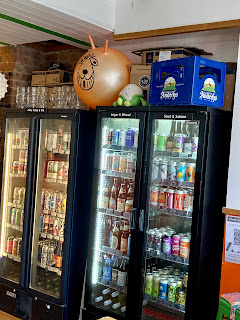 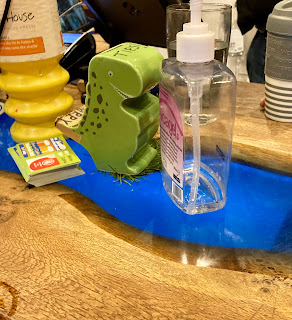 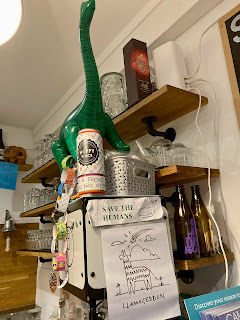 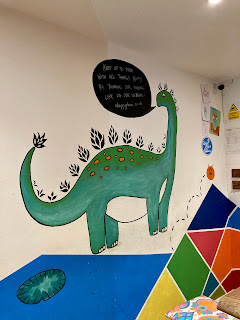 Final Windsor tick coming and what progress we were making.  5th pub of the day and still only early afternoon, no wonder this the first time I have to look at my photos to remind myself! 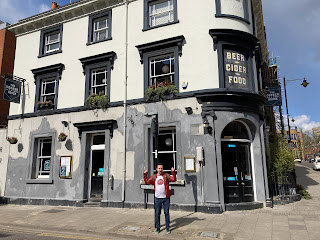 If we're talking pub names that never deliver great BRAPA experiences, this name is right up there.  But this Corner House, Windsor (2145 / 3708) at least offered some kind of external pretence of something solid and Grade IIish.  It opened up into the most London feeling pub of the day.  Big Smoke, go figure, even though our beer choices at least were more Elusive (literally, Wokingham) served my tropically shirted staff.  Decent stuff.  Their decision to put a chair on a table to deal with a drip coming from the ceiling is the kind of box office quirk BRAPA lives for, easily the most memorable thing about our visit here.  What else happened?  Errrm, Quinno?  Anyone? 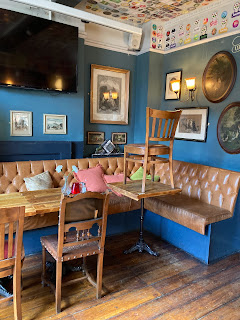 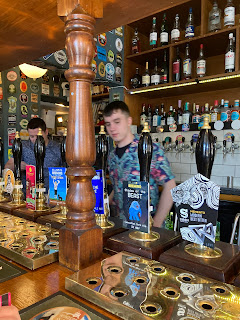 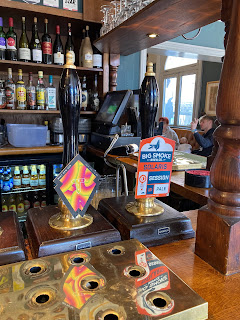 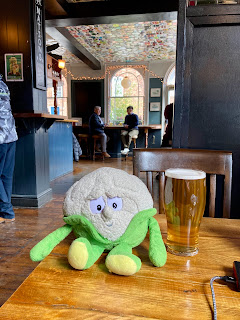 So there ya have it.  'Windsor, completed it mate'.  As the queen once said.   And if you thought some of that became a bit vague, wait for part two which I'll tell you about tomorrow or Wednesday.

Four pubs and a closure in very little detail, though I did have a real moment of clarity in pub eight which was nice.