Some pub ticking days, everything feels a struggle.  Transport, weather, the pubs themselves.

A good sense of humour and a sense of fortitude are required to get you through, you take the 'little wins' where you can, and you tell yourself that it'll all be worth it if some/all of the pubs become regular GBG entries for the next two decades!

Against a backdrop of Storm Eunice and train engineering works, Daddy BRAPA arrived at mine at 06:45 for the long trip to Suffolk, an unfamiliar county for me to visit.   Beyond Newmarket, Exning, Sudbury and countless visits to Ipswich, I'd not been there at all.

Hell, even today's mascot was unfamiliar!  With Colin the Caulifower and KLO both 'nursing injuries', Alex Apple had to fill the size 3's, his first appearance since Hertford last summer.  Twitter, always harsh judges of appearance, didn't like the look of him!

We might've known in advance that the York-Doncaster leg of the journey was going to take an age, but what we'd failed to spot was that Newcastle were away at West Ham for a lunchtime kick off.  Result?  We were basically on a Football Special.

If you haven't seen a bald Geordie burp Stella into his eleven year old's face at 7:02am and then laugh, because you were wisely still tucked up nice and cosy in bed, then bully for you!

After pretty much fighting our way off the train at Peterborough, and with fifty minutes before our Ipswich connection, we needed 'refreshment', and that most magical of morning 'Spoons, Draper's Arms supplied it.  Dad and Alex's expressions said it all ..... 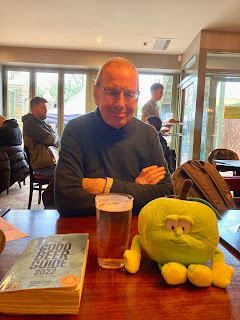 Dad tried his hand at some arty photography ..... 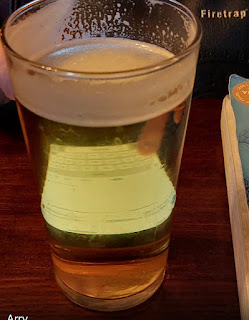 We'd managed to keep ourselves distracted from the Loony Toonies on the journey down by employing a series of mental gymnastics to try and work out how we could get all six ticks done without missing some kind of connection.  We must've come up with about five alternate plans.  Problem is, none of them quite worked! We decided to 'reassess' the situation as the day unfolded.

The Peterborough-Ipswich leg of the journey was comfier and allowed us to stretch out a bit .... but on the down side, speed restrictions due to Eunice made it increasingly painstaking from about Ely onwards. We are over 30 minutes late into Ipswich.  Luckily, I found a bus outside the station to take us directly to our 'outlier' .... to help us get back to within five minutes of our agenda.  The six pub dream was still alive! 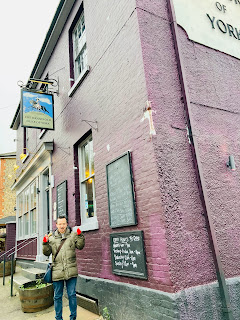 Duke of York, Ipswich (2053 / 3616) is down simply as 'Duke' in the GBG, but every other source shows the full DoY name.  Give it a year, maybe it'll be the 'Prince Andrew' by then, or maybe not.   The 'peaky morello cherry' painted exterior might've been a clue, that this was very much a 'live music' venue as much as a real ale pub.  First customers in, 12:07pm, and a clean up / fumigation from the previous night's hectic gigging was very much in evidence.  The staff were the highlight here, ultra friendly and welcoming.  The barmaid a superstar, and the bloke running around polishing every surface in sight, sweeping every bit of floor, ably assisted by pub dog called Eugene/Fred depending which side of the pub you were in.  One of the loveliest dog's in BRAPA history, and as you probably know, I'm no doggie lover.  "He doesn't normally jump up!" she says looking surprised.  Maybe he likes me, or maybe he can smell the gala pies in my bag.   The Lacons Encore was the perfect starter pint for an all dayer (if we ignore the Brewster's Hophead I'd had in Peterborough).  Dad is admiring what he thinks are flashing disco lights, or perhaps caused by the fake gas lamps.  But on further inspection, we discover it is just the roadwork warning lights outside the pub, reflecting in!  Funky. 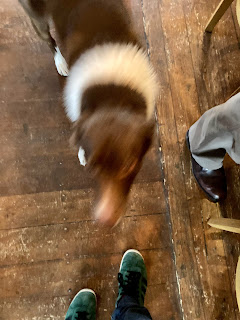 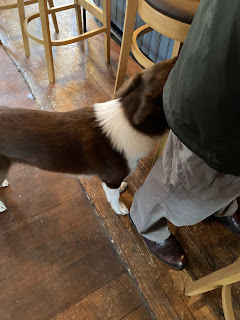 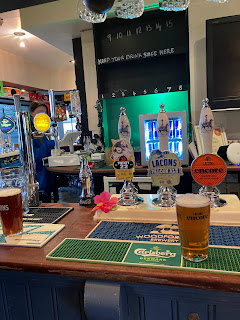 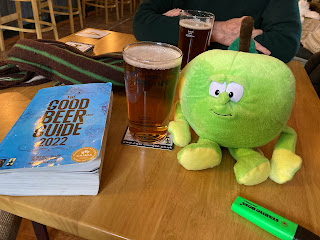 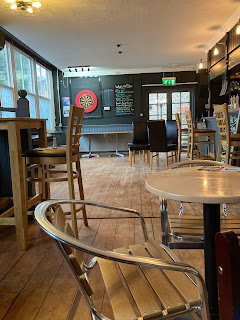 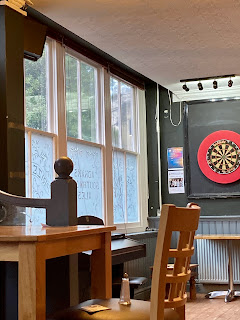 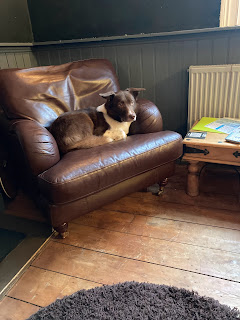 As we step back into the street, we are surprised to see that it has started raining.  Then we notice that the afore mention roadworks outside the pub mean that our bus stop is out of use.  Symptomatic of the little 'pain points' (as we say in the bank) which seem hellbent on spoiling our day.

The next stop is a few streets away, and noticing the traffic queuing nose to tail to get into town, Dad is right when he says it makes a lot more sense to walk to pub two, though the rain now approaching something like 'deluge' levels of wetness ...... 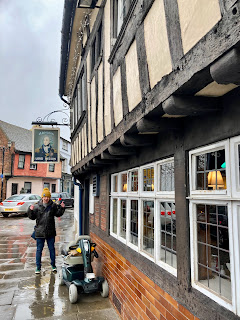 Gorgeous timber framed 17th century joy, 'like wot we have in York' , greets us at Lord Nelson, Ipswich (2054 / 3617) , my penultimate current GBG tick in Suffolk's main town.  'Where the dickens are the handpumps?' is my first thought, walking the length of the bar, before realising that behind the three ladies serving are a series of wooden casks dispensing gravity beer, which I'd have known if I'd read the GBG description.  "Ooh so these are the real ales I take it?" I say, and quite rightly, the barmaids don't even bother qualifying that silly remark with a response.  Shut up Si!   We get something called Red Poll, and 'pow!' pint of the day, and yes I know a couple of people on my Twitter complain about the lack of head on my beer, looking like a pint of flat coke etc. but I say, 'when in Rome ....'  I like a head on my ale as much as the next sane person, but I'm not one of those northerners who brings a sparkler with me to southern trips!  And I don't believe you can always judge beer quality just by looking at a photo of the pint.  More importantly than all this beer chatter, the pub itself doesn't convince me.  Still plenty of old features, low beams and curving seats, but that only makes it even more of a shame that it has had a huge chunk of its character knocked out of it by turning it into a full-on dining venue.  There's a few pre-match Tractor Boys sat around looking like miserable stunned mullets, determined to make this place a pre-match boozer.  It isn't working, they look like fish out of water.  The expression on Nelson's bust matches theirs. 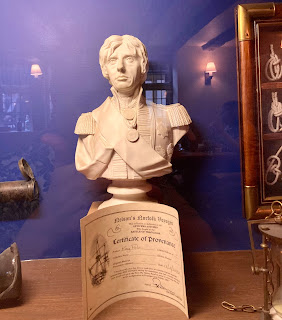 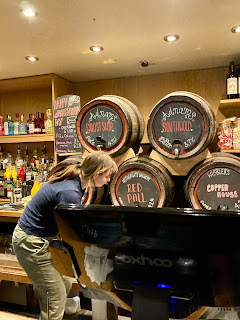 Remember our earlier conundrum with regards 'how to get all six ticks done without missing a connection?'
Well, the solution occurred to us now and was amazingly simple, even if it meant a financial hit.  We walked down to Ipswich station along the waterfront, the town looking less like Monaco than it did on my last 'sunny' visit!
We hopped into a taxi to Woodbridge to speed us up by half an hour, this despite me having just bought us return train tickets.  The kind of decision that is enough to keep our friend Tom Irvin awake at night!  The rain is monsoon like by now, my clothes are sodden and sticking to me, the traffic crawls out of Ipswich, and I need a wee.  Ugh!
Thankfully, taxi dude charges a reasonable fare in the circs, and having initially told us he'd never heard of the pub and hasn't a scooby, he'd recovered sufficiently to drop us off at the front door.
If the first two pubs in Ipswich hadn't exactly whet the pub lover's appetite, then Cherry Tree, Woodbridge (2055 / 3618) would represent a real low point in the day.  Another dining venue, this one airy, light and lacking any of the olde worlde character of Lord Nelson.  Against our better judgement, we take a seat in the centre, too close to the foodie folk, wondering if we should take a leaf out of the other drinkers book and perch on a stool at the bar.  It is very 'Adnams', something I guess I'll have to get used to when I look to 'crack Suffolk' and have a holiday or two down here, in the years to come.  Not that I'm averse to their ales, love a well kept Ghost Ship, problem is, this pint isn't it.  Bit clarty.  The staff are going through the motions, robotic like, far too busy to engage. I'm not drying off either.  The table next to us want to delay their food order waiting for 'friends to arrive'.  When a young lad finally does, he utters the brilliant line "sorry I was late, I was playing video games!" before introducing his new purple haired girlfriend to the hang, one shade darker than the exterior of the Duke of York.  Dad mutters "it's a different world isn't it?" shaking his head.  In his day, you were only allowed to be late to dinner appointments if your ledger didn't balance.  We're having to stick to a strict 25-30 mins per pub to keep on schedule, despite the taxi ride taking some pressure off.  In pubs like this, it is quite easy not to hang around, clarty ale or not.

Today had to improve, it just HAD to.  It would, wouldn't it?  Join me in Part Two tomorrow to find out.
Si