BRAPA is in ..... A WELFARE STATE : SCARBOROUGH NIGHTS, SOUTHERN MORNINGS

Welcome back.  And if you joined us for the previous episode, you'll know that I was on a long bumpy bus ride back to Scarborough on a dark wintry evening, having ticked off four of the best/worst in Whitby and Robin Hood's Bay.

A drunk Mum has to helped off the bus by her apologetic daughter somewhere close to Cloughton.  A couple of times, drunk Mum had tried to get my attention.  I ignored her.  "Oi, you think you are better than me, is that it?" she eventually slurred.  The answer of course, was 'yes, I very much am'.

Being 6:40pm, my final GBG tick of the night (a club) was not open yet, and you can't say that very often.  So I let the bus go right through to the railway station, so I could have a widdle ('in' not 'on', I'd like to clarify for those of you who still haven't forgiven me for Newark.  I lost more followers than Kurt Zouma that day).

I made my way through the Scabby mean streets until the club came into view.  Light on, door open, someone at home.  6:55pm.  Now, if this was 11:55am, I'd wait until 12:01pm in a bid to be deferential,  but at this time of day 'sod it, what kinda place opens 7pm anyway?' was more my attitude. 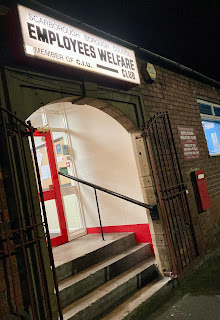 Using up the Twitter character count all on its own, Scarborough Borough Council Welfare Club, Scarborough (2034 / 3597) even made me widen Column A on the BRAPA spreadsheet being the longest named GBG entry since I recorded Upware, Cambs using the correct full name 'Five Miles from Absolutely Fucking Anywhere Inn'.  I crept in rather tentatively, an old dear sat alone on a pub bench, presiding over an empty Quality Street tin filled with raffle tickets.  "Are you open yet?" I enquire hesitantly.  "Hmmm, not really" she replies.  "Oh.  I'm just after a pint .... I AM a CAMRA member" I explain, wondering if that'll make a jot of difference.  "Oh of course, that's absolutely fine!" she says, effortlessly easing herself up into the space behind the bar in one fluid motion.  Impressive.  My ale is good and fresh, though slightly too fizzy to be a great pint.  She soon sits near me again, explaining her initial reluctance was due to thinking I was 'one of them snooker players', indicating a glass window where snooker tables are indeed housed.  Where exactly did she think I was concealing my cue?  She talks to me on her love of Whitby's Little Angel, and her York relatives, before a few chaps come in, most carrying unconcealed snooker cues.  "No one knows who is playing who tonight, that's the problem" someone complains.  They all agree it is Dicko's fault.  Poor Dicko.    A bloke called Simon with the voice of Keith Lemon chats about a bloke called Keith with a slow puncture.  It is all very confusing.   I'm far too afraid to try and locate the Gents, apparently behind the glass window down with the snooker tables, which has now begun in earnest.  I thank the stewardess (if that's what female club owners are called) and take my leave.  Good place. 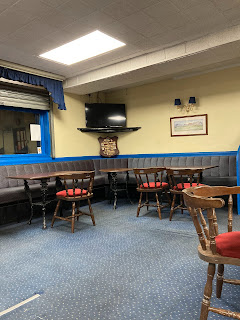 The old lad I was talking to mostly mentioned a Scarborough pre-emptive on the way back to the station, and it triggered a memory of the same place being mentioned by someone in Whitby's Waiting Room.  With about 35 minutes until the York train, perfect timing, it had to be done. 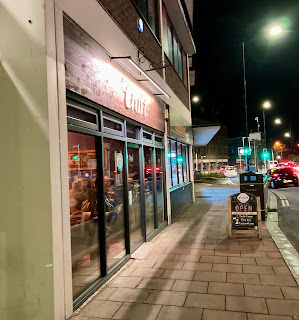 Historically, I don't have a lot of luck with Scarborough pre-emptives, by which I mean Firk Inn has never made it into the GBG yet.  Having said that, it did only have Doom Bar on, and a Seadogs fan told me he could kill me in a few seconds by just pressing my neck in a certain place.  And now I've visited Craft Bar, Scarborough I'm even less convinced of its GBG potential, despite a nicely kept pint of Rudgate Chocolate Stout, the only cask on.  The focal point was the 'craft cans fridge', that's what every other customer headed straight for, and there were a couple of lively groups in.  My main gripe however is the staff.  Woefully disinterested/distracted, I couldn't rest my elbows on the main bar for the sheer volume of empties stacked up.  And when she did look up long enough to serve me, she was so quickly back to her laptop on a table in the corner, she'd forgetten to give me my pint and I had to shout her back!  Table was sticky.  It all felt a bit 'for the sake of it' rather than a concerted effort to offer something new and fresh to the Scabby beer scene. 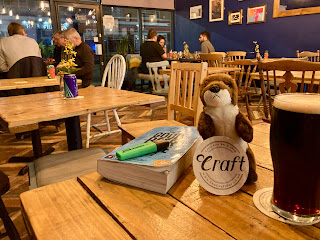 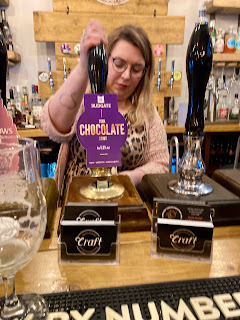 Still, if it does make the 2023 (or any future) GBG you'll hear no complaint from me.  I'll be sat there, one late Oct/early Nov, green highlighter pen in hand, cross ticking, I'll get to the Scarborough page, and probably say out loud "waheyyy, nice one Craft Bar.  Si, you are a genius" as often is the way when pre-emptives come good.
Train home all went according to plan, and fast forward 36 hours and I was back on the road (well train) for my first southern BRAPA trip of 2022.
Keane Lewis Otter OUT!  Colin the Cauliflower IN!  Fresh snacks .... PACKED!
I'd heard we'd be expecting more engineering diversions around bloody Lincolnshire again, so imagine my surprise when we tootle into Kings Cross a few minutes after 9am.
Well, I wasn't due to meet today Hertfordshire friendly chauffeur guests until 11:42am, and with only 5 pubs on the agenda, was there an early opener in North London I could do now to make up the six?
A Wetherspoons in Stoke Newington you say?  Ding dang do, that'll do!  As they say in Bolton. 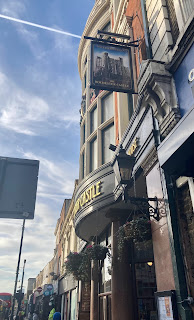 Very different from my only other BRAPA experience of Stoke N, a pub called the Jolly Butchers where posh twentysomethings drank red wine under low lights surrounded by purple velveteen curtains.  Rochester Castle, Stoke Newington (2035 / 3598) was in fact, the polar opposite.  Bright morning sunshine streaming in through glorious bay windows, a healthy gaggle of old codgers settled in with probably their 4th pints already, just shy of 10am.  The barmaid greets me warmly, even asking about my day.  Not sure she really needed to know the intricacies of mid afternoon closures in Wareside or lifts between Puckeridge and Standon, but I told her anyway.  Seemed a long way to come for a pint of dark mild from Hull, but if I order it, we'd definitely beat Preston at home, right?  Right?  Besides, one of my Hull City chums Chris D hails from Stoke N.  On Tuesday, he'd perch on my seat arm at Derby's Alexandra and speak to me at length about this pub.  Back in the present, and I could only 'admire' the multiple fires and some pretty questionable artwork (elongated Daniel Defoe looked more like Zlatan Ibrahimovic to me, apparently they had classy artwork in the past but it all got sold, I think) , but on the whole, this pub just solidified in my mind that the classiest Wetherspoons are always to be found in the place they started, North London.  Someone on my Twitter even told me this was the third 'Spoons to ever open, and the longest standing one still open. 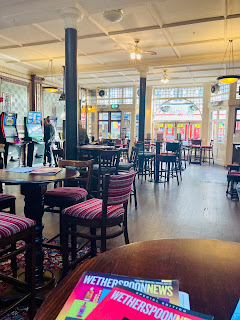 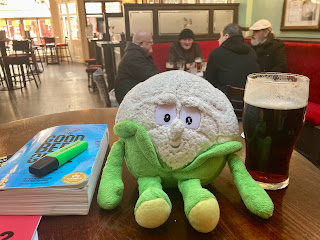 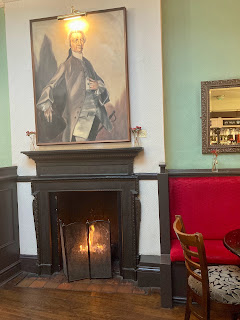 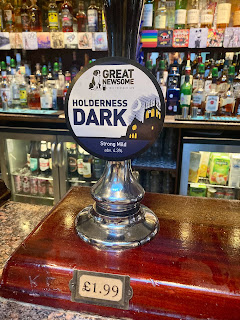 One more pub to tell you about today, as I dashed off to get my connection.  I missed one train out of Stoke N to Seven Sisters by a cat's cock hair, but I wasn't too pushed for time as I made my way back to Finsbury Park, where BRAPA Pub Man of the Year 2021 instructed me to get myself to a place I'd never heard of called 'Watton at Stone'.
Bus replacements meant our regular Stansted line was out of action, so they'd kindly agreed to drop me back on the Hertford line.  It had meant changing the initial pub agenda three times, but definitely worth it.
I arrived on time, and some weirdos got in my way as I photographed a Nigel Gresley blue plaque .... 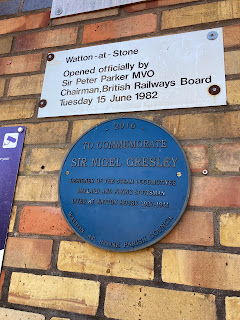 Before long, a smart red car pulls up and Simon D waves out of the window.  Daddy Dewhurst is driving today, so as a homage to Jane Stuart when she met Daddy BRAPA, I greet him with a cheery "hi Daddy D!"  Sure he loved that.
Unlike the Allen's Green, Bishop Stortford, Saffron Walden's and Thaxted's of this world, the Dewhurst's have absolutely no idea about today's pubs, which makes me feel better, cos I feel it'll be more interesting for them too.
After a few confusing country lanes, we arrive at today's second tick shortly before noon ..... 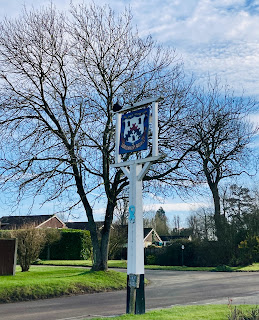 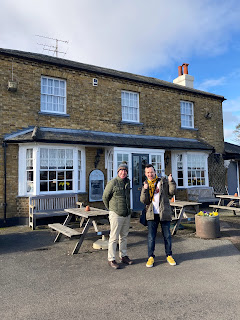 It's a bit of a slow, unpromising start to life at the Lordship Arms, Benington (2036 / 3599) as a few shadowy figures stare out at us with blank eyes, and when the main bloke unlocks the door, he doesn't exactly open the door, shout 'hallo BRAPA faithful!!', toot his bugle, and welcome us into the bosom of his bulging heart.  The pub itself has virtually no sign, just looking like a house.  I sort of like that, but on the other hand, I was starting to worry this was going to be a pub that hates customers and opens for the public under sufferance (and yes, they do exist).  Luckily, I was wrong and so are you.  Pub of the day material as it transpires.  FIVE of the Six ales are from Yorkshire.  One is from Small World, Shelley, West Yorks, which to nick an Eddie F joke from our Holmfirth night "Small World isn't it?"   Anyway, it causes a chuckle in the ranks when I tell them I've travelled from York.  Soon, main guy, who is actually lovely, is schooling me on Black Sheep-York Brewery-Yorkshire Heart politics.  My brain can't cope with the information overload.  The conversation is so random.  'York is very good at publicising itself', the lady (his Mum?) proclaims, for when she bought shoes from Stockport, twice, they came with a brochure of stuff to do in York.  Then, quite unprovoked, she starts off on The Russians and Maltese assassinations.  Crackers, the lot of 'em.  The pub itself is a delight, vintage telephones prevail, a superb worn carpet.  In fact, had we have visited it later in the day, we'd probably have appreciated it even more as this standard would not be maintained.

Well, there ya go!  I'll tell you about my other 4 ticks, my 'emotional' Parcel Yard return, train chaos sparking a run of bad luck, and a bit from Derby, on Sunday.
See ya then, Si