With Alrewas and Barton-under-Needwood safely greened off (the first two alphabetical GBG pubs in Staffordshire too, which makes me happy), it was time to take the bus back into Burton for the remaining four .......

What I forgot to mention in part 1 was that this was an overnighter.  NOT because I was expecting a repeat of my drunken 2019 visit here, but more so because one of my remaining pubs didn't open til 5pm (which is very rude behaviour on a Saturday) and being a bus ride away, I didn't want to leave myself panicking about late trains to York.

I jumped headfirst off the bus before we hit Burton centre, leaving me with a shorter walk to my Premier Inn, which is a 25 minute walk from town.  You'd have to speak to Former Si to understand the rationale behind staying here ahead of the Travelodge, pretty much opposite my sixth pub.

After a speedy check in where the staff applauded the reasons for my visit (well one did, the one checking me in looked bored silly), I marched to the centre.  In the time between getting off the bus and getting to my room, the new look revitalised Hull City had gone 2-0 up against Swansea.  So I dashed merrily towards Burton's GBG ticks on a cloud of Black & Amber joy. 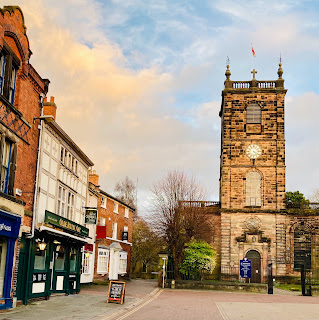 Situated in a quiet corner of the market square next to the church, Old Royal Oak, Burton (2026 / 3589) was this year's mystery Burton tick I'd never heard of before.  It will probably fall into that 'GBG guest appearance' territory that the Last Heretic and The Crossing have occupied in recent years.  The reason for GBG inclusion is immediately obvious, now owned by a brewery called Fownes, from Brierley Hill, having a full range of their beers on, and an upsetting modern shaped pint glass I could never quite grasp!  One of the oldest pubs in town, it felt rather sparse and lacking atmosphere on my visit.  I wait patiently whilst a bloke who'd been here once before was waxing lyrical on his favourite Fownes ales, wife eye-rolling, but he's jollied along by the excellent landlady, who immediately spies Colin and says "hiiiii Colin!" and I'm like "he's got an unconvincing Brummie accent so do you really want me to do his voice?"   A threat of a DJ setting up in a raised area to my right doesn't materialise, which I'm almost sad about.  Was I here just an hour or two too early?   I take my pint of Elephant Riders to the back of the room, and I'm pretty anti-social in these early stages .... so invested in Hull City, I can't relax until full time has sounded and they've won.  Once that 2-0 news comes in, I raise my head to join in.  The bloke from earlier is enthusing over a coffee beer.  I join in by saying "you can't peak too soon with darks" which causing much sage nodding!  As soon his wife nips to the loo, bloke is straight up to the bar, asking the younger barmaid what her name is.  WHAT A LAD!  After ascertaining she shares the same name as Postman Pat's black and white cat, wife returns earlier than planned (just a wee), and bloke, sensing wifey eyes boring into the back of his head, quickly sits back down.  You had to commend the sheer bravado.

Just a few minutes shy of 5pm, it was time to take the bus out to my awkward outlier.

Only a short ride, in fact, Stretton felt more like an suburban extension of Burton than in place in its own right, but the GBG have listed them separately, so who am I to argue? 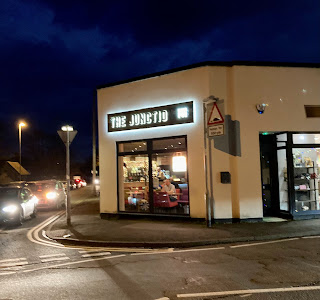 Yes, with hours of 5-10pm Fri & Sat, plus a more recently introduced Sunday daytime slot, Junction, Stretton (2027 / 3590) was a great one to get greened off.  It can't have been open too long when I arrived, but the place was bustling, and everyone seemed to be in the process of establishing themselves as drinkers who'd be here til they were kicked out!  I sensed a kind of 'champing at the bit' restlessness about the folk, a bit like at Great Ayton's Tannery.  Limited hours leaving the punters wanting more?  It ain't a bad tactic really, though not so good if you are a ticker.  My visit would have to be rushed however, the next bus was only 25 minutes away.  The kind couple behind the bar served ales from Blythe brewery, another new one on me, from a place called Hamster Ridgewell.  A great centre back in his day, big cheeks, terrible on loan at the Tigers.  I suddenly realised how much more palatable this pale ale was than the Elephant Fownes one, which had been kept great, and I'd THOUGHT I loved at the time, must be to do with hops or something I don't understand.  The lively crowd started to relax a bit, which put me at ease.  So I went to test out the quirky loos that Eddie F had told me about, with green and red pedestrian lights to tell you when weeing was allowed.  If only they'd had them in Newark Northgate.


The bus stops by the church, I'm the only passenger still onboard by the time we are back in Burton proper.  The city centre streets are deserted too.  Saturday, just gone 6pm.  Tsk.  Where is everyone?

I'll tell you where, all crammed into the same popular pub! 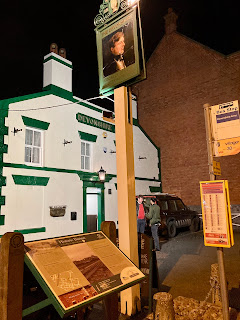 Devonshire Arms, Burton (2028 / 3591) is a bit of an institution.  I know that from my Twitter #PubMen alone, 'tis very well regarded.  So much so, that back on that fateful drunken summer night in 2019, when this pub was merely 'pre-emptive', I was encouraged/persuaded to go by my followers who saw I was in Coopers Tavern & said I had to try this one.  I'd had nine pints, I'm only small, I was thinner pre-lockdown, and I actually remember half hoping, they'd tell me either (a) I was too drunk or (b) I'd missed last orders (it was gone 10:30pm).  But the bald chap was lovely, the ale on first sip was immaculate, and a few late drinkers smiled over at me.  I could, despite my hazy state, appreciate what a great pub this was.  But I made the mistake of closing my eyes.  The room started spinning.  Worried I was going to be sick, I raced to the loo.  But I was ok.  But no way I could finish my ale.  I'd drunk less than a third.  I therefore refused to count it as a 'tick' when it appeared in the GBG the following year.  Unfinished business.  I have one other GBG pub in the same situation as this!

TOTALLY different atmosphere tonight, earlier evening, standing room only for the most part.  Four burly Bass bar blockers (the worst type of bar blocker) are like "GET YERSELF IN AT THE BAR MATEY WAHHHEYY" because for some reason, I'm lurking behind them like a timid mouse who'd never been in a pub before.  I get my Bass, and the one remaining table, hidden behind a pillar and fruit machine in the centre.  An old lady on a bench hasn't read the script (the script being 'jovial atmosphere', 'strangers chatting', everyone having fun) and gets well pissed off when a 'new' couple and her fellow bench companions try and squeeze up to allow more people to sit.  If I'd initially been annoyed to have a table that offers no vantage point for pub observation, by now I'm grateful to have anything.  A trip to the loo helps me get my bearings, I'm in the opposite room from my 2019 visit.  Cracking place, of that I have no doubt, the Bass is on top form, but just not the easiest ticking circumstances I found myself in.  Weirdly, I'd preferred my 2019 visit!

I could feel the ale kicking in by now.  One tick to go.  I remembered walking past this one on my 2019 trip, because it was located so close to the Travelodge I (sensibly) stayed in on that occasion. 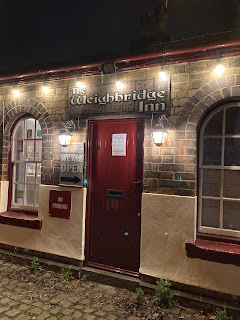 I tell the Shifty Forlorn Looking Mark E. Smith (SFLMES), smoking outside, that I'm very happy for him to be in the outdoor photo if he wishes, but he slurs something at me that sounds like 'Drink Y'Self Fatter' and staggers over to the right, thus making the above photo sadly boring.  I clatter through the main door at Weighbridge Inn, Burton (2029 / 3592) and I'm not totally enamoured by the place on first glance, especially as the lady behind the bar seems totally floored by whatever she's been sent on her phone, struggling to regain concentration to serve me.  I'm not in Ware (home of British pornography) yet, that is next weekend, so surely it wasn't anything too dodgy?  Time for a Stout, a Coalface Stout, it feels right. I tell her this (she's still smiling about whatever that 'thing' was on her phone), Bass bridging the gap for me between my earlier pales and this.  The beer screen looks a bit Ceefax/Teletext, the locals in the main bit seem a bit 'knowing', people talking about beer is always a bit of a turn off I find, and it smells of Play Doh (Mop Top Hair Shop to be precise).   So I go through to the small room to the left, where to my horror SFLMES is the only other person.  This is awkward.  We both glance away, pretending neither of us have noticed the other or can remember the awkward little exchange outside.  But as I sup slowly, and SFLMES finally leaves, I can feel something strange happening - this pub is getting a hold of me, and I'm actually starting to enjoy it!  Like really enjoy it.  Like 'shall I stay for another?' enjoy it. Maybe I did, I can't remember, it was only just gone 8pm I know that!  And I can't explain why this place started to get its claws into me, but it did!  Mauled by the Weighbridge. 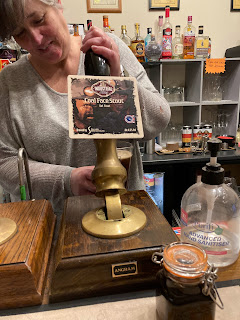 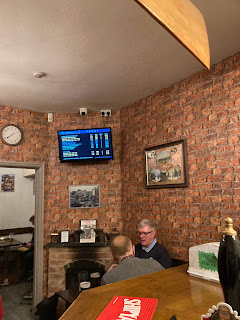 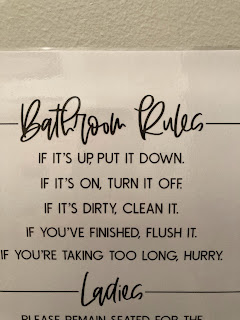 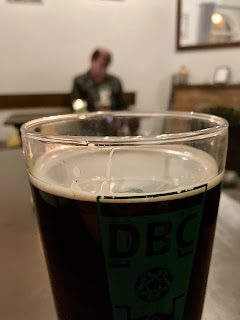 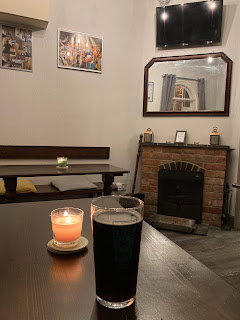 Burton never disappoints, and for a fourth consecutive trip here, I stagger back towards my digs happy but not really knowing what's going on.
Join me on Wednesday, where I'll tell you about a particularly thirsty Thursday on the Yorkshire coast.
Until then, thanks for listening, Si