It will go down in history as one of those 'unforgettable' holidays.  Not in the conventional 'wow, that was utterly amazing' sense although there were plenty of aspects to enjoy.  No, I'm meaning more in the surreal, 'is this really happening?' sense, brought on by the Spanish lockdown three days into our stay.

Back in Oct/Nov, when Father and Mother BRAPA gave me the opportunity to join them, all expenses paid, in a posh villa on the southernmost tip of Lanzarote, it was a no brainer ....  despite 10% of my brain saying it'd mean sacrificing a U.K. BRAPA holiday, where I could've perhaps got 25-30 new pubs ticked off in a week.

On the flight there, a week last Thursday, there was no mention of the 'C' word, as our pilot on the journey home so delicately put it!  Christmas, Cancer and Cunts all have nothing on Coronavirus in the Current Climate.  And if that isn't alliteration, I don't know what is.

'Our man on the ground Pablo' (brother of the owner, more from him in part two) dropped us at our Villa on the outskirts of Playa Blanca and all was well with the world ....... 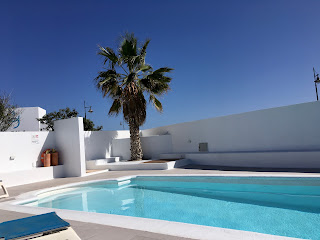 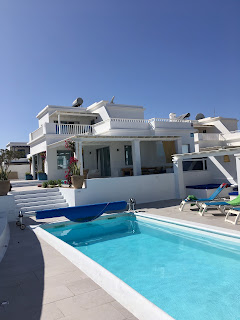 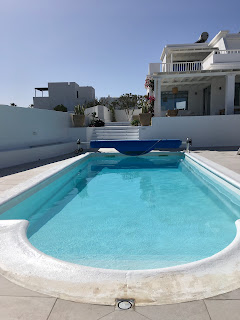 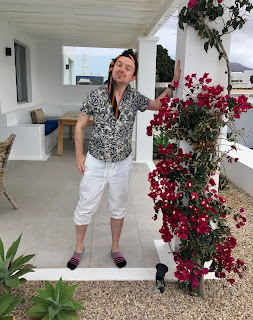 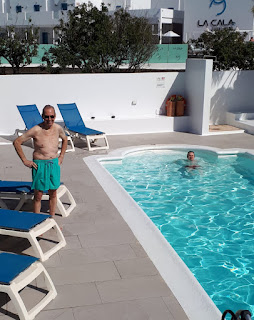 After a peaceful first evening of crusty bread, olives, tomatoes, cheese, chorizo, red wine, and errrm Toblerone, the following morning dawned with Mother BRAPA and I doing a recce of the surroundings.  I made it clear to her that finding bars/pubs was a top priority, with LAPA (Lanzarote Ale Pub Adventure) in mind, the Rubicon area with all the shops, harbour, restaurants etc. was a good place to start and only a 10 minute walk.

The first sign that 'something might be up' came when Irish music pub, the promising looking The Flagship, hadn't observed the 1pm opening times listed on Google Maps ......

An hour later, I dragged Father BRAPA for our first drinking foray and we started in the Blue Note which appeared on my list of recommended bars. 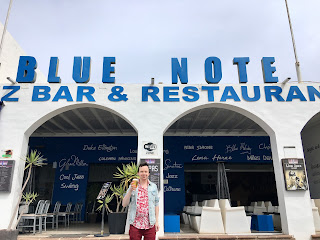 It was very blue (colourwise I mean, not language or rudeness, not that I'd understand) and again had a strong music theme.  Inside was an impressive grand piano, but we sat out by the harbour and in the absence of any sort of bar or beer menu we did the classic 'duo cerveza please!' English thing, losing confidence as we got to the por favor bit.  Hopeless I know.  An uncompromising lady brought us two Stella Artois glasses filled with beer that was possibly the same, though it perhaps didn't taste strong enough, though I did ask Dad if he was getting an urge to go home and beat his wife.  He merely laughed.  All was well, but as we tried to get two more, she told us they were closing and looked at us like we were drunken English rats when I went "awwwwww", but mid afternoon closures are eerily too rural South Yorkshire for my liking, siesta time or not. 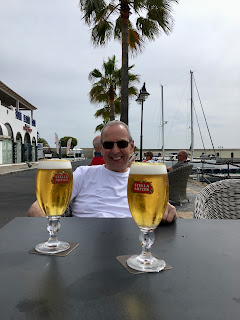 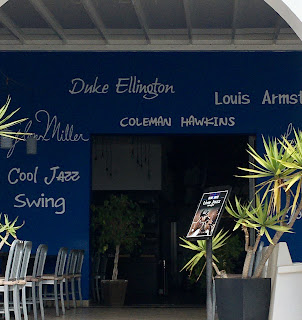 We wandered along the harbour, I noticed the Flagship was still closed but in the building beneath it, people looking at us expectantly as we dillied and dallied, yes, it was a sort of outdoor bar, think Claygate or that funny thing in Cleethorpes people love to talk about (not Tom) ...... 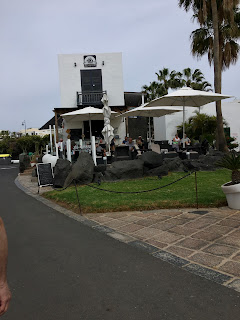 And it seemed we had hit the jackpot at Bar Terraza, which hadn't even appeared on my 'recommended' LAPA list (pre-emptive?) as they sold local beers which tasted great compared to what we'd just been drinking! 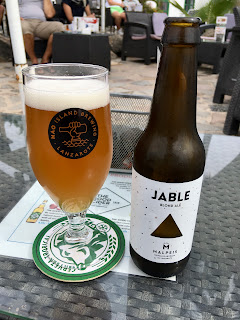 We started on the Jable with the logo reminiscent of a British beer I'd seen before, Dad persuaded me we'd come back for the other (stronger) two at a later date, and they even did their own cider so perhaps Mum could join us too?  Little did we know what would follow.  Anyway, a very pleasant place to sit, friendly staff and plenty of British tourists who looked up when Dad and I made some joke about Accrington I can't remember.  The loos were in an outbuilding, you had to follow arrows around the backstreets, and who should I see having a smoke and a coffee with two lotharios but Uncompromising Lady from the Blue Note.  I smiled and waved, and she sort of spat on the ground, which I assume is Lanzarotian for 'hi there friend'.  The weather had reverted from the sparkling sunshine of day one to the more regular 21 degrees, stiff breeze, overcast with some warm sunny spells.  But Dad was right, time to get back to our villa for a swim and a nap! 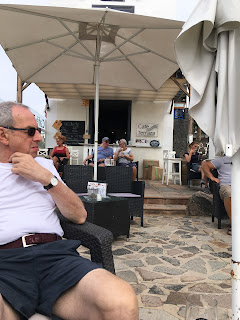 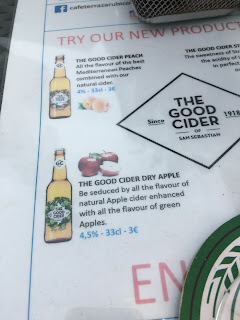 There was plenty of life in the Rubicon later that evening as Mother BRAPA captured Dad and I excitedly discussing potential Bass pubs in Bristol on Apr 11th (probably) over what would be our one and only meal out, a pizza way too garlicy and the thick layer of rubbery cheese that wasn't even Mozzarella .... I mean how can you get a simple pizza so wrong?!  Luckily, good staff, a cracking pint of Heineken (trust me) and a caramel after dinner liquor on the house meant we'd planned to go back ....... 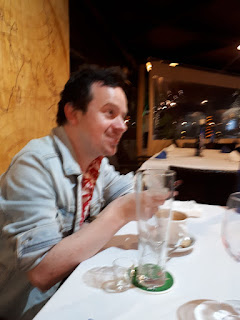 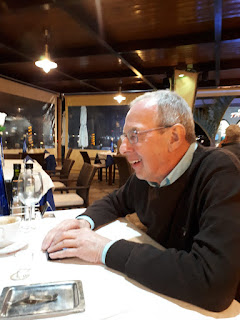 The following morning (Saturday), things still seemed normal as we explored the 'old town' or 'shithole tourist bit' of Playa Blanca which reminded us of an unholy alliance of Blackpool, Bridlington and Scarborough, but with more aloe vera and less saucy postcards.

However, I had slyly noted down a few promising pubs (well, bars) and LAPA was taking shape, we (I) figured it'd be nice for Mum & Dad to do their own thing some days, and me to go pubbing, BRAPA style!

A quick note on the cat situation.  Plenty of stray cats about (and I don't mean Brian Setzer hahaha, sorry, that's one for the rockers) but the island had kind of 'embraced' it by allowing you to sponsor them and building them little huts, and putting water and food down for them on the soily side bits of the walkways.

All was going swimmingly then, but we'd wake on Sunday to find a very different atmosphere on the island.  Join me for tales of that tomorrow .........