If there was one drug I'd like to be invented to assist with BRAPA, it wouldn't be the ability to stay sober for longer to visit more pubs, or even to retain a crystal clear memory recall of events.  No, it would be some bladder strengthening device so I could drink my pints, hop on public transport, and embark on long cross-town walks without thinking 'where's my next opportunit-wee?'

After all, Kendal isn't Newark.  You can't just whip it out, act like a fire hose, and hope for the best.

And back in the town after a bumpy bus ride back from 'Elterwater',   I was in agony and the shopping centre bogs were closed.  Nooooo!  I had to run back to promising preemptive effort, Ye Olde Fleece, and edge in through a back fire door I'd spotted earlier, only ajar because a work man was measuring a door frame.  What a relief!

Then, I had to run back to the bus station to ensure I got the X6.  "You have a devoted young lady friend there!" a toothless old man says to me with a wink, indicating a girl in school uniform waving off her mates on the seat behind me!  "I don't know her!" I protest, realising a paedophilia misunderstanding could be even more awkward than my Newark incident.

The whole bus ride to my 27th and final BRAPA pub of the holiday was akin to a school trip, dropping off and picking up spotty dropouts from places as varied as Grange over Sands railway station, the Prizet BP garage and Brettargh Holt outside the Heaves Hotel, with the emphasis on the 'argh'.

Relief came in the form of the village of High Newton on a bright but increasingly chilly evening, the pub perfectly framed in the shadow of the lowering sun ..... 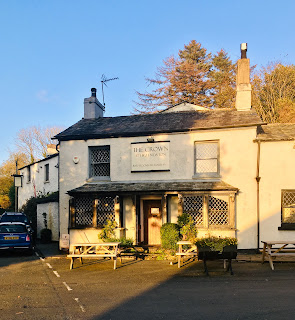 'Good things come to those who wait' is a reasonable BRAPA adage*, and having failed to get here in September due to Uncle Funeral curtailing my Barrow trip, and again last Saturday after taking the wrong bus at Greenodd, I can happily report we end on a high at Crown, High Newton (1596 / 2813).  Local bar blockers aren't such a problem when they welcome you into their 'lair' with jokey comments about the AWOL barmaid, and rather than being awkward, the wait for her to reappear was almost 'welcome'.  High Newton is probably far enough from the Lakes and near enough to Ulverston/Barrow to offer me something lacking in this holiday, a bit of warmth and compassion from my fellow drinkers.  I'm sure they get curious walkers visiting, but this was more locals pub than glorified restaurant, not too dissimilar from the Sun in Coniston or Black Dog in Holmes Green in style.  I took my pint to a table behind the locals, and a cute dog bounded over to say hello, though in truth it was more likely it wanted to hump Martin the Owl or snaffle my EMCs (Emergency Mini Cheddars).  As strains of Billy Joel and Spandau Ballet filled the old building, I declared 'punk's not dead but my liver is' which didn't really make sense, but who cares.  A local told spent so long telling me where the bus stop was (even though you could see it from the front door), I nearly missed it, but I'd rather men like him than a repeat of Sedbergh.

Back in Kendal with the darkness setting in, I calculated I'd actually only done four pubs today, so that meant two late preemptives.

After all, RM told me Kendal is notorious for chopping and changing their GBG entries, one year, the four that were in were ALL replaced!  That must be unprecedented or something.

In a former mill complex, now home to industrial units, arty crafty things, and inevitably, a couple of micro style bars, I realised I couldn't get to the Barrel House as it didn't open til Thursday, so went instead to the recently deguided Factory Tap. 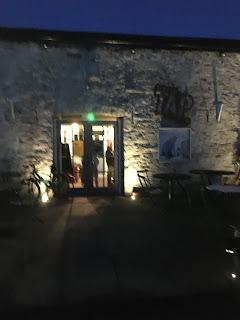 A few locals had recommended it to me, two men had actually declared their astonishment it wasn't in this years GBG.  It did have lots of ales on, the staff were fairly attentive, and the place was surprisingly packed for a cold Wednesday evening in October, I thought.  It didn't help that attached to about 50% of the people in here was a lead, and on the end of those leads, twogs galore.  And they all hated each other.  Making for many barked confrontations, in a small building.  Result, a non-relaxing experience for me, on my triangular table by the door.  The most notable clientele, a group of loud southerners slightly watchful of my photography, and sure I recognised the big bloke as that dude from Murder in Successville, but why he'd be in Kendal, I'm not sure.  They got a taxi n left shortly after.  Not a bad Tap but can't say it gripped me. 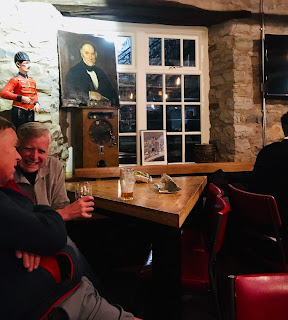 My intention was to end this epic BRAPA adventure in a Twitter recommended club called Ivy Leaf, but the locked door, weird intercom system, and fact it wasn't and probably never has been GBG, meant there was no guarantee I'd be allowed in so gave it the swerve.


As it was, the next turning took me to something called Indie Craft Beer where I thought I was the only customer (until I later found a cosy upstairs by the bogs) so chatted to our Indie-ish haired owner, a nice chap, and in the absence of cask (he tells me they plan to put some on soon cos I needed to check how preemptive it actually was!) I got this gorgeous one called 'I'm Spartacus' from New Mills in Derbyshire.  We had a nice chat about the local pubs, my BRAPA holiday etc and he probably said lots of interesting things I've forgotten in the grip of sixth pint of the night.  When I left, it was good timing as a man he knew came in, ordered the same ale, and I left to them doing a theatrical yet inevitable I'm Spartacus, No I'm Spartacus routine which had me smiling all the way to Tesco Express for a final time.


It'd had been a cracking hols, the Cumbrian map greening up nicely, but I'd only get one day off tomorrow before Friday brought some outer-York fun, so join me for tales of that on Thursday & Sunday. 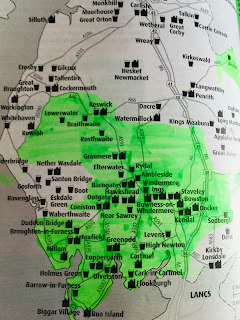 * But if that is true, the Moon on the Square 'Spoons in Feltham, West London, will be Ultimate BRAPA Pub of All Time if and when I finally make it!